Hunt prepared to send Lesnar back to pro wrestling 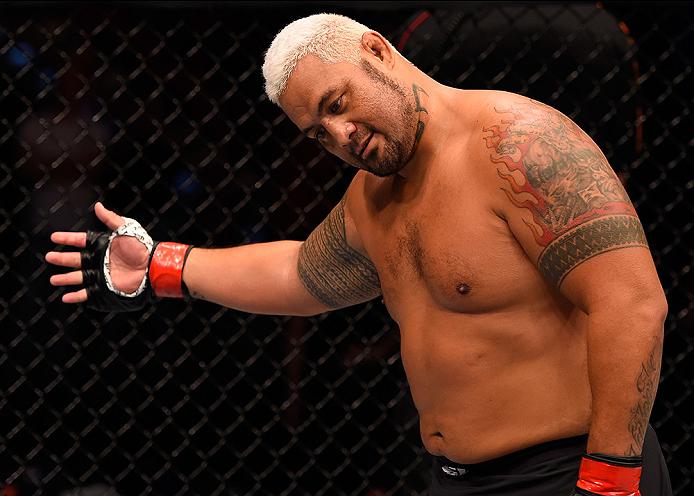 Mark Hunt sums up his fight against Brock Lesnar this Saturday in the co-main event of UFC 200 succinctly.

“If he can’t get me down in the first round, he’s getting knocked out.”

In 2009, when Lesnar was the UFC heavyweight champion and the most intimidating man in MMA, Hunt’s confidence would’ve seemed delusional. At that time, Hunt had not won a fight in years. The “Super Samoan” seemed all but washed up as he floundered in Japanese promotions.

A lot has changed since then. Hunt is now ranked eighth in the UFC’s heavyweight division after fighting his way back to relevance with KO victories over elite opposition. The “Super Samoan” has established himself as one of the most dangerous punchers in the sport and a legitimate title threat.

Lesnar, on the other hand, hasn’t fought since 2011, when he exited the UFC after a bout with illness and two defeats. Whether he will look like the dominant Lesnar of old is one of the big unknowns ahead of the July 9th fight at T-Mobile Arena in Las Vegas.

Hunt, whose last fight was a first-round KO victory over former champion Frank Mir in March, gives a deadpan assessment of Lesnar’s decision to return to MMA.

“He can do pro wrestling and he can do fighting, I’m in shock. It doesn’t really matter to me in the end.”

While the 42-year-old Hunt doesn’t appear to think much of Lesnar’s accomplishments in professional wrestling, he’s not doubting that Lesnar deserves to be in the UFC’s Octagon. It’s a wise attitude to take against the former NCAA Division I wrestling champion who once turned the UFC’s heavyweight division on its head.

At least on paper, Hunt’s blunt take on his opponent’s prospects is right: the 38-year-old Lesnar’s best chance of victory is getting the former K-1 World Grand Prix Champion to the mat. But taking the 2016 version of Hunt down and keeping him there is no easy feat. While Hunt struggled with grappling in the early years of his MMA career, it’s an area of his game that gets better with every Octagon appearance.
RELATED CONTENT: The Beast is on the Hunt | The matchup: Lesnar vs Hunt | Mark Hunt fighter bio

An exception came in the form of his May 2015 fight against current UFC heavyweight champion Stipe Miocic. It was a bout which saw the Super Samoan taken down at will before losing by TKO in the fifth round. It’s an anomaly Hunt blames on a bad weight cut.

“The only time I’ve been taken down with ease is when I fought Stipe, and anyone could’ve taken me down, probably not you, but anyone could’ve taken me down. I lost 12 kilograms in one day and I had nothing,” Hunt said. “I know what I’m doing when it comes to grappling, I should be a black belt. (Lesnar’s) going to have a hard time, anyone in the whole world is going to have a hard time taking me down, and if they can’t, well I’m knocking their face off. I’m knocking their lips off. That’s basically what’s going to happen to Lesnar.”

Fighting the currently unranked Lesnar wasn’t part of Hunt’s plan for 2016. He expected to a follow a linear path back to a shot at the title. But Hunt isn’t complaining ahead of his fight on one of the UFC’s biggest ever events. 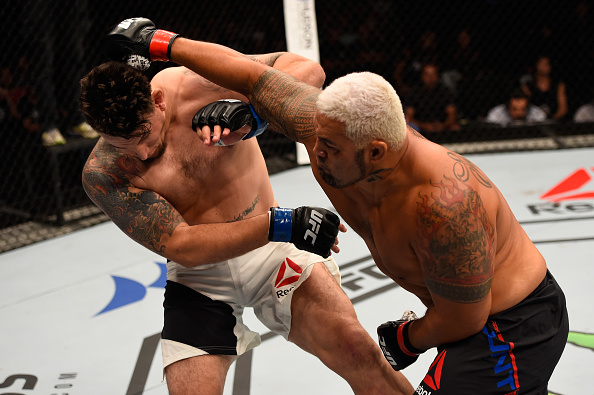 “I was trying to get to a title shot, I’m trying to get a top five guy now and make my run for this title. I’m only doing what I’m told, the boss is saying you’ve gotta fight Lesnar I said, “Okay cool, that’s fine.’ It’s not my call then. It’s a fight and his comeback so I’ll send him back to pro wrestling.”

The announcement of a fight against Lesnar has also tested allegiances among Hunt’s family members, at least one of whom is a Lesnar fan. The father of six, who has planned a post-fight trip to Disneyland, says he’s managed to win their unanimous support.

“Well, they’re not fans anymore,” he laughs. It was actually my wife’s nephew that was a Brock Lesnar fan, and he was tossing up if he’d want me to win or Brock Lesnar to win, but I said if you want to go to Disneyland you better want me to win.”

But the happiest place on earth is still a long way off for Hunt and his family. First, he has to get through a man who at one time appeared unstoppable.

“He’s not even ranked in the top ten, he hasn’t fought for four years. I mean every fight is gonna be hard and I’m not underestimating Brock at all. I think he’s going to try and put me down to the ground; that’s what he’s going to try and do, but at the end of it, that’s his game plan. If he can’t do it, well then he’s going to sleep. It’s lights out for sure, homie.”