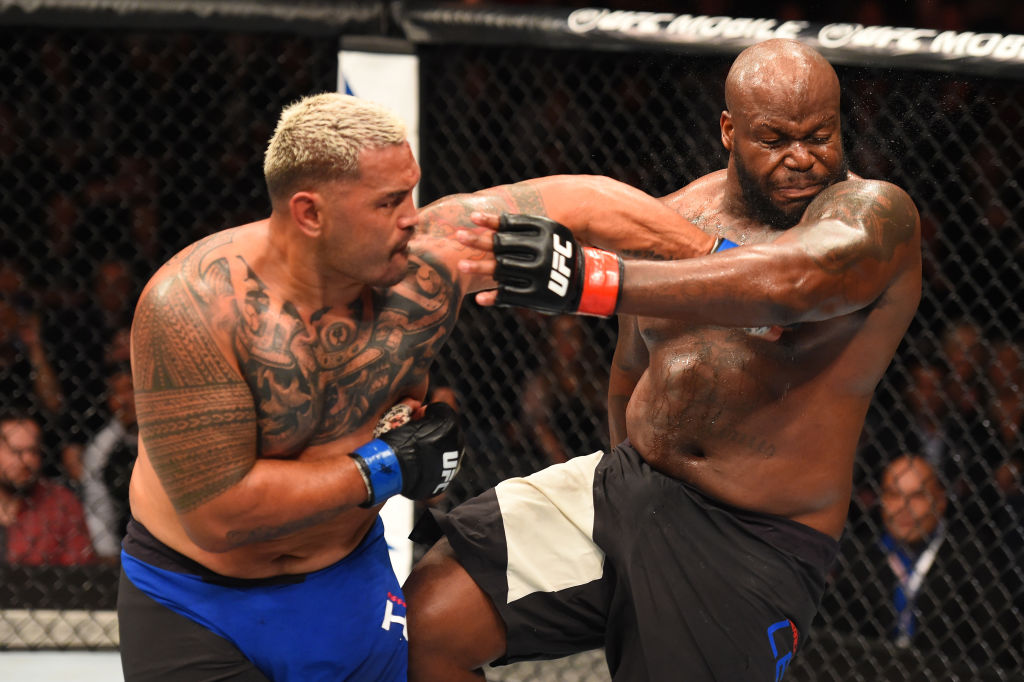 Fighting in his native New Zealand for the first time in over 15 years, 43-year-old Mark Hunt turned back the clock once more, wearing down, then finishing fellow heavyweight contender Derrick Lewis in the fourth round of their UFC Fight Night main event at Spark Arena in Auckland.

“I know Derrick Lewis is from the hood, but this is my hood,” said Hunt, who has won three of his last five bouts.

As for the 32-year-old Lewis, who saw a six-fight winning streak snapped, he shocked fans in attendance by saying, “That was probably my last fight. I’m getting married next week, and I don’t like putting my family through all this. It will most likely be my last fight in the UFC.”

With a possible five rounds ahead of them, Lewis and Hunt took a minute and a half to get acquainted with each other, then it was Hunt rushing Lewis, only to take two head kicks in return from his opponent. Hunt quickly regrouped and began stalking his foe again, but his next rush came up empty. With a little over two minutes left, Hunt tossed off a takedown attempt and landed an uppercut, but Lewis fired back with a hard right hand to the head.

Lewis continued using a kick-based attack in round two, and it was working, prompting Hunt to begin firing off his own kicks. An inadvertent eye poke by Lewis brought a brief halt to the bout two minutes in, but Hunt was cleared to continue, and with 1:25 left, a short right seemed to stagger Lewis. As the Texan backpedaled and tried to clear his head, Hunt chased him. Soon, Lewis landed a few hard shots, but Hunt walked through them, landing the last big punch of the round at the horn.

In control for the first half of round three, Lewis wasn’t able to land the finisher, but he was taking advantage of Hunt’s relative inactivity. But soon Hunt began to surge again, forcing Lewis to become fatigued and prompting Hunt to start digging to the body.

Hunt was the fresher of the two fighters entering round four, and he pressed that advantage, hurting Lewis with a right hand in the second minute. That produced a smile from Lewis, but the second right Hunt landed with 1:35 to go certainly didn’t. Moments later, Lewis, who admitted after the fight that he was hampered by a long-term back injury he suffered in 2011, covered up against the fence, and as Hunt opened up, referee Marc Goddard stepped in, halting the fight at the 3:51 mark of round four.