Hunt Big in Japan Again with KO of Nelson 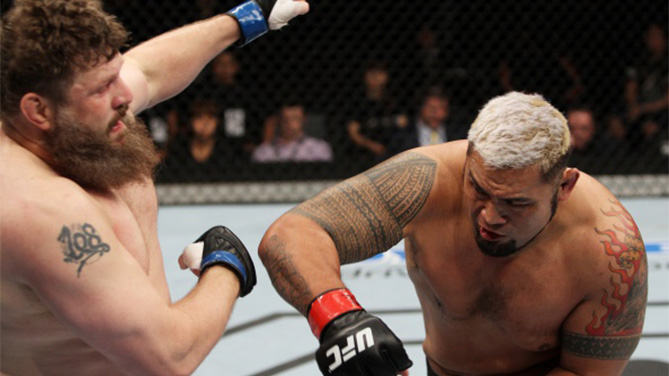 SAITAMA, September 20 – The war ended early at Saitama Super Arena Saturday night, and this one belonged to Mark Hunt. Facing off with fellow heavyweight knockout artist Roy Nelson in an eagerly-anticipated clash of top ten contenders, “The Super Samoan” struck often, eventually denting the steel chin of Nelson en route to a second-round knockout victory that reaffirmed the resurgent 40-year-old as one of the most dangerous punchers in the sport.

And he did it in the same country as some of his biggest fights in PRIDE and K-1, making the victory even sweeter.

Two of the division’s heaviest hitters circled cautiously as the bout began, but only briefly, as Hunt ripped off a close quarters combination. Nelson looked for a takedown a few seconds later but came up short. It was an inadvertent eye poke by Hunt that brought a brief halt to the action shortly thereafter, but after being cleared by the doctor, Nelson got right back after it, landing his first right hand. Hunt took it well, but Nelson was upping his pressure as the round progressed. This was apparently not an issue for “The Super Samoan,” whose own pressure consisted of thudding bombs with both hands.

The tense action continued into round two, but after Hunt landed a couple shots, his overzealousness landed him on his back, as Nelson finally got his takedown. Hunt didn’t stay there for long though, and now the exchanges were coming more frequently, Hunt holding the edge, but Nelson one haymaker away from evening the score. The finisher ultimately didn’t come from Nelson, as it was Hunt who scored with the walk off knockout, a single right uppercut that sent “Big Country” face first to the mat. The New Zealand native didn’t bother with a follow-up, and referee Leon Roberts stepped in to officially call things off at 3:00 of round two.