The Hunger Remains for Sam Stout 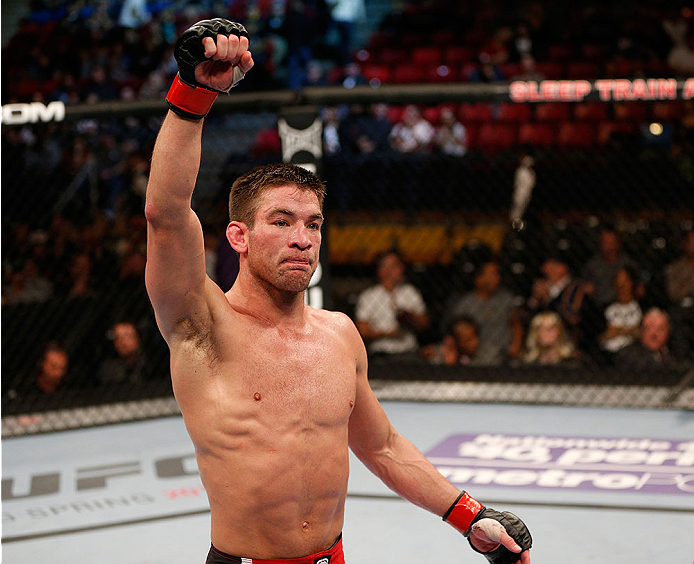 As Sam Stout enters the Octagon for the 20th time this Sunday to face Frankie Perez in a UFC Fight Night bout in Saskatoon, it’s hard to believe that he’s still just 31 years old.

It doesn’t seem possible, considering that he made his debut at UFC 58 in 2006, but it’s true.

“I was 21 when I started (in the UFC), so it’s been a long time,” he said. “It’s a strange thing, because in most people’s eyes I’m still a pretty young guy, but I’ve been doing this for a decade now, and not just in the UFC. I’ve been fighting professionally for over 12 years, so I’ve been at it a long time, and I don’t think I’m gonna be one of these guys who fights into his late 30s, that’s for sure. I think it’s more of a shelf life than it is you can do it until a certain age. I got a lot of miles on me.”

He laughs, but while Stout has had his share of wars over the years, his life outside the Octagon has been quiet enough that it’s added longevity to his career. Add in fatherhood, and the Ontario native is in a good place in his life.

As for the rest, Stout has always kept his circle small, so there’s no fevered race for Twitter followers or a desire to open the door into every aspect of his life. And he’s fine with that.

“I never really got too tied into that stuff,” he said. “I’m not really big on technology and social media. I like to train and live a relatively quiet and private life, and even more so now. I like to keep to myself and do my thing and just be around the people that are close to me. Not that I don’t appreciate the fans and all that stuff, but I like my business to be mine.”

There’s nothing wrong with that, especially when Stout has always showed all his cards, physically and emotionally, when it’s time to fight. That’s all fight fans can hope for, and win or lose, “Hands of Stone” never failed to deliver. But with losses in three of his last four fights, including knockout defeats against KJ Noons and Ross Pearson in his most recent bouts, there are questions that Stout has no problem answering.

“I went from being a guy who was known for having a great chin all those years, but that being said, these last two guys that I did get these knockouts by, I wasn’t put to sleep, I didn’t go stiff,” he said. “In a boxing match, those might have been standing eight counts. Not to mention that both the guys who did that to me were two of the best boxers in the division. KJ Noons and Ross Pearson both have some pretty devastating and accurate hands, so it’s not getting in my head too much, and I’m just gonna go out there in this fight and do my thing.”

As he pointed out earlier, Stout is well aware that no one lasts forever in this sport. But walking away can often be more difficult than any fight, especially when it’s something you’ve done practically your whole life.

“It gets to a point where it’s all you know,” he said. “It’s a hard thing to walk away from. It’s something that crosses my mind now that I’ve been doing this for so long, that you think to yourself sometimes, ‘what’s next?’ And change is a scary thing for a lot of people, especially having to start fresh at something completely new. I’ve always been a fighter. And when it comes to that point where I can’t do it anymore, the biggest thing is gonna be ‘what do I do with myself right now?’”

That will never change though, whether Stout is 31 or 61. That fighter will always be there, even if had 20 million dollars sitting in the bank waiting for him after retirement.

“You’re probably right,” he laughs. “You’d have a lot more freedom and a lot less to stress about, but you still wouldn’t know how to spend your day. You get up and you’re used to doing things a certain way, and then all of a sudden somebody tells you that you can’t do those things anymore.”

That day isn’t here for Sam Stout yet. Yes, he’s had his setbacks, but while most prizefighters with his fighting style are too stubborn to change, the London product is smart enough to know that a few tweaks here and there will keep him relevant in the UFC’s lightweight division.

“The one thing I’ve had to do is work on more head movement, work on more footwork and defensive stuff,” he said. “I can’t go in there and stick my chin out and trust that I’m never gonna get knocked out. I went in there fighting like I was invincible for a lot of years and just relying on that iron jaw that I always used to have, and if I don’t have it anymore, it just means I’ve got to change up my style. I can’t be as reckless, I have to be a little more calculated and I have to move my head more, bob and weave and slip and move. And that’s what I plan to do in this fight.”

I joke with Stout, telling him that he sure was pretty reckless at times. At the same time, that recklessness led to classics like his trilogy with Spencer Fisher, who Stout has stayed in touch with since their rubber match in 2012.

“I just did a seminar at Spencer’s gym,” he said. “We got to hang out and spend some time with his family. Him and I have stayed friends, and more so now that the trilogy’s over. We keep in touch and I like the idea of us remaining friends for the rest of our lives.”

Maybe even more than the fights, it’s the relationships Stout has cultivated over the years that really keep him in the game, whether it’s his friendships with Fisher and longtime training partner Mark Hominick, his connection with his late coach Shawn Tompkins, or his role as a mentor to younger fighters. He doesn’t deny it.

“I really like working with the younger guys at the gym and helping to show them the ropes a little bit and give them my insight on what to expect. That’s a rewarding feeling that makes me want to stay around this sport a lot longer.”

And those fights aren’t too bad either, especially when you’re still hungry.

“I’m one of those people who’s never satisfied with what I got,” Stout said. “I always want to strive to be better, I’m always looking for that next win and I’m somebody who needs to be moving forward. I don’t like to be moving backwards or standing still.”