“At the end of the day no one remembers a loser. All they want to talk about is the winner.” – Soa Palelei 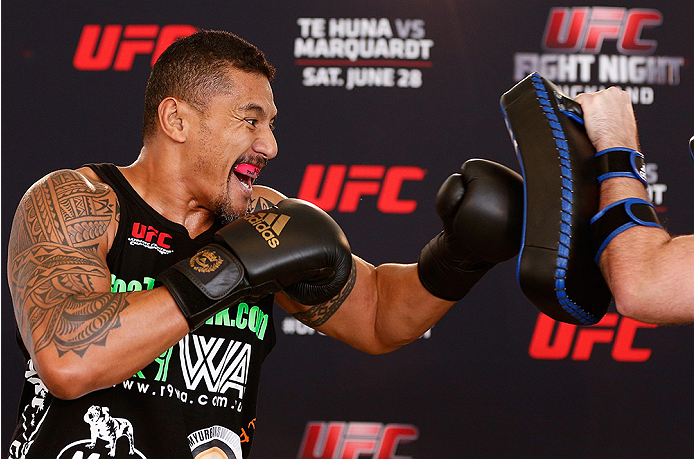 Soa “The Hulk” Palelei has his homecoming fight in Sydney, Australia, on Friday, November 7 (Nov. 8 in Sydney) as he faces fellow heavyweight Walt “The Big Ticket” Harris at UFC Fight Night: Rockhold vs Bisping in Allphones Arena.

Harris, making his return to the UFC after being cut following two consecutive losses, is a late replacement opponent for Palelei after original opponent Daniel Omielanczuk was forced to pull out after breaking a thumb in training.

And while Harris will be feeling the pressure to prove to the UFC that he belongs, Palelei isn’t counting on Octagon jitters to be a factor for his opponent.

“The thing is you can’t think that and rely on it,” Palelei says. “Things can always go a different way. I’m sure he will be hungry to be coming back after getting a second chance.  I know what that's like and when I got back in the UFC I was hungry. I wanted to prove I was meant to be in the UFC so I wasn’t going to lose, but then it can also be a lot of pressure to know this is your second chance and sometimes pressure can work against you. He’s an explosive fighter and has good stand-up. I have to make sure I get in there and stick to our game plan and get the job done. We’re both going in hungry and we are both explosive fighters. I don’t see it going past the first round but you’ll have to wait and see what happens. I just have to stick to my game plan and not focus on how he will be coming in. As long as I’m mentally ready, as well as physically, that’s all I care about.”

A mentally and physically ready “Hulk” is bad news for anyone standing opposite him in the Octagon. He has finished 11 out of his last 12 fights, most of them within the first round, but dropped his last fight via unanimous decision against tough wrestler Jared Rosholt this past June.

Soa took the lessons he learned in that loss to heart, and jumped wholeheartedly into training with UFC veteran Mike Swick at AKA Thailand.

“Soa is a beast,” Swick says. “He is always standing up to any challenge. Hill sprints are just one example. He moves fast for such a big guy and one day after doing seven, he did his final eighth one in record time, beating everyone. By beat, I mean dusted them. Guys half his size.”

“The Hulk” has equal respect for his camp.

“I was there roughly seven weeks and I can honestly say this has been the best fight camp I have ever done leading up to a fight,” he said. “We had two Iranian wrestlers flown over to be there in camp with me and these guys are no joke. One is a two-time gold medalist wrestler and the other is also a great stand-up fighter. The camp was hard and intense but it’s what we do as fighters. It kind of felt like Groundhog Day; every day you get up, change and head to training to get your face punched in, come back, eat, rest, wake up and go back for the second session, come home, eat, sleep and start all over again the next day. Having said that, we’re like a huge family over at AKA Thailand and I can’t rave enough about how good of a camp it was.”

For Swick, Soa Palelei’s confidence in his training methods is a heavyweight step in the right direction for his new gym.

“I brought AKA to Thailand,” he said. “It's the same routines and programs that we used to build stars and champions for years. All we needed was to get the raw talent in for everyone to sponge off of and now that's happening. Our fighter training right now is beastly. Soa is definitely going to turn some heads in the heavyweight division this weekend.”

And with heavyweight champion Cain Velasquez out for the foreseeable future with injury and Mark Hunt facing Fabricio Werdum for an interim title, guys like Palelei are chomping at the bit to not only turn heads, but to knock them off.

“I think it’s a tough division,” Palelei said. “We have the best of the best here being signed with the UFC. Mark Hunt is a brother to me so I’m happy for him and look forward to watching his bout. There are a lot of people wanting a chance at the belt and they should. I want a shot at the belt once the time is right. That’s what we fighters fight for, the chance to get that gold around our waist.”

Speaking of gold, Palelei thinks light heavyweight number one contender Daniel Cormier, whom Soa lost to a few years ago, has a good chance of beating pound-for-pound king Jon “Bones” Jones in January at UFC 182.

“Daniel is a beast,” he said. “He’s a great fighter and I strongly think he has a chance of beating Jones. He’s a great guy and a beast in the Octagon. I think he made the right decision changing weight because he’s been dominating his fights and I see him with the belt.”

As for Friday, “The Hulk” says don’t blink, because someone is going to sleep.

“Like Vin Diesel says in Fast And Furious, ‘A win is a win.’ Of course, to have an impressive fight and win is great, but at the end of the day, no one remembers a loser. All they want to talk about is the winner.”