"On June 23, I will have the opportunity to test myself again with a
great athlete, and show more of my abilities. There will be a great show
of skill and courage." - Hugo "Wolverine" Viana 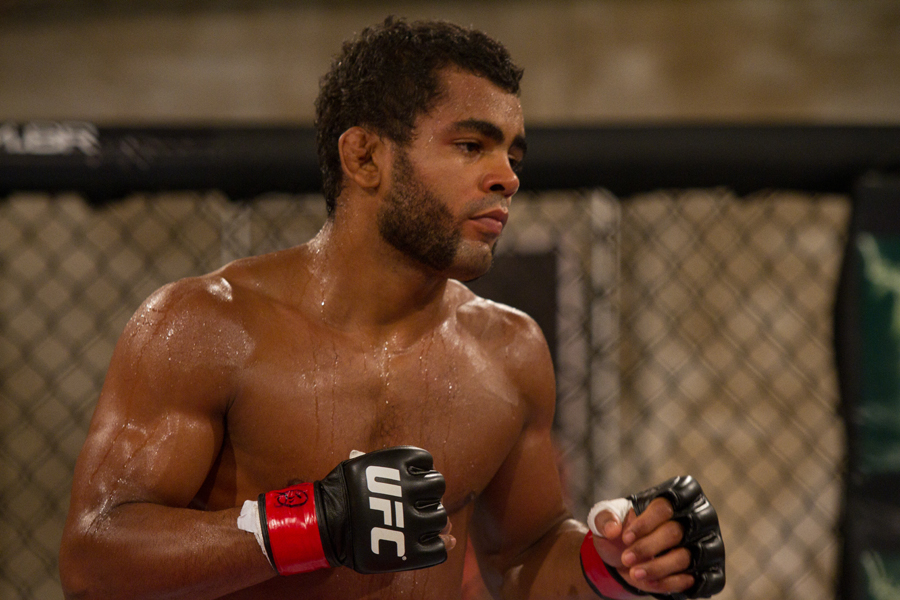 If you mention the name Hugo Viana to a sports fan in Brazil, the first vision that comes to mind may be of the Portuguese soccer player. Change it around a little bit to Hugo “Wolverine,” and the reaction will be quite different, as the instant image will rightfully be of the Ultimate Fighter Brazil competitor with the mutton chops familiar to the Marvel Comics superhero.

And to think, it was all a matter of chance and some creative shaving for the 29-year old.

“I always liked to shave more or less in the same style known of Wolverine,” said Viana through translator Julia Menezes. “So, one day during a Muay Thai event, the announcer introduced me as Hugo the “Wolverine” from Muay Thai.  I won that fight, and from then on people started greeting and calling me by Wolverine. I liked the idea, and soon after at my MMA debut my friends and coaches encouraged me to continue shaving my beard the same way for the fights.”

So far, this good luck charm has worked, well, like a charm, as Viana won all five of his pre-TUF bouts before going 2-0 on the show with wins over Alexandre Ramos and Marcos Vinicius. A loss in the semifinals to Rony “Jason” Mariano via decision halted his streak, but he will be back in action this Saturday night to fight in front of his countrymen in Brazil against castmate John Teixeira.

“It is an honor to fight in my home country, and it is an ever greater inspiration to have such an enthusiastic group of fans,” said Viana, a native of Sao Paulo who now fights out of Salvador, Bahia. “However, I am also looking forward to fighting in other countries and hope to get the same vibe from other people.”

It’s a success story shared by many of the fighters on the first Brazilian edition of the popular reality series, but unlike some of his peers, Viana didn’t need fighting to survive or take him out of a bad situation. Sure, he was a martial artist since the age of 12, competing first in Taekwondo, but he also has a degree in Physical Therapy, a way out of a different sort. So it’s not surprising that there were a few raised eyebrows from family members when he told them he was going to pursue a pro fighting career.

“In the beginning, it was a bit difficult because some people doubted I had talent for martial arts,” said Viana, who counts Royce and Rickson Gracie, as well as Anderson Silva and Minotauro Nogueira as the fighters who have influenced him the most. “In fact, they did not think I could even survive a fight. Most people thought it was a waste of my talents as a therapist, and some told me I should devote my time to studying.”

Viana followed his heart though, turning pro in 2010 with a decision win over Marcelo Santos. Four more wins led up to his appearance on TUF, where he quickly became one of the most popular members of the cast.

“I definitely could feel the love from my fans, friends and family,” he said. “My Facebook page (www.facebook.com/hugo.viana.wolverine) is full of congratulatory messages and I continue to receive words of encouragement in all media networks. I feel grateful, and encouraged to become an even better man.”

He’s certainly become a better fighter, a fringe benefit for all competitors who were sequestered from the outside world during the weeks of taping. “The experience in the house made me a better professional fighter,” he said. “TUF is an incredible opportunity that allows one to grow as a fighter.”

A member of Vitor Belfort’s team, Viana also had the opportunity to work with the man who still trains him today, Luiz Dorea, the coach of UFC heavyweight champion Junior dos Santos.

“Training with such a great coach is an honor for me,” he said of Dorea. “His broad knowledge and experience always keep me prepared during my struggles and the pressure time during the fights.”

There will be pressure this weekend, of that there is no doubt. But at the same time, those who emerge from TUF do have an advantage over most debutants that haven’t had to go through what they did to get to this point. For Viana, being away from home was tough, but the reward made it worth it.

“I missed my family and friends a lot during the program,” he said. “The more time passed, the harder it got, but the goal and the dream of being among the best gave me strength to continue on the journey.”

On Saturday, “Wolverine” begins his UFC journey, one he expects will last for only one fight at 145 pounds before he drops to bantamweight, but in the meantime, he plans on making an impression on everyone watching.

“I believe I changed a lot as a fighter,” he said. “Today I have more confidence, and I know my potential. I had never fought on any main card before and I had never fought with leading-edge fighters such as those I faced at TUF. Thus, with such experience, I can discover more about martial arts in the Octagon. On June 23, I will have the opportunity to test myself again with a great athlete, and show more of my abilities. There will be a great show of skill and courage.”