Hughes Letting the Fight Speak For Itself

“I’m working hard because I definitely want to own the middle of the second round all the way to the end of the fight.” - Matt Hughes 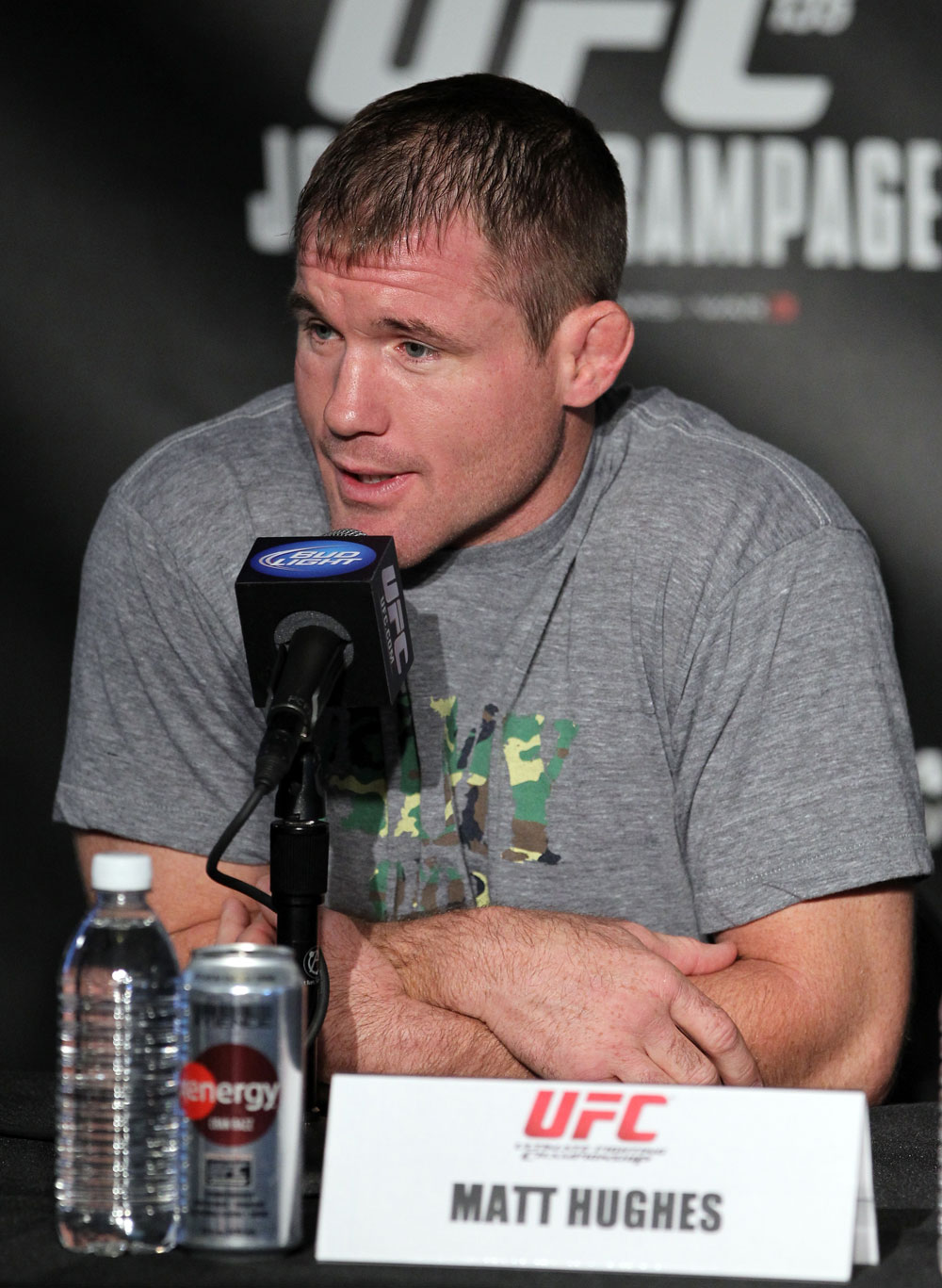 Matt Hughes wasn’t going out like that. Not after two reigns as the UFC welterweight champion, not after beating a Who’s Who of 170-pound stars over the course of a career that landed him in the Hall of Fame even before he retired. No, the first round knockout loss to BJ Penn in November of 2010 wasn’t going to be his fighting epitaph.

So how does a 37-year old prizefighter find the desire to drag himself away from his family again for a grueling training camp to prepare for a younger fighter who would like nothing more than to hang his proverbial scalp on his wall of victims?

He doesn’t. At least not for eight weeks or more. Instead, Hughes split up his four weeks working in Salt Lake City, Utah with Jeremy Horn with a stay at home in Hillsboro, Illinois where he not only got his work in, but he got his family time, and some help from friends old, current, and unlikely.

Horn, Matt Pena, Robbie Lawler, and DaMarques Johnson have all been mainstays for Team Hughes, and the bond between them is evident. Especially important is Horn, who is not only one of the premier fighters of his era, but also one of the best strategists in the game. If you haven’t heard Horn call a bout for one of his fighters from Octagonside, you’re missing a Master Class in technique and strategy.

“He brings a lot of intelligence, but not only is he smart, but he breaks things down in a way that makes it easy to understand, and it’s the way that he passes information along that makes him so important to the team,” said Hughes of Horn. “And I’ve been in the position where he’s been on the outside of the cage and I’ve been on the inside and he’s walked me through steps and I’ve won fights because of his coaching through the fence.”

That’s the current friends department. For old friends, Hughes went back to his high school gym in Hillsboro and reunited with the man who set the standard for coaching back in the early Zuffa era – Pat Miletich. What trainers like Greg Jackson and Firas Zahabi are to the modern game, Miletich – a former UFC champion – was for a team that included Hughes, Horn, Lawler, Jens Pulver, Tim Sylvia, Tony Fryklund, and so many more UFC standouts.

“It had been years since Pat and I had worked together, probably since I left the gym, which was right after The Ultimate Fighter 6 in 2007,” said Hughes. “After that, me, Matt (Pena), Robbie (Lawler), and Marc Fiore – the coaches for my team – all came up with the gym concept. So it’s been that long. But Pat and I have always stayed in contact and he’s a brother of mine, there’s no doubt about that. So it was great to get my hands on him and wrestle with him, and the thing that wasn’t so great were his quick jabs and his standup. He’s got ferocious standup.”

“He’s still got it, but he’s got it in certain time slots,” laughed Hughes. “He would not go three five minute rounds, but he can have a decent five minute go, take a few minutes off, then go again later. It was great getting back in there with him. I still knew what his strengths and his weaknesses were and where he didn’t like to be and what made him uncomfortable and I’m sure he knew what made me uncomfortable, but I was the guy who was in shape, so things kinda went my way a bit.”

That could have been enough right there in terms of having quality preparation for an important fight, but Hughes upped the ante when a new friend and old rival, Penn, returned the favor for Hughes helping him out for his training camp against Jon Fitch in early 2011. Yes, three fights later, Penn and Hughes had become training partners.

“A lot of people really raise an eyebrow when I say that BJ’s been training with me, but they might not know that I went out to Hawaii and helped BJ with his takedowns for Fitch,” said Hughes. “I found out a lot about BJ when I went out to Hawaii and started training with him. We are actually a lot alike personality wise, and sense of humor wise for sure. We have a ball together and I’ve got to watch out for him because he’s quick-witted. My brother (Mark) is very quick-witted as well, so I’ve just gotta stay on my toes. He’ll catch me a couple times, because I’m a little naïve. (Laughs) But we really have a lot of fun together and we’ve found out a lot about each other since the third fight.”

With such an all-star lineup, you would think that nothing could go wrong for Hughes as he prepared for his 55th professional fight at UFC 135 on September 24th. And in the gym, nothing did. But on September 5th, UFC President Dana White tweeted “Diego Sanchez broke his hand. Looking for a replacement for Hughes.”

As the news broke on Monday night, Hughes was stepping on a plane to go to Utah to continue his camp after his stay in Hillsboro. Told by White that the UFC was looking at replacing Sanchez with either Josh Koscheck or Jon Fitch, Hughes agreed to either foe. By Tuesday afternoon, he had an opponent. It was Koscheck.

“I’ve never picked an opponent and I’ve never turned one down,” he said. “So whoever the UFC wants to put in front of me is what happens and whatever they think is a smart matchup, I trust them. Overall, Josh is a lot different than Diego, but in a few things he’s a lot like him. Of course for two months now, I’ve been training for a southpaw and Josh is a conventional fighter. I’ve also been training for someone who didn’t have the wrestling credentials I did and now I’m facing somebody who’s got better wrestling credentials than I had. But I do have to say I like it that it’s two and a half weeks out and he’s now taking the fight, where I’ve been training for three months when it comes fight time.”

That confidence that he will be the better prepared of the two, coupled with his usual belief in himself, makes Hughes a tough man to beat. But in Koscheck, he will not only be facing an opponent with legitimate knockout power in his right hand, but one of the few whose wrestling credentials surpass those of the former Eastern Illinois standout. And those are two attributes Sanchez wasn’t packing with him for Denver.

“I don’t know that I’ve ever faced anybody with credentials as good as he’s had,” admitted Hughes. “I’ve faced people who’ve said they were better than me in wrestling, but it didn’t work out that way in the Octagon. So I’m just gonna go in there with the same mindset, that I’m gonna do whatever I want to do, and we’ll see how the gameplan turns out.”

And if beating a younger contender who has stellar wrestling and a knockout punch isn’t enough to get Hughes primed and ready for battle, Koscheck has opened up the verbal floodgates with talk that the welterweight great ducked fights in the past with Koscheck and his American Kickboxing Academy teammates Fitch and Mike Swick.

“I just think he’s trying to build the fight, to be honest,” said Hughes. “He did the same thing with GSP (Georges St-Pierre) on the reality show, which didn’t turn out too well for him in the actual fight (at UFC 124). I don’t pay attention to what he’s saying, I don’t really know what he’s saying, and I don’t care to know what he’s saying. He is who he is and that’s who I’ve gotta fight.”

Are those the words of a 37-year old who has seen it all over the course of a 13-plus year career and has gotten jaded, or is it just Hughes looking at such antics as wasted energy when you need all you can get on fight night?

“I can usually turn people off and ignore them, and I would imagine I’ll do the same thing with him,” he said. “I’ve had some real silly guys try to get under my skin in the past, and I’d say he (Koscheck) is not top of the list of being the biggest jackass out there that I’ve faced. (Laughs) I do find some of it amusing though.”

And hey, when you take away all the talk, you still have to fight. That’s Matt Hughes’ forte and what he is planning on doing once again this Saturday night.

“I’m working hard because I definitely want to own the middle of the second round all the way to the end of the fight,” he said. “I want to make sure that’s my time, no doubt about it. I know Koscheck, as a wrestler, is gonna have some heart and he’s always gonna have that will to finish strong, so it is motivating me to get in shape and be a hundred percent ready. I’m gonna be pushing the pace and definitely putting the striking on, looking for Koscheck’s tendencies, and I think I get my hand raised at the end, I really do.”