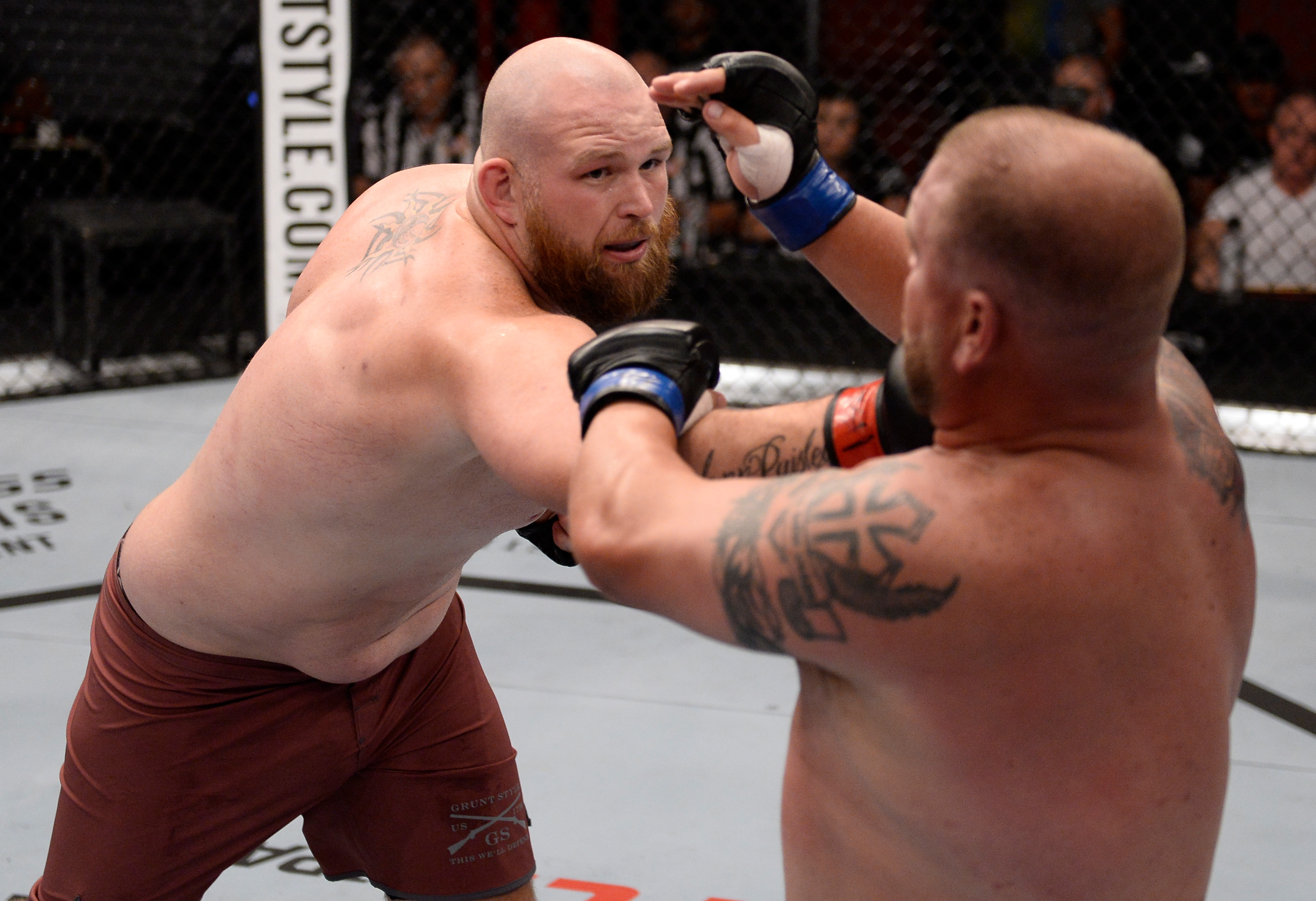 The members of Ohio’s Strong Style team were certainly happy for Jeff Hughes when he defeated Josh Appelt and earned himself a UFC contract last month. But once those initial good wishes were given, it was back to business.

“It was pretty much get back to work,” Hughes laughs. “It’s about as blue-collar as it gets.”

That’s just fine with the 30-year-old heavyweight, who was ready to work as soon as he got home from Las Vegas, especially now that it’s his only job.

“This is my first week being a full-time fighter,” said the former truck driver, who gave his two weeks’ notice after getting his UFC deal. “I’ve been waiting a long time to say that. Now I’m very close with my boss, but that was the longest two weeks of my life. When it was finally over, I’ve had a smile on my face since then.”

For those who don’t realize the commitment it takes to be a pro fighter, add in a day job, and it’s an almost immeasurable sacrifice that removes any chance of having a “normal” life. So Hughes walking around with an eternal smile is understandable.

“Now I can focus on fighting, and that’s been the goal forever,” he said. “I had a very physical job. I would throw shingles for eight to ten hours a day, and now I don’t have to worry about doing that, so it’s been great mentally and physically.”

You might think Hughes is exaggerating when he says this has been the goal “forever,” but it may have felt like that when you consider that the Canton native has been chasing this for 13 years. And for a lot of those early years, the hill was even steeper when he was going after a goal many doubted was realistic.

“I have a handful of friends and family that have been with me since the first day I walked into a gym at 17,” Hughes said. “But even a lot of people in my hometown thought it was a fad or something, that I wasn’t gonna make it. Now, they’re all coming back and they’re super supportive and they’re blown away that I’ve gotten as far as I have so far.”

To get his UFC contract, Hughes needed less than a round to stop Appelt, moving his pro record to 10-1. But before that, he made noise with wins over veteran Richard Odoms and TUF 28 competitor Maurice Greene, with both of those LFA title fights going five rounds. That’s something to have in the back pocket that not too many heavyweight prospects can claim, and Hughes knows it.

The confidence of “Lights Out” is evident, but it’s not a “Look at me” confidence. It’s a quiet knowledge that when it’s time to fight, he will be ready to go. It’s a blue-collar thing where you act like you’ve been there before.

“My kickboxing coach says I’m almost too calm,” Hughes laughs. “He’s caught me yawning right before we walk out, and I don’t know, I just get into a zone. It’s a fight and this is what we get paid to do, so it doesn’t really bother me and I don’t get real nervous about it.”

That won’t change when he’s got those three letters – UFC – on his gloves, either.

“Of course, I think everybody looks at the rankings to see where everybody’s at and who a potential matchup would be,” Hughes said. “But it’s really up to UFC and them getting a hold of my manager and coaches. Because with me, they can throw anybody’s name at me and I’ll say yeah.”