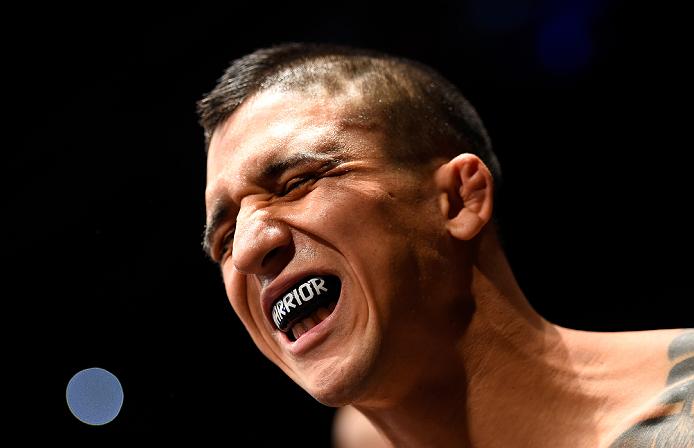 After five fights in 2016, a stretch that included a call to the UFC in September and a trip to Brazil to face bantamweight contender Thomas Almeida in November, Albert Morales earned a little time off.

He got it. Now he’s back and ready to roll again.

“Anything longer than three months, I start getting restless, and I don’t like it,” laughs the 135-pound prospect, who faces newcomer Andre Soukhamthath this Saturday in the UFC 209 opener at T-Mobile Arena in Las Vegas.

Yet despite his eagerness to throw hands in the Octagon once more, the 25-year-old realizes that not only was the break a good thing, but it was necessary for him to evaluate where he’s at in the sport while remembering that now, this is more than just fighting to fight.

“After that last fight I realized that I am pretty young in this sport and at this point it is my career,” he said. “I made it to the big show. So I really started thinking that this is my career, this is my life and it’s not a rush anymore. It was a rush to get here, so from now on I want to be smart about it. I want to make the smart decisions, take my time and fight.”

“The loss, it was huge. I don’t think I would have made the jumps that I’ve made this camp if it wasn’t for that loss." --Albert Morales on last loss to Thomas Almeida

To reach this point, there was no slowing down. Turning pro in January 2015, Morales fought anyone at anytime and quickly built a reputation as a fighter to watch, and after compiling a 6-0 record on the local scene, he signed with the UFC and fought to a draw with Alejandro Perez last September. Two months later, he was in Sao Paulo fighting hometown hero Thomas Almeida, a fighter who dwarfed him in experience. A huge underdog, Morales was stopped in two rounds, but he made an impression.

“I appreciate the fans of Brazil because they showed me something new,” he said. “They hated me, but at the end of the fight, we had both fought and gave it our all and I went out on my shield and it was beautiful, as weird as it sounds, because they were cheering. They gave me high fives on the way out and appreciated the fact that I went out there and fought and gave them a show. That was huge for me.”

But Reseda, California’s Morales wasn’t taking any moral victories. He knew there was work to be done, and he did it.

“The loss, it was huge,” he said. “I don’t think I would have made the jumps that I’ve made this camp if it wasn’t for that loss. If I let the loss to Thomas Almeida make me pissed off and my attitude gets messed up, then I’ve really lost. I’m not gonna come back the same and I’m not gonna do anything. So I had to beat the fact that I lost, and the only way to do that was to go back into the fire and just learn and get better.”

On Saturday, 2017 begins for Albert Morales. It remains to be seen if it will be as life-changing as last year was, and even if it is, 2016 will always hold a special place in his heart, even if he can’t really put it into words.

“No, there’s really no way to describe it,” he laughs. “The way I see it, it’s almost like a fairy tale or a dream. It doesn’t seem realistic. But dreams come true if you make ‘em. Sometimes when the dreams are coming true, you don’t realize that they’re happening and I didn’t really think about that until about a month ago. It’s kind of surreal, but I love it, and at the end of the day I know I’m gonna have a nice story to tell.”