With only one pro fight to his name, Bo Nickal is officially turning wrestling fans into MMA diehards.

Josiah Hritsko has literally made a life out of covering NCAA wrestling. Regardless of how similar the two sports are, Hritsko’s MMA knowledge never strays too far out of the top five in most divisions, something in which he’s very upfront.

He can tell you how every wrestler at Campbell University stacks up on his podcast and YouTube channel, but couldn’t have told you what UFC FIGHT PASS was until Bo Nickal announced his MMA debut was set to take place at iKon FC 3.

After witnessing a Nickal victory, a Jimmy Lawson KO and the common speculation that the current face of Penn State Wrestling - Roman Bravo-Young - will venture into the Octagon one day, Hritsko has gone from “I’ll watch the main event of the PPV” to penciling in DWCS on Tuesday nights.

“Whenever I first subscribed to FIGHT PASS, I was doing it to support Bo Nickal, but now I’m seeing all these other fights and it makes me excited about the sport,” Hritsko said. “It allows me to invest some fandom into MMA because I’ve always been interested, but Bo was really that guy that made me want to watch and become a fan.” 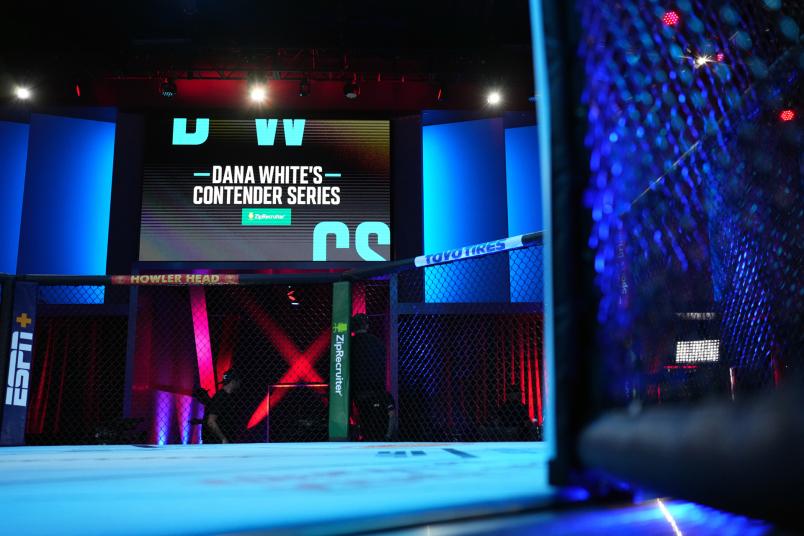 A general view of the Octagon prior to the first fight during Dana White's Contender Series Season 6 Week 1 at UFC APEX on July 26, 2022 in Las Vegas, Nevada. (Photo by Chris Unger/Zuffa LLC)

Bo has certainly kicked the door in for a lot of wrestling fans, but with ATT opening a gym next door to the reigning NCAA champions and Lawson and RBYs ties to the sport, there may be a dramatic addition to the UFC fanbase on the way. Some of the most popular members of the most dominant program in the past decade tying themselves to MMA can’t be anything but good for both sports.

“This shows that Penn State produces talent,” Hritsko said. “The dynasty that Penn State has become is being pulled back from the generation that Cael started in. You’re really starting to see the effects of Cael Sanderson’s coaching going out into other avenues than wrestling.”

National championship podiums, Olympic podiums and now the cage. There’s no telling where Penn State graduates may end up, but it usually tends to be the top of the pack. With DC, Randy Couture, and Nick Piccininni on the come up, Oklahoma State will always be known as Champ-Champ U to fight fans, but is Penn State the school to go to if you’re planning an MMA career after dominating the mat?

RELATED: Nickal Won't Shy Away From Wrestling | Nickal Putting Wrestling Back On The Map | Nickal Is Ready For The DWCS Environment | Nickal Is Motivated By Success

“What people don’t understand is that what we have coming is truly a different kind of athlete,” Nickal said. “Myself, all these young guys coming up, we’re different kinds of athletes that are coming out of these schools. Obviously, there’s been a lot of wrestlers who have been successful, a lot of Russian wrestlers, this and that, but when you have collegiate NCAA folkstyle all-Americans, multiple time national champions that are going to be coming into the sport of MMA, that’s just truly a different athlete from a training perspective, a psychology perspective, from an experience perspective. I think we’ve had a lot of guys with success, Jimmy, Phil Davis, myself, but I think moving forward we’re really going to start a new era and take over the sport. I think in five or ten years, half the champions on the UFC roster could be coming from Penn State and out of our gym.”