How it happened: Re-live the London workouts

Didn't get a chance to join us live for the UFC Fight Night Silva vs. Bisping Open Workouts at the flagship JD Sports store in London? Re-live the entire experience with our social media rewind and see the best from the social media world - Tweets, Periscopes, pictures - we've got it all here.

Watch how it went down:

Anderson Silva live at the open workouts in London!
Posted by UFC on Wednesday, February 24, 2016

Michael Bisping live at the open workouts ahead of UFC London!
Posted by UFC on Wednesday, February 24, 2016 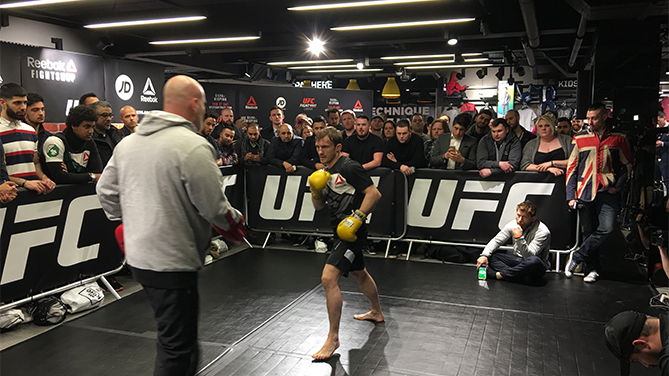 #UFC has taken over! Check out #UFCLondon art all over the city before the event this Saturday on #UFCFIGHTPASS pic.twitter.com/buGvROobGv
— UFC Fight Pass (@UFCFightPass) February 24, 2016

"I don't think anyone on this planet can beat me, Saturday night." @bisping #UFCLondon
— Mike Jackson, Esq. (@TheTruthJackson) February 24, 2016

London is like my home @SpiderAnderson tells the fans at his open workout https://t.co/Khe48Koj2K
— Nancy Gay (@nancygay) February 24, 2016

Anderson Silva showing off some of his skills. #UFCLondon is going to be one hell of a night! #fightnight pic.twitter.com/rQy1J5OIvk
— Reebok UK (@ReebokUK) February 24, 2016