'Hot sauce' living the dream as he preps for UFC 195 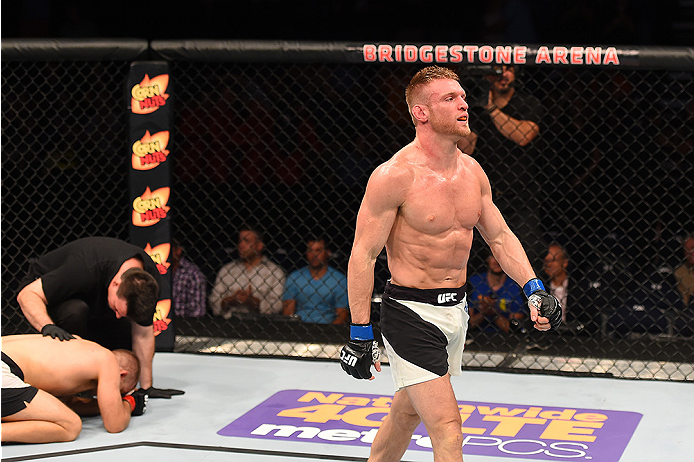 Like a lot of kids, current UFC lightweight Scott Holtzman wanted to be a professional athlete when he was growing up. Sports were his obsession. While others were into comic books and video games, his world was consumed by athletics and competition.

Childhood dreams became adolescent possibilities and young adult opportunities, with Holtzman excelling with a stick in his hand. After playing hockey at the University of Tennessee, he had a two-game cup of coffee with the Knoxville Ice Bears of the Southern Professional Hockey League but couldn’t stick and, like so many others, he was forced to put those childhood dreams aside and enter “the real world.”

Up next for Holtzman: Drew Dober at UFC 195

He tried to do the 9 to 5 thing – shirt, tie, cubicle, TPS reports – but the monotony of completing the same 40-hour work weeks every seven days started to get to him. He needed a release; a passion he could channel his energies into.

A friend introduced him to jiu-jitsu, his competitive nature kicked in, and after failing to achieve his dream on the ice, he found his avenue to being a professional athlete inside the cage.

“Society says that you get out of college, get a job, buy a house, get married, have some kids and that’s it,” Holtzman begins, tracing his journey from UT to the rink to the cubicle to the cage. “For me, I got out of college, I tried to play a little bit of pro hockey, but I didn’t make it, so what’s next? Well, you get a job and you work like everybody else, 9 to 5, 40 hours a week. I started doing that and it drove me crazy, so I needed another outlet.

“I found some jiu-jitsu and eventually my competitive side took over. I tried out a fight, won and it was really quick and, honestly, here I am today.”

He is living and chasing his childhood dream at the same time, working every day to get better while officially being able to identify himself as a professional athlete. Holtzman is 8-0 in the deepest division in the sport and is on the brink of his sophomore appearance in the UFC Octagon and a matchup with Drew Dober at UFC 195.

Racing out to a 7-0 record in 26 months, the 32-year-old inked a contract with the UFC in August 2014, but was forced to wait the better part of a year before making his debut, as injuries and the never-ending list of lightweights looking for a fight kept him from stepping into the cage. It all worked out for the best, however, as Holtzman ended up making his debut close to home, picking up a third-round stoppage win over Anthony Christodoulou last summer in Nashville.

Now he gets to cross another location off his list of places where he’d like to fight when he steps into the cage with Dober inside the MGM Grand Garden Arena on Jan. 2.

“It’s definitely a bucket list thing,” he says of fighting in Las Vegas. “If you think about how lucky I’ve been – my first fight was near my hometown and now my second fight is in Vegas.

“If you’ve ever been underneath the MGM in the locker rooms, they’ve got pictures on the wall of everybody that’s performed there, all the fighters that fought there, so it’s a special place. It’s definitely a special thing and hopefully afterwards I’ll be looking back on a win and will be able to soak it in a little more.”

Holtzman knows he’s in a rare position – that few people get a second chance to chase their dreams of being a professional athlete - and he uses the disappointment and frustration of having failed on his first attempt to push him on a daily basis as he tries to make the most of his second chance.

That, and the fact that he doesn’t want to get beat up in front of millions of people on television.

“A lot of guys don’t get another opportunity at a professional sport so, for me, I still carry that chip on my shoulder and I’m trying to make the best of this opportunity,” Holtzman, who took this fight as a short notice replacement for Erik Koch, admits. “Did I put in the work? Did I do everything that I could to give myself a chance to be successful? When I really step back and look at it, the answer is ‘No,’ so that drives me still.

“And it’s easy to get out of bed when you know a guy is going to try to kill you on national television with millions of people watching,” he adds with a laugh. “Plus they have those super slo-mo cameras that show every time you get punched too, so I’m trying to bring the best version of myself possible in there.”

Through his first eight professional fights and initial UFC appearance, things have gone pretty well for the man they call “Hot Sauce,” whose fight with Dober will kick off the televised portion of Saturday’s preliminary card on FOX Sports 1, but he refuses to let off the gas and simply be satisfied with what he’s already achieved.

He has bigger dreams now, and the MMA Lab product sees his encore in the Octagon as a chance to move one step closer to making those dreams a reality.

And maybe to pick up a Fight of the Night bonus too, although Holtzman admits he and Dober will have some stiff competition.

“Ultimately, I’m here to win; I want to compete at the highest level with the best guys in the world. To get up to that Top 15, Top 10 is definitely a goal, but it’s one fight at a time for now. I want to beat Drew and cut the line and I think doing that will put me in a good spot.”