Horiguchi next big thing out of South Florida 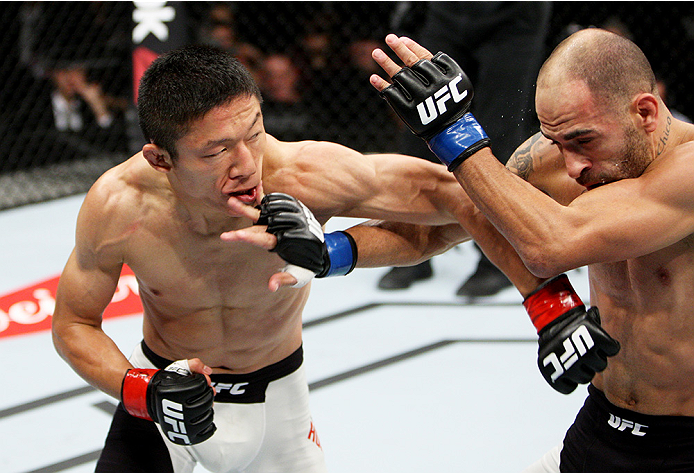 Something magical is happening in South Florida.

In the United States, MMA’s main staging grounds have been and still are along California’s golden coastline, on the streets of Las Vegas, and tucked away in the red desert of Albuquerque, New Mexico. But there has been a developing trend that has some of the best and brightest in the sport heading to the east coast. Specifically, the Sunshine State.

It’s not Walt Disney and Mickey Mouse alluring these top talents. It’s a different, but no less remarkable, tandem of Dan Lambert and Ricardo Liborio who are attracting UFC fighters from all weight classes to their world-renowned American Top Team.

The gym in Coconut Creek boasts the current UFC welterweight champion “Ruthless” Robbie Lawler as its most prized pupil, and they offer a staggering litany of coaches like former Olympic wrestlers Kami Barzini and Steve Mocco to striking coaches like Vitelmo “Katel” Kubis and Kelson Pinto.

It’s really no surprise American Top Team has been able to continue adding to their impressive roster of fighters with big names from all divisions. At the top of the scale, there is former UFC heavyweight champion Junior Dos Santos. And as of this January, on the other end of the poundage spectrum is the No. 5-ranked UFC flyweight Kyoji Horiguchi.

At 25 years old, the electric, stand-up sensation from Gunma, Japan is one of the latest looking for that something extra in the hallowed halls that Lambert and Liborio built. It was around this time last year at UFC 186 that Horiguchi faced and lost to the seemingly unstoppable UFC flyweight champion Demetrious Johnson.

“It was my great experience to face the champion, which gave me a time to review my training,” Horiguchi said. The defeat was Horiguchi’s first inside the Octagon and only his second across his 18-fight pro career.

Prior to joining American Top Team, Horiguchi did get back on the winning track, taking a unanimous decision win over Chico Camus at UFC Fight Night: Barnett vs. Nelson. The victory improved the former Shooto bantamweight champion’s pro record to 16-2 and his Octagon record to 5-1.

“I just looked for the win,” Horiguchi said. “I wish I was able to finish the fight, especially coming from the loss, but Camus was tough. I was happy to win the fight in front of my supporters and fans in Japan.”

In September, with the Saitama crowd cheering for him, Horiguchi did what he does best, which is land early and often on the feet at distance. The product of Norifumi Yamamoto’s KRAZY BEE gym buzzed around and stung Camus for 15 minutes to earn 30-27s on all three judges’ scorecards. Horiguchi should not be too hard on himself for not getting the knockout, as Camus has only been finished with strikes once in his 23-fight pro career and that was over seven years ago.

Up next, Horiguchi will put his new training to the test in Rotterdam, as he takes on Neil Seery. The flyweight from Dublin, Ireland is coming off his best UFC showing yet as he secured a second-round guillotine choke of Jon Delos Reyes at UFC Fight Night: Holohan vs. Smolka. In front of his hometown, Seery improved his pro record to 16-11, got his first UFC finish and earned a Performance of the Night bonus.

“He’s a good aggressive fighter,” Horiguchi said. “He comes forward to give his opponent pressure. I think it’s a good matchup with my style and we will be able to show an exciting fight. This is an important fight for my career and a good chance for me to show my aggressiveness to European fans.”

This Sunday at UFC Fight Night: Overeem vs. Arlovski, two frenetic flyweights will collide as Horiguchi battles Seery. As American Top Team has helped established fighters like Lawler and Dos Santos return to prominence, it should be very interesting to see what success is in store for Horiguchi.