In his first bout since losing a title fight to Demetrious Johnson in April, Japanese flyweight contender Kyoji Horiguchi made an impressive return to the win column Saturday at Saitama Super Arena, shutting out Chico Camus over three rounds.

Not surprisingly, the pace was fast and furious between the two flyweights in the opening round. Horiguchi shot in-and-out with punches and kicks while showing off a bit of flash. Camus put on his hard hat and went to work, landing with several right hands throughout the frame.

Horiguchi was able to cut and rock Camus early in round two but the Milwaukee product got his legs back under him fairly quickly. The former world title challenger continued to keep the pressure on and he appeared to be sitting down more on his punches as the round progressed, allowing him to add to his lead.

Camus’ spirit was willing in the final round but Horiguchi was always just one or two steps ahead, allowing the No. 7-ranked contender to get back in the win column. 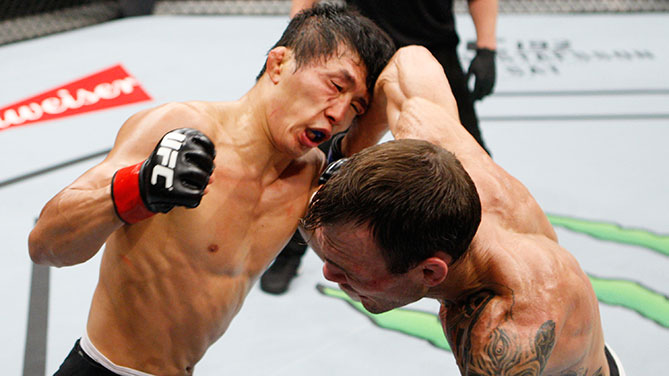 The bantamweight bout between Takeya Mizugaki and George Roop started out in promising fashion. And though the action waned as the rounds went by, the Japanese veteran didn’t complain with the end result, as he won a three-round unanimous decision.

The bantamweight veterans put on a striking show in the opening round, with Mizugaki landing flush shots at the beginning and end of the frame, and Roop doing solid work at close range against the fence in between.

Mizugaki scored with a hard right-left to open up round two but Roop immediately tied his opponent up to get his bearings back. As the pace slowed in the second frame, Roop was scoring with kicks to the Kanagawa native’s lead leg, but Mizugaki found a home for his power shots upstairs, keeping his foe from gaining any momentum as he added to his lead.

The third turned into a war of attrition against the fence. Both fighters having their moments of success, but neither coming close to finishing the bout. 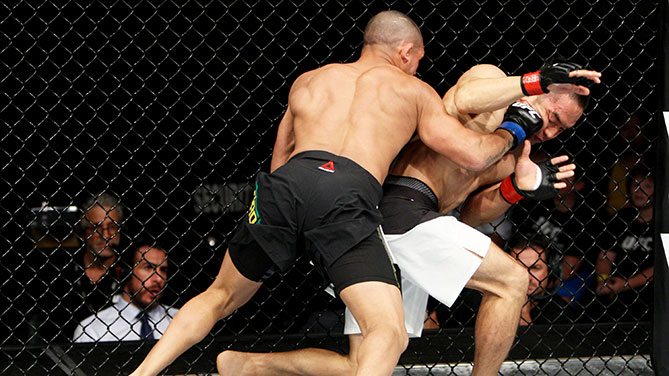 Former Ultimate Fighter winner Diego Brandao continued to work his way back up the featherweight ladder as he picked up his second consecutive knockout win, this one coming in less than 30 seconds over Japan’s Katsunori Kikuno.

Brandao’s right hand hit paydirt less than 15 seconds in, sending Kikuno to the canvas, and the Japanese fighter never fully recovered. Brandao went on the attack as soon as his foe went down and while Kikuno tried to buy himself some time to lock the Brazilian up, Brandao threw him down and into the fence. A few more right hands brought in referee Steve Perceval to halt the bout 28 seconds in. 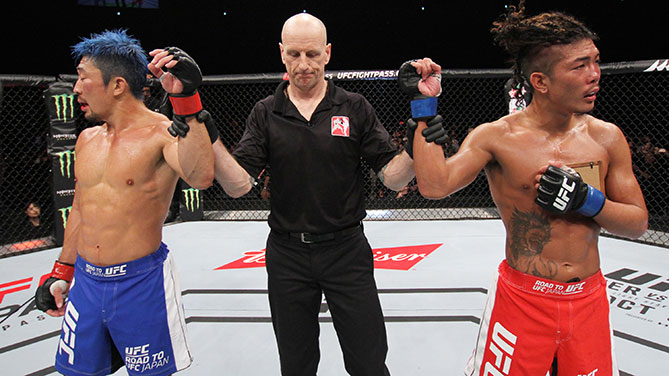 The Road to the UFC Japan featherweight final was an exciting one. But there would be no winner, as the bout between Osaka’s Teruto Ishihara and Tokyo’s Mizuto Hirota was ruled a draw after three rounds.

Scores were 29-28 Ishihara, 29-28 Hirota and 29-29. It was announced that UFC President Dana White awarded contracts to both fighters.

Younger, faster and more explosive than his opponent, the 24-year-old Ishihara (8-2-2) had a dominant first round with his left hand scoring a late knockdown and rarely missing the mark before that. For his part, the 34-year-old Hirota appeared to take everything without flinching, with the knockdown being more of a balance shot than a fight-ender.

Ishihara scored another knockdown early in round two, Hirota (18-7-2) bouncing right back up but falling into a deeper hole on the scorecards. By the midway point of the round Hirota began finding his range as he kept pressuring the brash youngster and with under two minutes left he scored his first takedown of the bout. The two rose quickly but Hirota had some more stand-up success as the frame ended.

Ishihara’s third knockdown came 15 seconds into the final round, with the left hand doing the damage once more. Hirota rose quickly once more and went on the attack, with Ishihara’s porous defense leaving plenty of openings for him. As the bout strayed to the mat Hirota landed a series of ground strikes, but Ishihara scrambled back to the relative safety of the stand-up game, at least until Hirota pinned him to the fence and let loose with punches until the fight’s end.