Watch all these fights exclusively on UFC FIGHT PASS

Jack Marshman, the first Welsh fighter signed to the UFC, made his nation proud in UFC Fight Night prelim action at The SSE Arena on Saturday, scoring an exciting second round TKO victory over Magnus Cedenblad.

After doing his best to find his way inside in the opening minute of the bout, Marshman found that way with a left hook that dropped Cedenblad. The Swede recovered immediately with a takedown, and he proceeded to work his ground-and-pound game, cutting his foe over the left eye. Marshman stayed active from his back, but he was unable to get upright before the end of the round.

With the crowd firmly in his corner, the bloodied Marshman kept pressing forward on his taller foe, and whenever he got within range, he was able to land and rattle Cedenblad. Soon, the Stockholm product was bloodied as well, forcing him to look for a takedown. Marshmann got loose though, and after putting his foe on rubbery legs with a right hand, he went in for the finish and got it a few moments later, 3:32

With the win, Abertillery’s Marshman improves to 21-5; Cedenblad, who saw a four-fight winning streak snapped, falls to 14-5. 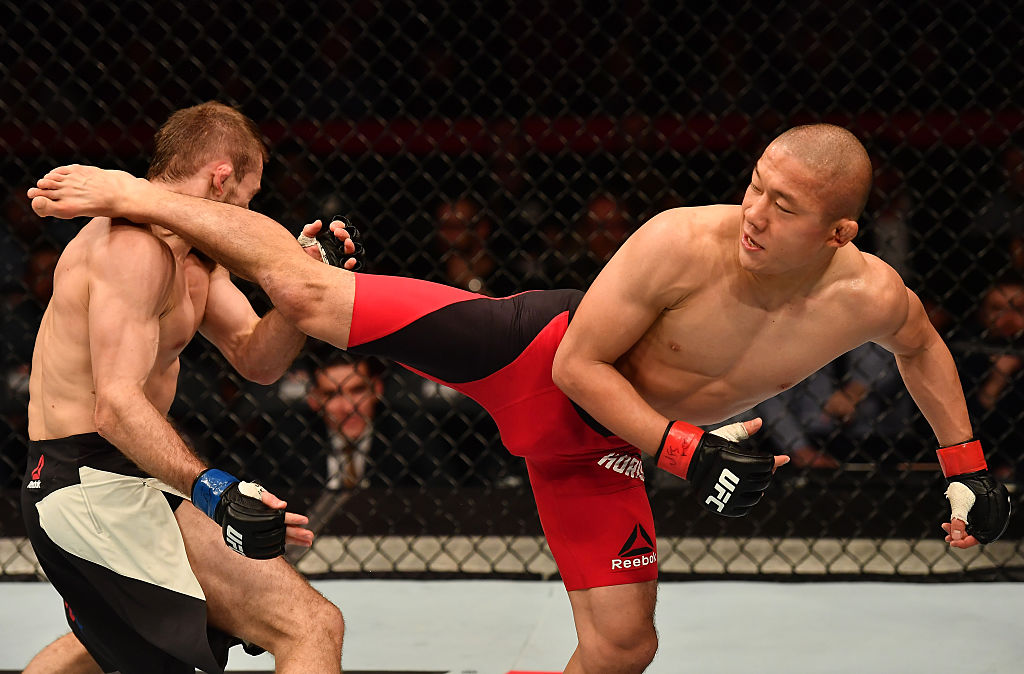 In a meeting of flyweight contenders, No. 4-ranked Kyoji Horiguchi delivered a disciplined and effective performance in winning a shutout three-round unanimous decision over No. 8-ranked Ali Bagautinov.

In a fight that was a lot more competitive than the final judges’ scores would indicate, Horiguchi mixed up his attacks nicely, scoring well on the feet and doing well in the grappling realm as well. Bagautinov was never blown out of the fight, yet while he landed some hard strikes, he wasn’t able to catch up to the Tokyo native long enough to turn the tide. 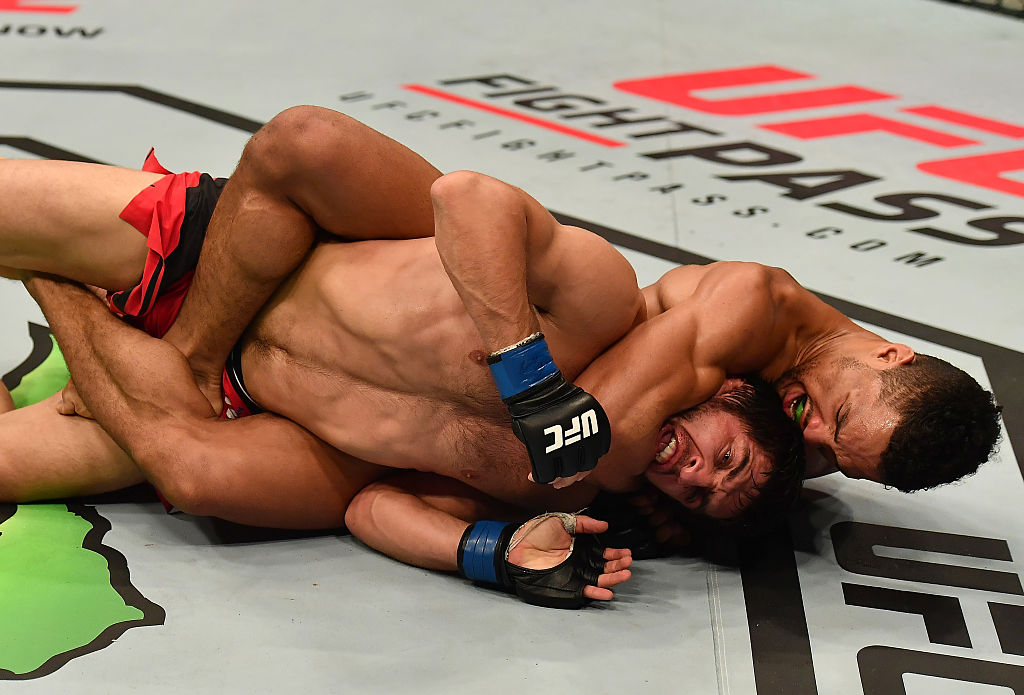 Lightweight up and comer Kevin Lee made a statement in his victory over Magomed Mustafaev, submitting the Russian in the second round and ending his 13-fight winning streak in the process.

A thudding body kick from Mustafaev got the bout off to a great start for the Russian, and a couple knees to the midsection followed before Lee got the fight to the mat. Mustafaev rose to his feet in the second minute and pressed Lee against the fence. Midway through the fame, the two separated and Mustafaev showed off some flashy striking before he got grounded by Lee a second time. Lee briefly got the mount, but Mustafaev escaped and stood up, only to get slammed back to the mat. With 30 seconds left, Lee took his opponent’s back, but he was unable to finish matters before round’s end.

Lee’s pace and ability to mix things up didn’t let up in the second, and Mustafaev was unable to keep up. Finally, Lee’s quest for a rear naked choke struck gold with the technical submission coming at the 4:31 mark. 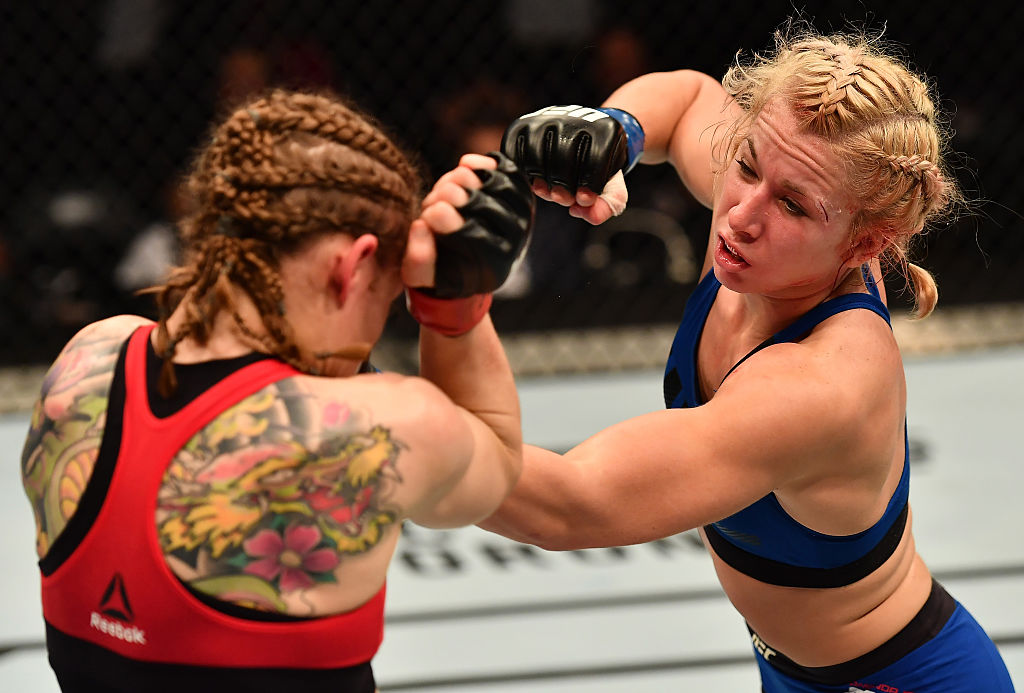 Michigan’s Cooper was seemingly in control of the first three minutes of the bout, as she used a nice stick and move strategy to keep Elmose from mounting an offense. A hard right hand with 1:20 left changed things up considerably though, as Elmose was able to knock her foe down and then cut her over the left eye.

Copenhagen’s Elmose stayed aggressive with her right hand in the second, but when the bout went to the mat, it was Cooper who took over late in the frame, coming close to a finish with some ground-and-pound and then an armbar just before the horn.

In the final round, Cooper kept the momentum going with solid striking as well as a takedown in the last minute that secured her the round and the fight. 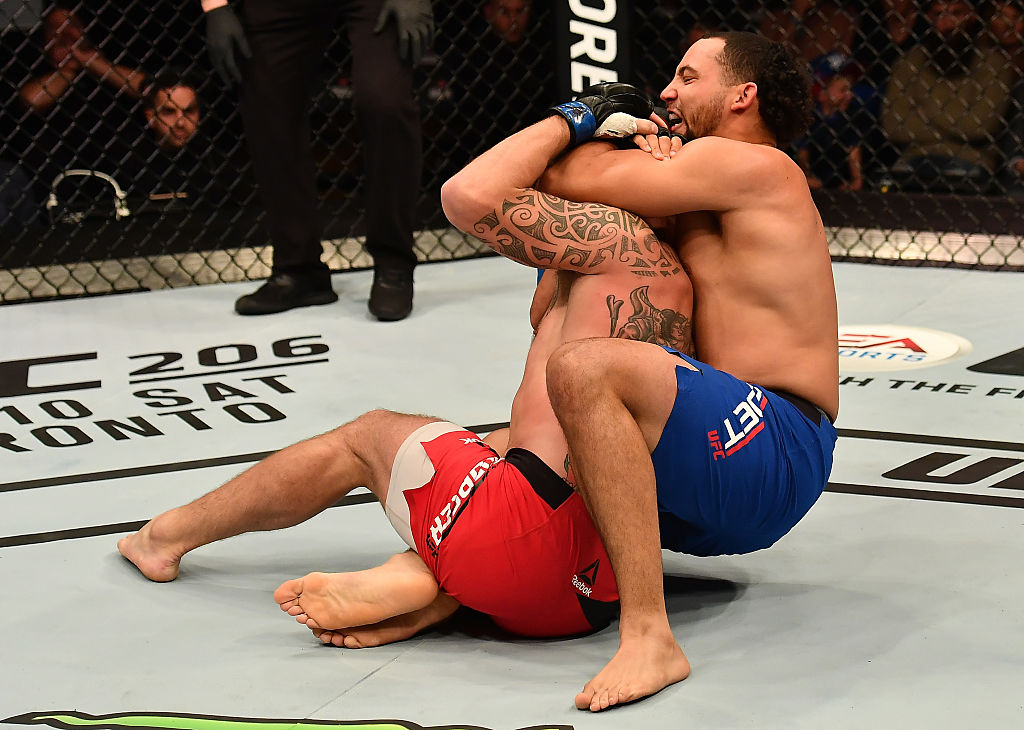 Unbeaten heavyweight prospect Justin Ledet surprised some with his first round win over debuting Mark Godbeer, using his submission game and not his boxing attack to secure the early victory.

After some good standup exchanges to kick off the fight, Ledet surprised Godbeer with a takedown. Godbeer got back to his feet quickly and got a takedown of his own, but Ledet scrambled out of trouble and locked in a rear naked choke that produced a tap out at 2:16 of the opening round. 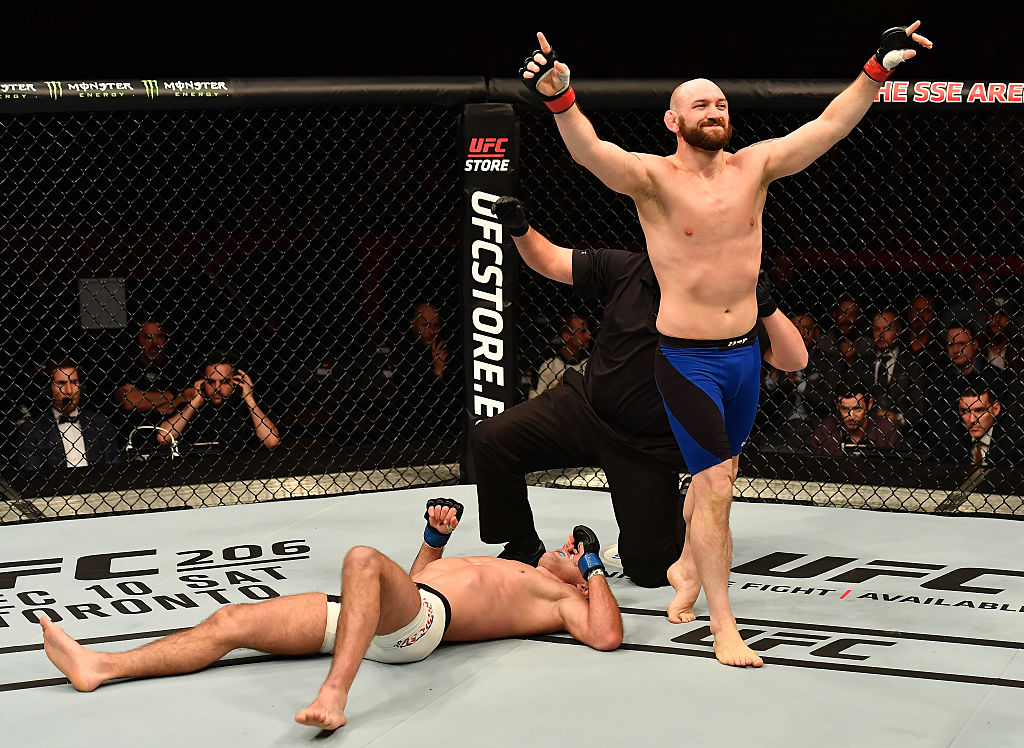 Welterweight veteran Zak Cummings put together a dominant effort in his bout against Russia’s Alexander Yakovlev, winning by second round submission.

Cummings was in control from the start and he never let up as he put Yakovlev on the defensive and kept him there. After controlling the bout into the second round with his striking, Cummings threw off a Yakovlev takedown attempt, went to the mat and locked in an armbar from the top position, ending the match at 4:02 of round two. 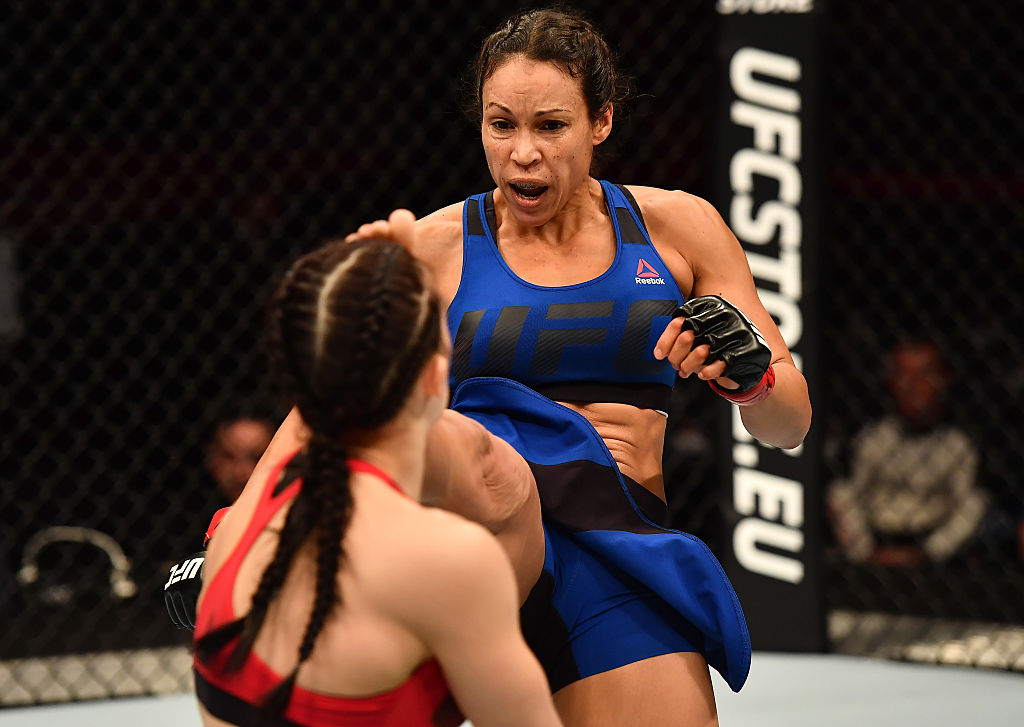 Bantamweight contender Marion Reneau got back in the win column in her first bout since a controversial loss to Ashlee Evans-Smith, leaving the judges out of it as she stopped Milana Dudieva in the third round.

Reneau’s jab controlled the action early in the first round, and while Dudieva responded with a takedown midway through, Reneau immediately began looking for a submission from her back. With 90 seconds left, the two rose, and while Dudieva’s defense was solid, her offensive was only showing up sporadically.

After a solid showing while standing and in the clinch during the first half of the second, Dudieva got back into it with a throw to the mat followed by strong clinch work against the fence once they rose. Reneau finished stronger though, as she reversed position and began firing away with close range strikes until the horn.

With Dudieva winded, Reneau kept the pressure on in round three, and after more work in the clinch, the bout went to the mat, with “The Belizean Bruiser” landing in the mount position, where she landed a series of unanswered blows that forced the stoppage by referee Grant Waterman at 3:03 of the final frame. 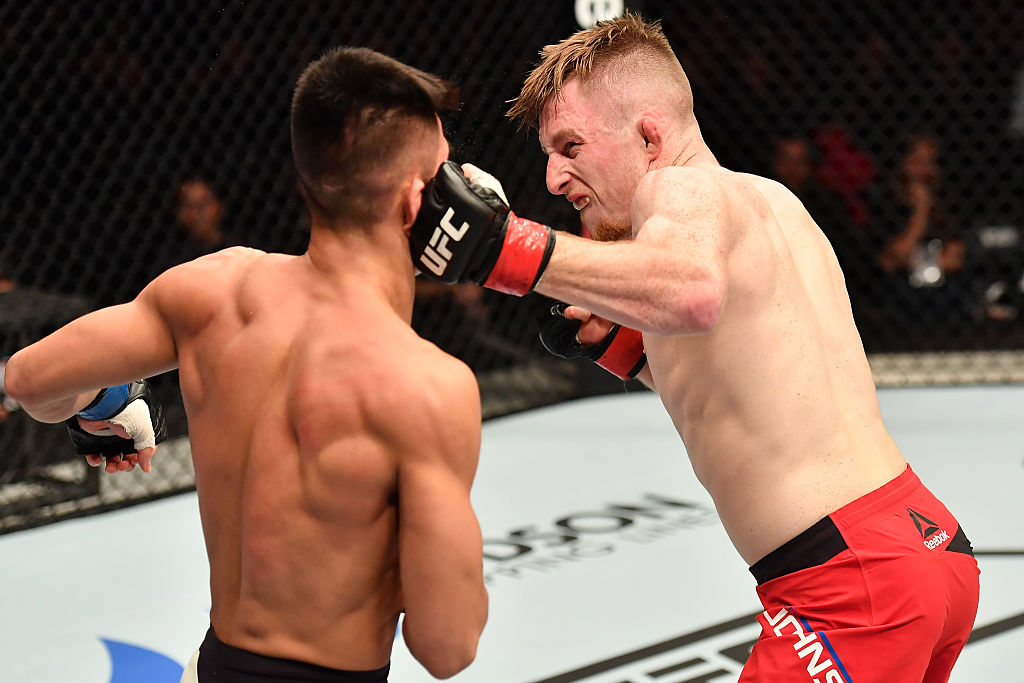 Kwak fed Johns a steady diet of leg kicks before the Welshman responded with six consecutive takedowns. Kwak rose quickly from each, but Johns’ pressure style was wearing him down and building up points. On takedown seven, Johns was able to keep Kwak grounded for the rest of the frame.

An uppercut by Johns rocked Kwak early in round two, but instead of sticking to the standup game, he looked to secure yet another takedown, and he got it in the second minute of the stanza. Kwak found his way to his feet, and this time, Johns stuck to his striking, highlighted by a jumping knee that got the Seoul native’s attention. In the final two minutes, Johns continued to impress with his striking, and a takedown followed on his tiring foe.

Kwak made a strong charge in the early stages of round three, but his striking attack was nullified by a takedown by Johnson, and the Swansea product kept Kwak there until there was only 1:40 left in the fight. But there would be little daylight for Kwak, who was kept locked up until the final seconds. 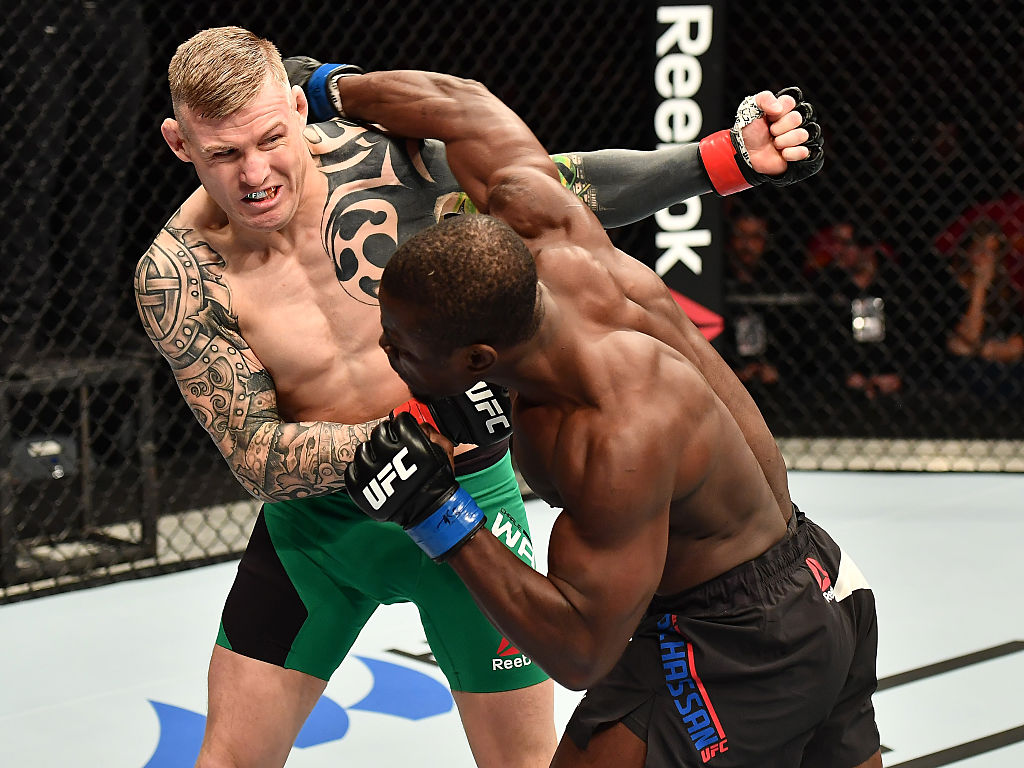 It may be difficult to call 31-year-old Abdul Razak Alhassan a phenom, but the Texan’s record certainly reflects such a title, and on Saturday, the welterweight improved to 7-0 with a quick knockout of fellow newcomer Charlie Ward.

The win took just 53 seconds, the latest finish on a record that has seen Allhassan never go past 1:26.

Hurting and dropping Ward (3-2) with a hard right uppercut in the opening moments, Alhassan refused to let the gutsy Irishman off the hook, with a final right hand sending Ward into the fence and prompting a stoppage from referee Marc Goddard.