Horacio Gutierrez: The Punisher's Due 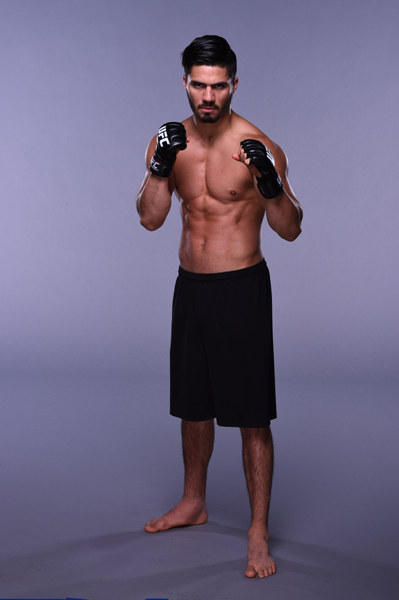 Despite being a relative newcomer to the pro MMA game, Horacio Gutierrez knew the gravity of the situation when he suffered an ankle injury early on season two of The Ultimate Fighter Latin America. Running through the competition or even making it to the semifinals would likely earn him a fight in the UFC, but withdrawing due to injury or losing while less than a hundred percent would likely mean a return to the local circuit.

But the Guadalajara native wasn’t ready to go home yet, and if he was going to lose against Danny Salas, he was going to go down swinging. And he had no intention of losing.

“I never had a doubt,” Gutierrez said. “Once they selected me to fight Salas, I put it in my mind to win. I never get into the cage without being sure that I’m going to win. I knew it was going to be a hard lesson, but, in the end, I knew I would come out with the victory. I'm a very confident fighter. I trust my skills and my preparation, and I have the frame of mind to win.”

Gutierrez won, taking a split decision over Salas that required a third sudden victory round. After getting his hand raised in the quarterfinal matchup, the Team Escudero member had an easier go in the semifinals, halting Marco Polo Reyes in the first round, and all of a sudden, he had punched his ticket to Saturday’s lightweight final against Enrique Barzola in Monterrey, Mexico.

To make it to the UFC after four amateur and four pro fights is a remarkable feat. To make that debut in your home country is even more notable. It was all part of the plan for the 25-year-old.

“I knew it would happen,” he said. “I decided mentally a year ago that I would prepare myself to fight in the UFC in Mexico. I’m always positive, so I told everyone it would happen and now it’s about to happen.”

It is, but if there’s any wrench to be thrown into the works, it’s that the only thing standing between Gutierrez and a UFC contract is a win over his TUF LATAM 2 teammate, Barzola.

“He is a fighter with a lot of heart, who never stops,” Gutierrez said of the Peruvian battler. “We were roommates, but this is business and it is my dream, so it’s an obstacle that I will have to overcome.”

Such dilemmas are part of the gig on The Ultimate Fighter, where you train together and cheer for each other for six weeks, then all of a sudden, you have to fight your new friend for the opportunity to change your life and career forever. Of course, getting through situations like this is what makes UFC fighters, contenders and champions, and Gutierrez was willing to pay that price to get his shot in the big show.

“It was the best experience of my life,” Gutierrez, who cites Chuck Liddell and Juan Manuel Marquez as influences, said. “It was incredible to do something that many don’t have the opportunity to live out. It happened to me and I took advantage of it to the maximum. I matured a lot as a fighter, but mostly as a person, demonstrating that my mind is very powerful and that I can accomplish anything I set out to do.”

Next on the accomplishment list is the TUF LATAM 2 title, and “The Punisher” doesn’t want to just win; he wants to leave an impression.

“I’m a fighter very sure of himself who goes all out to finish a fight,” he said. “I’ve had many fights in my life, but never a boring one. Expect a spectacular fight, and prepare to celebrate with me because we are going to win.”