“As soon as I finish one goal, I set another one straight away and I feel like I’m getting to my destination a lot faster by doing that," Hooker said.
By E. Spencer Kyte • Dec. 12, 2018

Over the last two years, Dan Hooker has turned himself into one of the most compelling fighters in the lightweight division.

Following a six-fight run at featherweight that saw him alternate wins and losses, the 28-year-old New Zealander opted to stop “shooting himself in the foot” by cutting down to the 145-pound limit. Instead, he relocated to lightweight and started showcasing his dangerous potential.

First came a second-round win over Ross Pearson where he stopped the British veteran dead in his tracks with a forceful knee to the chin. A third-round submission of prospect Marc Diakiese followed. This year, Hooker has taken things to another level, registering first-round finishes of Jim Miller and Gilbert Burns to force his way into the Top 15.

So what does the City Kickboxing representative think of his handiwork over the last two years and his rapid ascension in the lightweight division?

“It’s not time for that,” said Hooker, who prefers to remain locked in on the next challenge rather than reflect of previous conquests. “There is a very short period of time where you’re a professional athlete and you have your physical prime and the physical capabilities to chase this goal.

“I’ll have a long time once I walk away from this sport to reminisce on the good old days of beating Jim Miller and all these guys, legends of the sport — I can sit on my porch and tell all these tales, but as of now, I’m just hungry.

“The longer you stay content, the longer it takes you to set your next goal,” he added. “As soon as I finish one goal, I set another one straight away and I feel like I’m getting to my destination a lot faster by doing that.”

In the aftermath of his UFC 226 triumph over Burns, Hooker petitioned the organization to stop putting him in the cage with overmatched opponents, suggesting it was a potential Health & Safety violation.

The line drew laughs and became a good calling card for the emerging contender from Auckland, but it also helped him secure the matchup that he wanted this weekend in Milwaukee.

“No complaints from me. This is exactly what I asked for,” he said of Saturday’s co-main event pairing with Edson Barboza at the Fiserv Forum. “I’m looking to compete with the best guys in the world and he was the best guy I could see in front of me.”

A fixture in the Top 10 for the last several years, the Brazilian veteran enters this weekend’s event at a crossroads, having lost consecutive bouts for the first time in his career. At the same time, he ended a long stay in New Jersey as a member of The Iron Army in the summer, moving his family back to Florida, where he joined the ranks at American Top Team.

While some might question Hooker’s targeting of Barboza as an attempt to face a fighter in the midst of a skid, the truth is that the surging lightweight viewed the man he takes on this weekend as the most dangerous fight available to him at this time.

“I just thought he was the toughest guy in the realm of possibilities,” said Hooker, explaining his reasons for requesting a meeting with Barboza. “Obviously, the champ — Khabib — and the higher up the pecking order I can get (the better), but Barboza was the guy no one was saying his name.

“I’m ranked 14th and he’s ranked No. 5 and no one was saying, ‘Edson Barboza.’ I wanted him because everyone is afraid to fight him and he’s higher up there and I feel like he can bring out the best in me. I feel like the better the opponent, the better I do myself.

“I thought after the Gilbert Burns fight and I got ranked, everybody would be saying my name,” he added. “I thought I would have fights coming out of my ears, but it wasn’t the case. I didn’t have anyone calling me out, so I had to look for these fights. I had to call these names and get these fights, so we’ll see. It’s probably going to be slim pickings if I have a good result against Edson.”

Along with his teammate and “frenemy” Israel Adesanya, Hooker has been at the forefront of the current surge of talent from Australia and New Zealand climbing the ranks in various divisions throughout the promotion.

But while Adesanya has spoken routinely about how many fights and whom he needs to beat in order to reach the top of the middleweight division, his long-term training partner and television co-host operates from the opposite end of the spectrum.

“Israel is the one who is on this vision quest and he can see the future — he’s got that magic f****** crystal ball, but I don’t have a crystal ball; I eat what’s on my plate,” said Hooker with a laugh. “I’ve got two potatoes and a steak — I’m gonna eat that and I’m a happy man. I’ll wait ‘til I’m hungry again and then I’ll have another meal.

This weekend, Barboza represents the next opportunity for Hooker to get in the cage and feast. Although he’s cognizant of the threats the Brazilian presents once the Octagon door closes, the emerging contender is hungry to continue proving himself and put himself in the thick of the title chase heading into next year.

Not that he’s thinking about any of that. 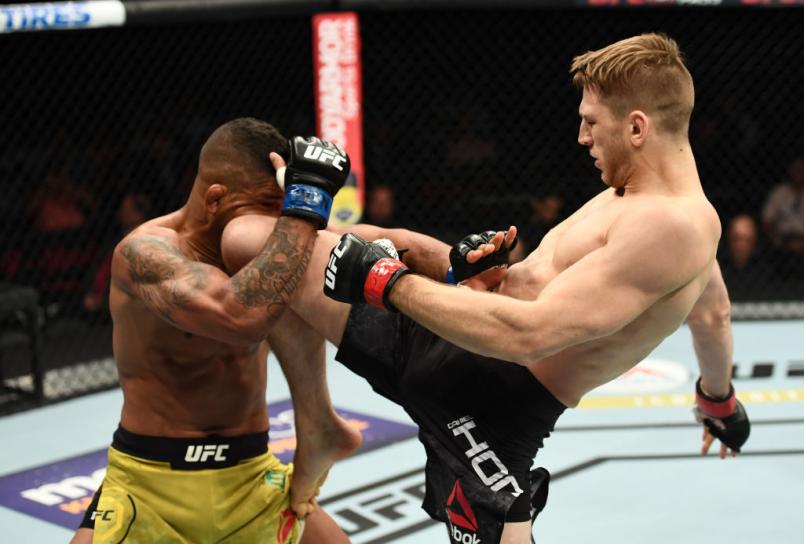 “I know myself and if I win, I’m just going to want to fight someone else further up, so there is no real satisfaction in this for me,” admitted Hooker. “I don’t think about it. If I get that perfect, flawless fight that I’ve always dreamed of, but never got, maybe I’ll be happy, but chances are, going off previous results, I’ll be calling out another name and looking for another fight.

“A million different things can happen and I’m prepared for all of them. Barboza is a guy that with one strike, one shot, he can flip the fight on its head and take you out and I’m excited to go in there and show the world what I can do.”

And if things keep going the way they have over his last four outings, Hooker could very well be in line for a promotion, both within the lightweight division and in terms of a potential side hustle as well.

“I feel like I’m definitely in line for one of those Forrest Griffin-type jobs at the Performance Institute,” he joked. “I can be the Health & Safety Advisor.”

Advisory No. 1: fighting Dan Hooker is bad for your health and safety.