"Honest" Mousasi on fire & ready to avenge loss to Hall

The real Gegard Mousasi has finally stood up

Gegard Mousasi has always been a fan favorite – his constant “just got out of bed” state of being and abundant skill inside the cage endeared him to observers even before he arrived in the UFC.

Over the last year, the 31-year-old veteran’s profile has risen even more, though it has little to do with his exploits in the cage.

Make no mistake about it: Mousasi has been on fire in the Octagon over the last year, collecting three straight victories, including emphatic stoppage wins over Thiago Santos (UFC 200) and Vitor Belfort (UFC 204) to re-establish himself as a contender in the middleweight ranks, but it has been the previously soft-spoken standout’s sudden decision to start speaking his mind and stating his opinions that has really started to turn heads.
RELATED: WATCH - Mousasi vs Hall | Top 5 Media Day Moments | Hall-Mousasi - One More Time | Belfast Fantasy Cheat Sheet

“I was (politically correct) in MMA because I was trying to be polite, but it doesn’t help; it doesn’t get me nowhere being a nice guy,” Mousasi laughed. “Nobody likes a nice guy.

“Before, I wouldn’t say what I was thinking because you want to be respectful, you want to be humble, you want to be polite, you don’t want to upset anybody,” said the 31-year-old, who notched the 40th win of his career back in October. “But even if you do that, people are still going to talk s**t about you, so what’s the difference? At least now I’m giving my real opinion and that’s it.

“I’m not an actor and I’m not trying to be somebody else; I’m just being me. I think people just appreciate (honesty),” he added with a pause. “Or they don’t because whatever you do, people are either going to like you or not like you and I can’t satisfy everybody.”

One of the topics Mousasi has been quite candid about is his September 2015 loss to Uriah Hall in Japan. 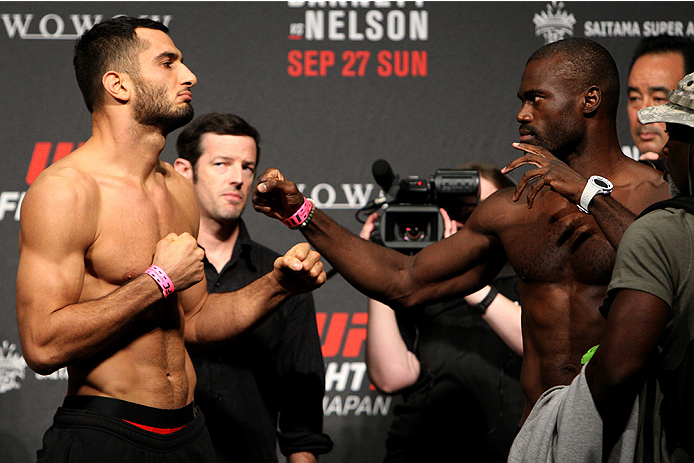 Entering the bout on a two-fight winning streak, Mousasi was heavily favored and controlled the action throughout the opening round, but seconds into the second round, the former Ultimate Fighter finalist connected flush with a jumping, spinning back kick as Mousasi changed levels.

His legs turned to rubber and Hall pounced, bringing the fight to a close in a flash, halting the former Strikeforce light heavyweight champion’s climb up the middleweight ladder and reminding everyone of how dynamic and dangerous Hall can be in the cage.

Mousasi called the fight-turning strike a fluke and the sound clip has been used to score the commercial promoting Saturday’s rematch between the two, which serves as the main event of this weekend’s first of two shows.

“It bugged me a lot that (first) fight, but I get the chance to fight him (again). It doesn’t always go your way. I’ve had so many fights and this time, it went wrong for me. Is he a dangerous striker? Yeah. Can it happen again? Yes. Do I believe I’m the better fighter? Yes. Are the chances slim that he’s going to win? Yes.

Expected to make an instant impact upon arriving in the UFC, Mousasi stumbled, splitting his first four fights. To be fair, his losses came against veteran contenders Lyoto Machida and Ronaldo “Jacare” Souza, but a 2-2 start to his time in the Octagon still wasn’t what people anticipated.

But that’s where Mousasi’s “unaffected” demeanor comes in handy, as he took his early struggles in stride, made the necessary adjustments and had things headed in the right direction again, only to lose to Hall.

“Injuries, coming back from injuries, taking fights that I wasn’t ready for – I can’t make excuses (for those early losses), but I think I’m in a better place now,” he said. “I’m mentally right, I have no injuries and I’m in a routine. I cut weight, I fight, I’m in training, I fight – I’m in a good routine.

“The Jacare fight and Machida, I know what I did wrong, but the Uriah Hall fight, that set me back and (the bad thing about it) was I was finally feeling (good), feeling I can beat anybody, but s**t happens.

“Now I get the chance to set the score right.”