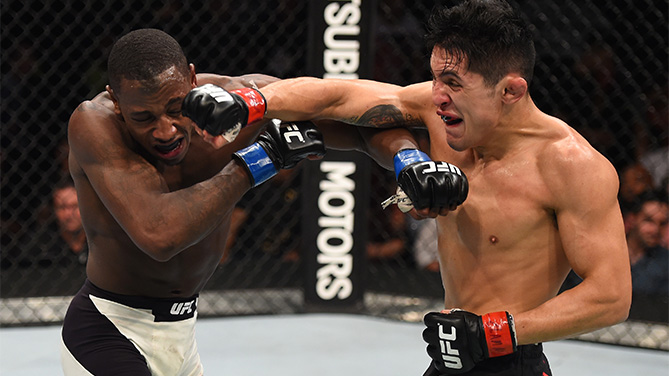 Erik Perez of Mexico and Taylor Lapilus of France trade punches in their bantamweight bout during the UFC Fight Night event at Arena Monterrey on November 21, 2015 in Monterrey, Mexico. (Photo by Jeff Bottari/Zuffa LLC)" align="center" />
Back in action for the first time since June of 2014, Erik Perez thrilled his hometown fans at Arena Monterrey in Monterrey, Mexico Saturday, winning a hard-fought three-round unanimous decision over fellow bantamweight prospect Taylor Lapilus of France.

The first five minutes were fought on the feet, Lapilus starting strong and Perez roaring back in the second half of the round, leaving the judges with a scoring dilemma when the horn sounded.

In the second minute of round two, a straight left by Lapilus dropped Perez and the Frenchman locked in a guillotine choke. Perez pulled his head out of trouble and took over from the top position on the mat, keeping Lapilus grounded for the rest of the frame.

The solid back-and-forth action didn’t let up in the final round, with some exciting scrambles on the mat added to the striking portion of the bout. With two minutes left and the bout up for grabs, Perez got a big takedown and didn’t let Lapilus up, an effort that locked the bout up for “Goyito.” 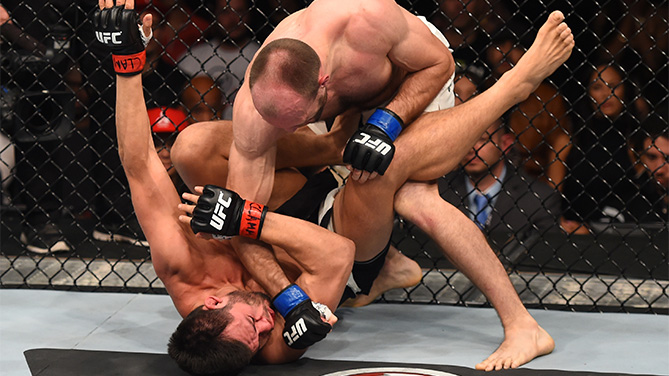 Hector Urbina’s Monterrey homecoming was spoiled by Poland’s Bartosz Fabinski, who ground and pounded his way to a unanimous three-round decision in welterweight action.

After a touch of gloves, Fabinski shot out a jab and took Urbina to the mat, immediately implementing his ground-and-pound attack. At the midway point of the round, referee Mario Yamasaki restarted the bout, but Fabinski returned the fight to the mat seconds later, and he kept it there for the rest of the round.

The pattern of Fabinski dominance continued for the first four minutes of round two, until Urbina was able to reverse position and escape the bottom position. But as the two stood, Fabinski landed a hard knee and then opened a cut under Urbina’s left eyebrow, adding to the Mexican’s woes.

Little changed in the final round, Fabinski controlling the bout on the mat and Urbina having no answers for “The Butcher,” making the verdict an easy one for the judges. 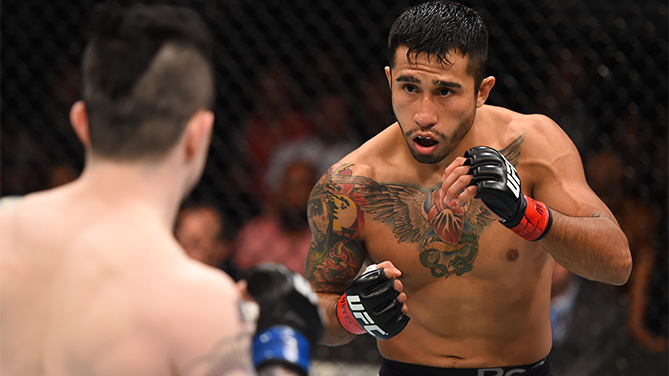 Alejandro Perez of Mexico battles Scott Jorgensen of the United States in their bantamweight bout during the UFC Fight Night event at Arena Monterrey on November 21, 2015 in Monterrey, Mexico. (Photo by Jeff Bottari/Zuffa LLC)" align="center" />
ALEJANDRO PEREZ vs. SCOTT JORGENSEN

Fighting for nearly five minutes on an injured leg, bantamweight veteran Scott Jorgensen gave a courageous effort against former TUF Latin America winner Alejandro Perez, but it was the Mexican battler who eventually emerged victorious via TKO in the second round.

Jorgensen began the fight working his striking game, before he started implementing his wrestling attack. Perez did hit the deck once, but he rose immediately, defending the rest of the attempts well. The rest of the round was close until Perez landed a kick to Jorgensen’s left leg that left the Idaho native limping back to his corner.

Jorgensen was basically fighting on one leg as the second round began, and Perez went on the attack, but in a controlled fashion. As the round progressed, the gutsy Jorgensen hung in there and even had some moments of daylight, but finally, with less than a minute left, Jorgensen attempted a kick and fell to the canvas in pain, forced to tap out at 4:26 of round two. 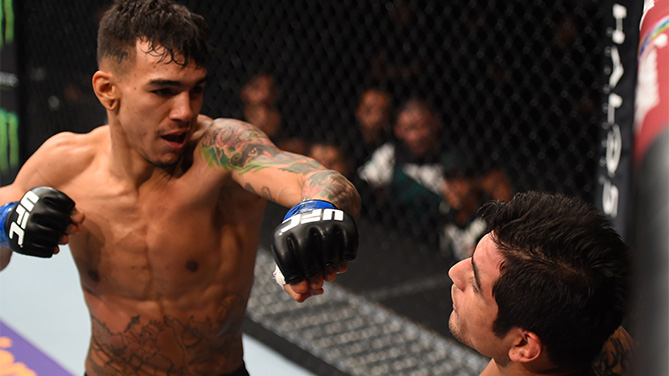 Andre Fili of the United States punches Gabriel Benitez of Mexico in their featherweight bout during the UFC Fight Night event at Arena Monterrey on November 21, 2015 in Monterrey, Mexico. (Photo by Jeff Bottari/Zuffa LLC)" align="center" />
ANDRE FILI vs. GABRIEL BENITEZ

On target from the start, Sacramento’s Fili (14-4) stayed busy until he found his opening, first wobbling Benitez with a right kick to the head with a little over three minutes left in the first. Moments later, that right kick scored again, and this time, Benitez (18-6) wasn’t able to shake it off, with a furious combination of punches forcing John McCarthy to stop the bout at the 3:13 mark.