Every day, Yair Rodriguez feels the distance that separates him from his family.

He’s homesick. Time and distance can do that to a 22-year-old kid living in another country, speaking another language, trying to assimilate to a new culture.

But he’s trying. He understands that his future is in the United States, not in Mexico, where his heart lies.

So he trains in Chicago and fights to establish himself in the UFC, wherever it takes him. He also knows the rewards can be great if he sticks with it.

Even so, his loneliness is tough to overcome.

Very serious. Rodriguez, who is from the state of Chihuahua in northern Mexico, is among the fighters appearing on the prelim card Saturday night at UFC 192 in Houston. He’ll oppose veteran Dan Hooker of New Zealand, who has a 13-5 record (2-1 in the UFC).

Rodriguez has a 6-1 MMA mark, but his brief run has earned him raves from UFC president Dana White, who has called him “a superstar in the making” and compared him to Anthony “Showtime” Pettis.

“El Pantera,” as he’s known, made a favorable first impression last year by winning the TV series “The Ultimate Fighter: Latin America,” defeating castmate Leonardo Morales in the final. In his next bout, at UFC 188, he wowed fans with a spectacular display of striking and an ability to reverse takedowns and apply submission holds, even from his back.

His split decision victory over Charles Rosa earned Fight of the Night honors, although it was probably more notable for his post-fight interview with announcer Joe Rogan in which he threw up, a result of food poisoning.

Saturday’s fight at the Toyota Center in Houston should help him feel closer to home, partly because of a sizable Mexican-American crowd expected to attend. His father, Trigo, will also be there, making for a long-awaited reunion.

I feel like I need to be with (my family), but I can’t. Not now. My career is serious now -- Yair Rodriguez

“He loves his family, and when he misses them, it’s tough for me,” said Izzy Martinez, one of Rodriguez’s trio of coaches. “I’ve got to be the guy to remind him that there’s kids in college who are out there studying and don’t get to see their parents because they can’t afford it. It sucks to see him moping around, that’s for sure.”

Martinez has been a friend and mentor to Rodriguez for the past two years. They met in Albuquerque when Rodriguez and other Mexican fighters were preparing for “TUF: Latin America,” and it was there that Martinez, who is Rodriguez’s wrestling coach, took notice.

“You kind of heard the buzz around him,” Martinez said. “There was a young, talented kid around the gym who was athletic and driven, spoke no English and didn’t know any wrestling but had talent. That’s music to my ears, being a wrestling coach.”

Martinez relocated to Chicago, and Rodriguez followed. Mike Valle is his striking coach, and Greg Jackson, the renowned MMA coach who has an academy in Albuquerque, works on game planning. In their own way, all of them play critical roles in the young Mexican fighter’s education.

“They’re all my mentors in life -- coach Izzy, coach Greg, coach Mike, my father,” he said. “I always listen to everybody because you never know who can teach you. Everybody can teach you something if you open your mind and your ears to hear what they have to say. You’ve got to grab the best thing from everybody so you can grow as a person and an athlete.”

Rodriguez has done that. He spoke little English when he arrived in the U.S., but he’s conversational now, even preferring to use “bro” when speaking to someone.

Martinez, who has tutored such fighters as Jon Jones, Clay Guida and Holly Holm, moved Rodriguez into the basement of the home he shares with his girlfriend, Lissy. Rodriguez has made it his personal abode, installing a new carpet, couch, TV and king-sized bed – a home away from home.

“I made it comfortable for me,” he said. “I like to go there at night to relax and stretch out.”

In training, his wrestling has improved steadily under Martinez’s watchful eye. But there is still a lot to learn.

“He knows how to stay off his back, and that’s part of the key and transition to becoming a fighter,” Martinez said. “He’s clever. He’s got a great Jiu Jitsu game. He basically went from being a beginner to probably being a pretty good high school wrestler at this point, and he’s about a year or two away from getting to where he needs to be, a Division I type of wrestler and mentality. The mentality is where he can score and take you down in any position. He’s come a long way, but we’ve got a long way ahead of us.”

Rodriguez’s natural skills are his quickness and athletic ability. He can throw a variety of kicks from any position and is capable of applying a submission hold even from his back.

His moves are often incredible to see, but he insists he doesn’t plan them in advance.

Asked if he has anything special planned for Hooker, he said, “I don’t know, bro. I practice it every day, but you never know if you’re going to use it in the fight. You never know what can happen.”

Martinez said he doesn’t mind his fighter’s creative flair, but he also wants Rodriguez to know that it can sometimes backfire.

“I tell Yair, ‘When you get yourself in a bad position, you have to find your way out of it.’ That’s the key,” Martinez said. “I don’t mind him doing all his crazy kicks and crazy type of fighting. He just has to prepare to be in a bad position and prepare to get out of it. If he can do a double spinning kick on every guy, let’s do it. I’m a fan of it.” 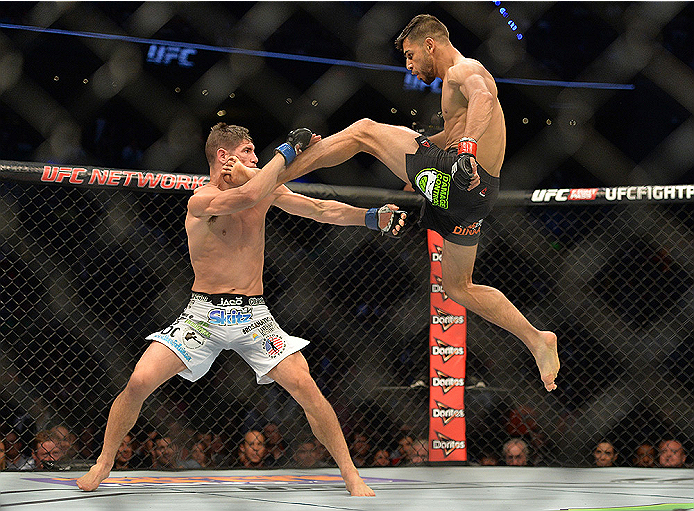 The lessons come slowly and the grind is tedious, but Rodriguez understands the reasons he’s doing it. It means enduring months away from his home in Mexico, but the potential rewards are great.

And with today’s technology, his family is never more than a phone call or email away.

“I’m texting with them every day, sending them messages,” he said. “When I have a chance, when I’m resting at night, I call them to say hi, to see how they’re doing, what’s new.