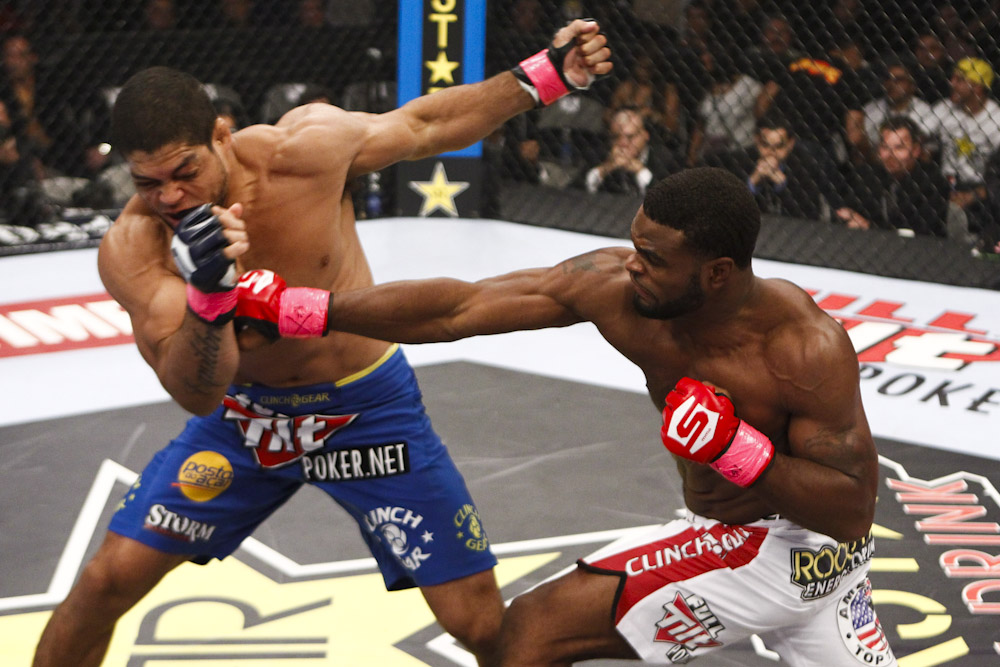 Throughout all the ups and downs over the last years, there has been one constant in the Strikeforce welterweight division: Tyron Woodley.

While champions and challengers have come and gone, the 30-year-old University of Missouri product has remained, eager to complete the journey he started with a win over Sal Woods in the third fight of his professional career.

Woodley could be considered the first – and perhaps only – homegrown superstar on the Strikeforce roster; a fighter who has gone from being a raw prospect with a strong wrestling background to a championship contender, and potential top 10 welterweight almost entirely under the Strikeforce banner. He cut his teeth on the Strikeforce Challengers series, becoming the poster boy for what those shows were about by collecting wins over veterans Zach Light and Nathan Coy and fellow prospects Rudy Bears and Tarec Saffiedine to help him force his way into the title discussion.

He was still at the top of the division, waiting his turn when then-champion Nick Diaz departed for the UFC, and controlled former title challenger Paul Daley to earn his ninth straight win and maintain his position as the man to beat in the 170-pound ranks. Despite the welterweight title sitting vacant, Woodley’s January bout with prospect Jordan Mein remained a non-title affair. Though one judge saw the fight in favor of the promising Canadian, two awarded the decision to Woodley, the win moving his record to a perfect 10-0, but leaving him without a potential opponent or title shot on the horizon.

At times, it had to feel like Saturday’s bout for the Strikeforce welterweight title would never come.

“I’m a big believer in God being in control, and really feel that if it were my time to get a title shot at that time, I would have had it,” admits the unbeaten Woodley, who squares off with former UFC middleweight title challenger Nate Marquardt to fill the void atop the welterweight division on Saturday night at the Rose Garden in Portland, Oregon.

“Patience has definitely been produced during this walk of faith, and I also think I’m more mature, I’m more focused, and I’m more prepared for a world title bout than I was then. Back then, I was younger, I was funky, I was upset; I felt like I was getting overlooked. I felt like I wasn’t a good fight for anybody with a name; it would be too risky for them to fight against me, but now I think it’s time.”

While the quest to claim championship gold has been something that motivated the former Division I wrestler from Day One, the lengthy journey to this point has transformed Woodley’s view of what winning the title on Saturday night would mean for him.

As a member of American Top Team, Woodley has seen several of his teammates reach their championship dreams in different organizations, and attain stardom inside the cage. He wants to add his name to the roll call of champions produced by the renowned team based in Coconut Creek, Florida, and show the people in his gym that loyalty and hard work do pay off in the end.

“In reality, the belt used to mean being at the top of the weight division, but at this point, it’s more important because it’s for my family, it’s for my gym, it’s for American Top Team. I’ve walked these gym floors many, many times and seen guys like Denis Kang, Thiago Silva, Hector Lombard, Thiago Alves hanging from the pillars and these walls, and it’s always been my dream to see my picture hanging up there with a belt around my waist, and for me, that time is coming.

“It’s the right time. I feel good about it. I feel good about the training, and the guys that are in my circle who are all positive, and I just feel that it’s God’s will for me to go out here and win in devastating fashion, and get a message across.

“For me, it’s about having been able to stay focused on the blueprint, stay focused on the path,” continued Woodley. “When I get this belt, it’s going to mean more than just a championship. It’s going to give people hope and inspiration, and the things I say after I win, people are going to know I’m for real and that what I’m saying is for real.”

In spite of his unbeaten record and wins over the likes of Daley and Mein, Woodley is a target of more criticism than he is a recipient of praise. After beginning his 10-fight run of success with five consecutive finishes, the Brazilian jiu-jitsu purple belt has earned decision victories in four of his last five bouts, and been tagged with the derisive label that dogs many of the sport’s suffocating wrestling-based standouts: boring.

While fans and critics rarely seem to attack standup artists who can’t stop a takedown, the success of wrestlers who play to their strength are often disparaged for their lack of finishes, and tagged as “lay-and-pray artists” or “wet blankets” who are disinterested in really fighting.

It’s a label Marquardt has thrown out there about his upcoming opponent in the preamble to Saturday’s showdown in the Pacific Northwest. As far as Woodley is concerned, it’s the guys repeatedly getting put on their backs who should be coming under fire, and Marquardt’s out-of-character name-calling is his way of having excuses at the ready when he loses this weekend.

“I think wrestlers in general, we’ve shown that we’ve evolved,” offered Woodley, a hint of frustration detectable in his voice. “I’ve knocked guys out. I’ve submitted guys as well. Six of my ten fights have been finishes, so for me, I know where I’m at in my career, I know what I am as a fighter, and the only thing I have to prove is to myself and the people who believe in me and spend time away from their family to train me. Those are the people I’ve got to prove something to. They know what I’m capable of, and I haven’t given everything that I’m capable of in a fight. I’ve given a piece, a piece, a piece each fight, and now it’s time to put the pieces together.

“I believe that if I want to get up, I’m getting up. If somebody goes for a takedown, I’m stopping it. If they take me down, I’m getting up, and I just think that’s a mentality that wrestlers have, but (the critics and complainers) don’t share that mentality. They feel that they can join in with the fans: “Aw, he’s just lay-and-pray.” Well if I just lay-and-pray, why don’t you stand and strike? You’re a grown man. You’re just going to lay down there with another man on top of you? You’re defenseless and can’t get up? It’s MMA.

“Nate traditionally is not a big crap-talker,” continued the former Missouri Tigers teammate of Bellator welterweight champ Ben Askren. “So this shows me his anxiety about this fight. He’s trying to pre-frame some excuses already: “He’s lay-and-pray. He’s boring.” He’s trying to get the people on his side.”

To his credit, Woodley won’t return verbal jabs. Instead, he’s complimentary of the man he’ll soon face, ranking him as the top opponent he’s faced to date, and speaking highly of the well-rounded skill set the former UFC and Pancrase standout will take with him into the cage this weekend.

He also harbors no resentment in regards to Marquardt being able to walk into a title shot in his Strikeforce debut. All he’s focused on is reaching the goal he set out for himself when he first committed to the organization a little over three years ago, and eliminating every opponent Strikeforce puts in front of him until there is no way to deny him a place in the upper echelon of the welterweight division.

“It is what it is,” Woodley said of Marquardt’s immediate title shot. “If you commit to an organization — I committed to Strikeforce, and nobody can question it. I’ve been a guy that’s committed to the brand; I haven’t talked about crossing over, I haven’t even mentioned leaving or anything like that. I’m here to be champ, and while I’m here, I’m with these guys. If Nate’s the best guy they have for me now, that’s who I’m fighting. After that, whoever’s the best guy they have, that’s who I’m fighting.

“When Diaz left, he hadn’t fought me yet. When I leave, I’m going to have fought everyone that has been in the division. When I get done going through Nate Marquardt, I’m going to go and fight (Kazuo) Misaki, not because I think he’s an easy matchup — I think he’s as tough a match-up as Nate is — but because he’s at the top of the weight class. I think if I leave and I go to the UFC or whatever — whatever happens when I finish my fights with Strikeforce — nobody will have anything to say. No stone will be unturned in Strikeforce, and I’m going to make a point of that.

“Everything has to make sense; it has to push me closer and closer to cracking the top 5, top 3, and eventually getting a chance to fight the best in the world, and I think he’s a step closer for me.”

For Woodley, Saturday’s contest isn’t about finally getting his overdue opportunity to fight for the welterweight title – it’s the start of the next chapter of his career, one he’s eager to embark on once he gets through with Marquardt.

“For me, I’ve never thought of not being the champ, so this is a new beginning for me. This is going to start the road all over ago. Now I go to being the champ and respected as one of the top 10 welterweights in the world, and I just keep going until I get to number one.”