There was a packed house inside the Ultimate Fighter Gym on Tuesday night in Las Vegas for the inaugural episode of Dana White’s Tuesday Night Contenders Series and everyone in attendance and those watching live on UFC FIGHT PASS were treated to a fast-paced, entertaining night of action inside the Octagon.

Here’s a look at what went down on Week 1 of this summer’s hottest new fight series. 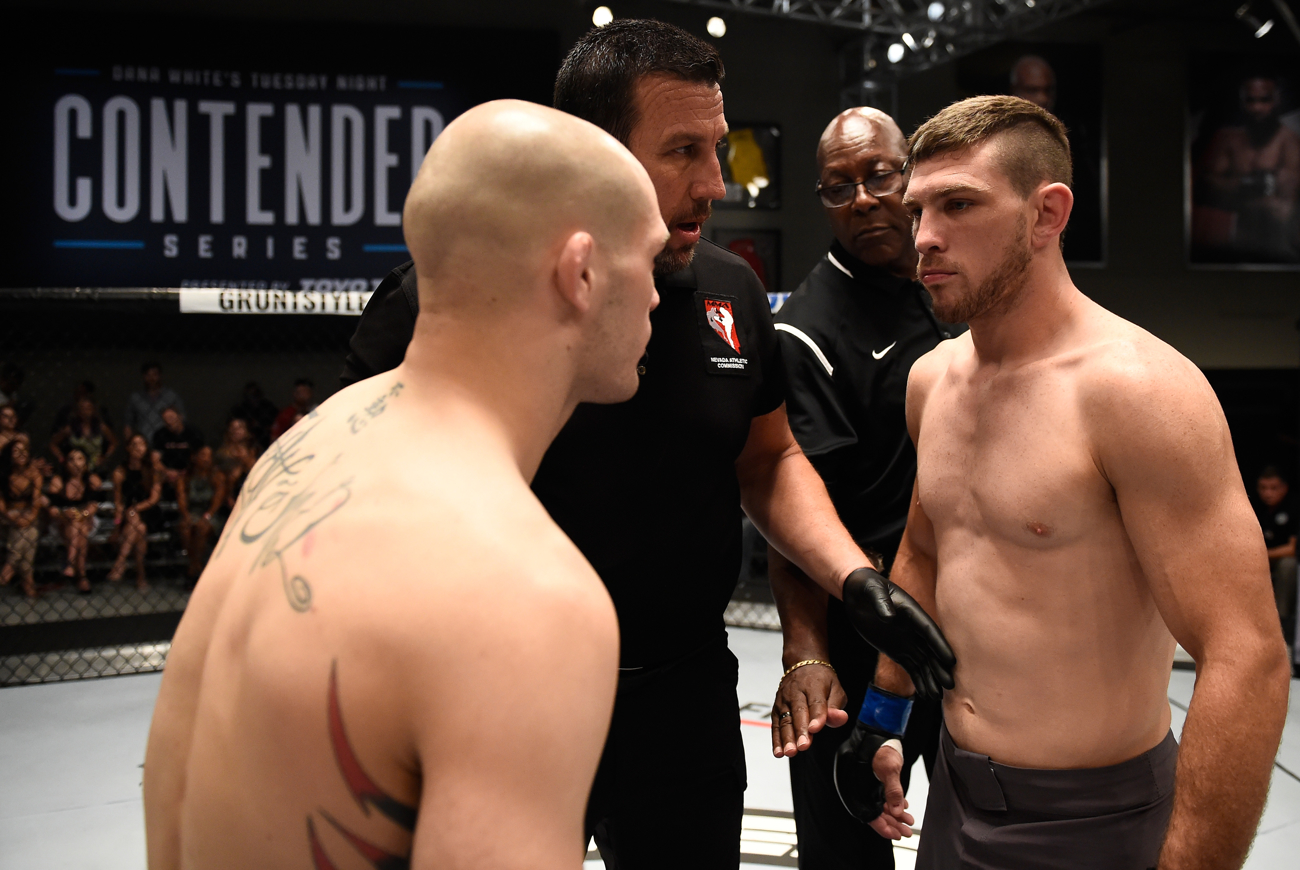 Holobaugh took full advantage of his opportunity to return to the Octagon, coming out of the gate throwing smoke, stinging Bessette early in the opening round and never letting off the gas until a sharp right hook put him down on the canvas for good.

The Louisiana native, who made a single appearance under the Strikeforce banner and one previous trip into the UFC cage earlier in his career, pressed forward, firing off combinations from the jump, backing Bessette against the cage and forcing him to cover up. Though he took a couple big counters, Holobaugh refused to take a backwards step and continued bombing away.

Just after the midway point of the first, Holobaugh pressed forward again and this time, he found a home for a nasty right hook that sent Bessette crashing to the floor, giving Holobaugh his fourth straight stoppage victory and punched his ticket back to the UFC.

Official Decision: Kurt Holobaugh by Knockout at 2:59 of Round 1

These East Coast heavyweight rivals had been scheduled to meet in the past, but it never came to fruition until Tuesday night in Las Vegas, and while things started slowly, business picked up and came to a close in the second.

Knowing each other and the power they carry made both Rebello and Anyanwu a little tentative in the first, but they both started opening up a little more in the second, with Rebello coming forward, connecting with a series of lead lefts early in the round. But midway through the frame, Anyanwu saw the straight coming and countered, crashing home a stiff right hand that put Rebello on the canvas and kicked off the finishing sequence.

Following the official announcement, Anyanwu looked towards White, shouting, “Holler at me” to the UFC President. Having now registered a pair of impressive knockout finishes with White in attendance and pushing his winning streak to five, Anyanwu did make an impression.

Official Result: Zu Anyanwu by Knockout at 3:04 of Round 2

The middle bout of Tuesday’s card was a contrast in styles, pitting the frenetic, high output approach of Turcios against Salmon’s patient, powerful boxing.

Turcios, who fights out of Team Alpha Male, looked to dictate the pace early and drown Salmon with volume, but the Hawaiian bantamweight was unfazed, keeping control of the center of the cage, pressing forward and connecting with the more powerful blows throughout the opening frame.

While the tempo slowed a little in the second, the dynamic did not, as Turcios continued pressing forward, slinging single shots and throwing numerous kicks, finding more success than he did in the first, but never putting Salmon on the defensive. Undeterred by his opponent’s offerings, “Boom Boom” continued to bang home heavy strikes, timing Turcios’ dips and stinging him to the body with more frequency as the second five minutes ticked down.

Sensing he might have been down two rounds on the card, Turcios came out hot to start the third round, backing Salmon up and enjoying his longest stretches of sustained offense of the entire fight, but there was no stopping the Waianae native from countering with force and finding a home for his clean, sharp strikes.

When the final horn sounded, Dana White and several others in attendance rose to their feet saluting the bantamweights for their wildly entertaining battle. In the end, Salmon got the nod, sweeping the scorecards to move to 6-1 and earning a place on the UFC roster. 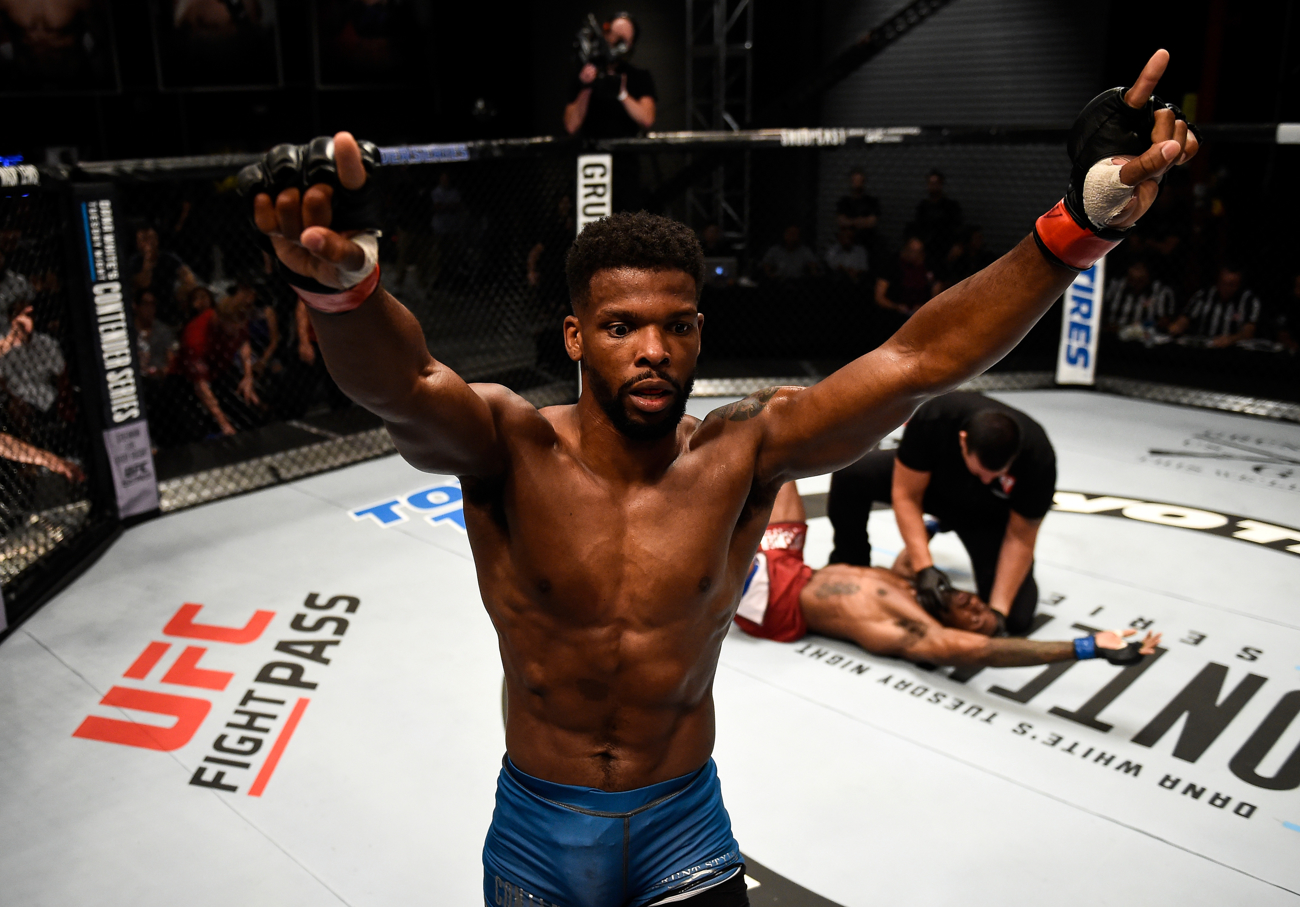 Although he uses the “Kid Dynamite” nickname bestowed upon Mike Tyson by Sports Illustrated several years ago, it was Byrd’s ground game that allowed him to pick up an impressive victory over Pickett on Tuesday evening inside the TUF Gym.

The pair engaged in a tactical tug of war through the opening four minutes, with Byrd opening up with a series of stinging leg kicks that prompted Pickett to search for a takedown. Over the next few minutes, it was a give and take between the middleweight hopefuls, as every attack was met with the correct counter as the two continued searching for way to find an advantage.

That opening came for Byrd late in the round, as he landed in top position out of an explosive scramble, setting in an arm-triangle choke, transitioning to the proper side and tightening his squeeze as the 10-second clackers sounded. While Pickett tried to hold on to the end of the round, Byrd clamped down even more, with referee John McCarthy jumping in five seconds before the end of the round.

With the victory, the Saekson Janjira product improves his record to 8-4, while the North Carolina native Pickett falls to 6-3 with the loss.

Official Result: Charles Byrd by Submission (Arm-Triangle Choke) at 4:55 of Round 1

The flyweights set the tone for the evening – and potentially the series as a whole – in the opener, engaging in an all-action, back-and-forth battle that went right down to the wire.

Sanchez looked to control the striking in the opening frame, coming forward behind combinations, but it was Vazquez who ended up getting the better of things, dropping the Team Jackson-Wink fighter with a two-piece counter off the cage late in the round. When a stunned Sanchez gave up his back, Vazquez pounced, locking in a body triangle as he set about searching for a choke that never materialized.

In the second, Sanchez turned to his grappling, dragging Vazquez’ legs out from under him early in the round, floating to strong positions every time the former Legacy FC standout looked to escape. 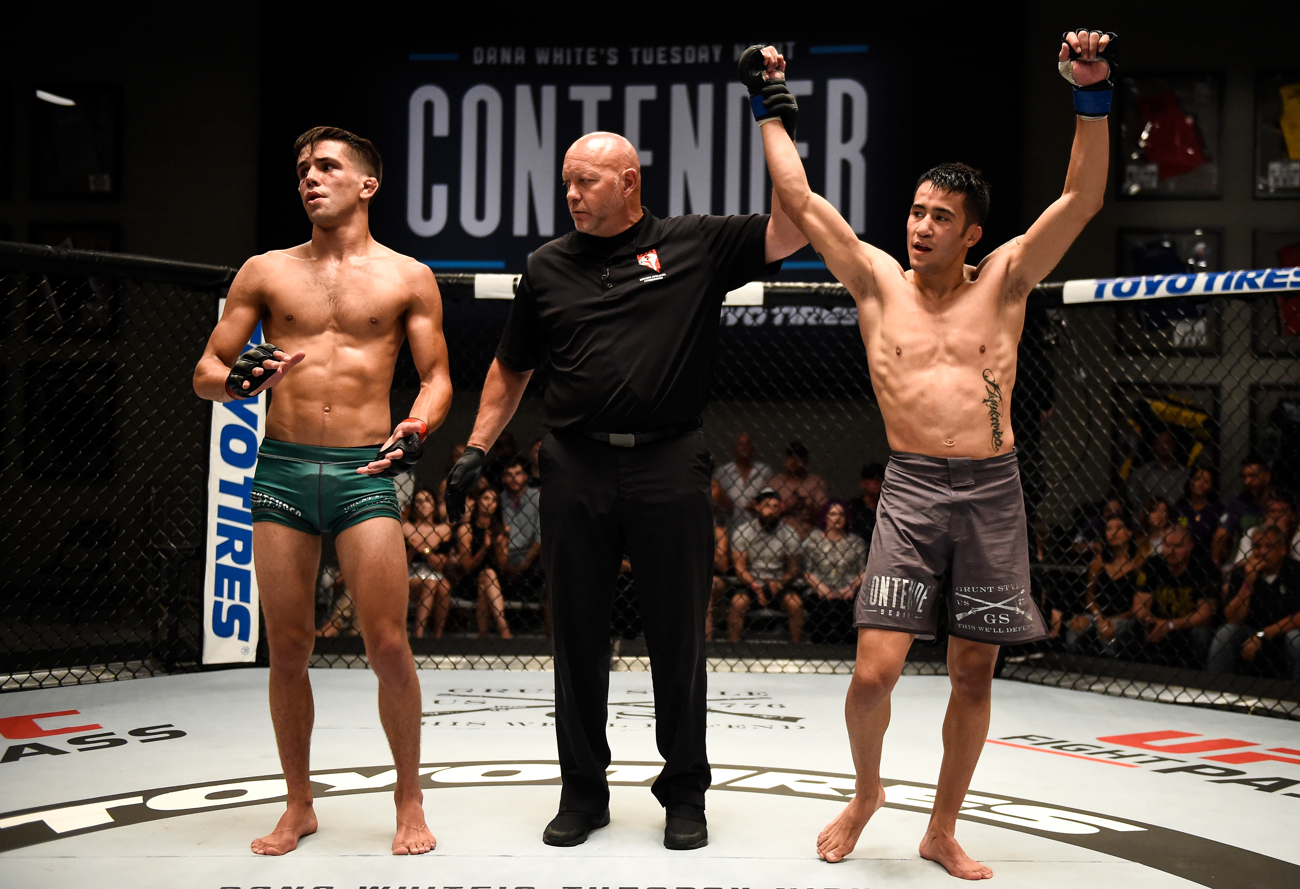 Where Vazquez was unable to really capitalize on his time on Sanchez’ back, the three-time UFC veteran from Albuquerque didn’t make the same mistake, peppering Vazquez with strikes throughout the second.

Even heading into the third, it was anybody’s fight with three minutes left and although Vazquez initiated the clinch, Sanchez was the one to capitalize, scrambling into top position and duplicating the work he put in throughout the second round through to the final horn.

When the nines and tens were tallied, they added up to a victory for Sanchez, who pushes his winning streak to three while potentially taking one step closer to making his return to the Octagon.