Kurt Holobaugh had to smile on April 13. The Amite, Louisiana product had his own fight with Thiago Moises to train for, but as he took a break to watch UFC 236, he got to see a fellow Louisianan win a world title. And he couldn’t be happier for Dustin Poirier.

“I've known Dustin ever since the start of his journey and my journey also,” said Holobaugh. “He started a little earlier than me, but we were on the same local cards in Louisiana back 10, 12 years ago. So it's always pretty cool to see a guy from the same state come up the way he did and now he's a UFC world champion.”

Back then, guys like Holobaugh and Poirier were scrapping every chance they got, all with the dream of one day making it to the big show, where they could get the opportunity to make this a career and get a belt.

“Guys grow up watching the UFC on TV for years and that's their dream,” he said. “When they start fighting on these local shows, that's every fighter's dream, but the reality is, probably 80 percent of those fighters will never make it.” 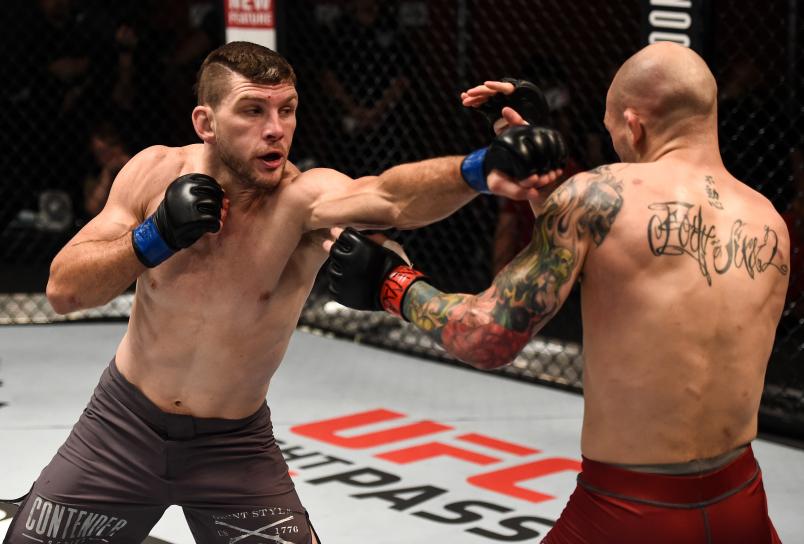 Holobaugh made it, but it wasn’t an easy road. At least not the second time. The first time, Holobaugh raced out to a 9-0 pro record, earning a call to the Strikeforce promotion. He lost his debut to veteran Pat Healy in January 2013, but three months later he was in the UFC, where he lost his second straight, this time to Steven Siler.

By July of that year, he was back on the regional circuit, where the real struggles began. For the next four years, he won a lot more than he lost, but he didn’t get the call back to the Octagon. That didn’t happen until he got on the first season of Dana White’s Tuesday Night Contender Series. And while a win over Matt Bessette in July 2017 was overturned to a no contest due to prohibited use of a pre-fight IV, he was invited back to the UFC, only to lose 2018 bouts to Raoni Barcelos and Shane Burgos.

That’s where it gets interesting, as the Barcelos bout earned Fight of the Night honors and in the Burgos bout, he dropped the New Yorker before getting submitted. So it was another example that there are different kinds of losses. 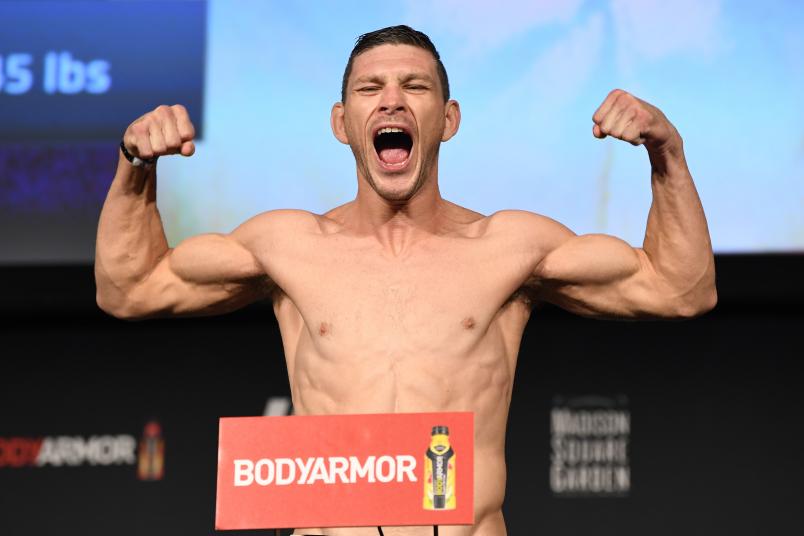 “I think I can take a bunch of positives away from the fights, especially in the first fight with Barcelos,” said the 32-year-old. “Everybody's starting to see how good that guy is, and then you look at Shane Burgos and it's the same thing. His fight with Cub Swanson, he got a close split decision, but that's a good win.”

Now it’s Holobaugh’s turn, and he’s under no illusions about where he’s at heading into Saturday’s bout with Moises.

“I think it's still a must win,” he said. “The UFC doesn't give a shot to many guys with 0-3 or 0-4 records in the UFC. So I still think it's a must win. The performances that I had in those last two fights were pretty good, but all in all I didn't come away with the victories, so we just have to change some things up, not make the mistakes we made in the last two fights and we should be able to pull out the victory in this one.”

Entering a pro MMA fight for the 25th time, Holobaugh is used to life in the fight game and the pressure that goes along with it. What he isn’t too used to is going outside of the U.S. for a fight, with this weekend’s UFC 237 card marking only the second time he’s gone on the road to a foreign country to fight. But he’s not intimidated by being the visitor in Rio de Janeiro.

“I'm trying to embrace it, especially this trip,” he said. “This is the hometown of my coach (Rafael Ellwanger) that he grew up in, so it's good to bring my coach back. He hasn't been able to come out to his hometown very much over the past 10-12 years that he's been in America and Louisiana with us, so it feels good to bring him out and let him see his family and stuff like that and get this big fight also.”

Pretty sneaky, Holobaugh, having a Brazilian coach for a fight in Brazil.

“That's always the plan, to go into hostile territory and try to take a few fans back with me.”

Anyone who has seen Holobaugh fight has likely become a fan, but he knows that to keep his place in the roster, he also has to start putting wins together. And he’s prepared to do just that.

“This is most definitely the year that I'm gonna put it all together,” he said. “I had a bad run in 2018, but anyone can go and check my record and check my history of being a fighter. I've never lost over two fights in a row, and I always come back and hit a big win streak after I lose those two fights. So I feel like that's the time that it is right now and I feel like that's what's about to happen.”

Most fighters will say that, but Holobaugh means it more than most because he’s fighting not just for himself and his family, but for every kid on the local circuit who wants to be where he is. He knows what it takes to get to the UFC, and he’ll never forget what it means to him.

“You're forever gonna be the guy that made it to the UFC,” he said. “I'm forever the guy that's done crazy things with my little small town life that I grew up on. So for me to make it here, it's something I'll hold tight forever. I feel privileged that I'm here, it's everything I've ever thought of, everything I've ever dreamed of, and now it's time to really get in there and take advantage of that.”