Holm Searches for the Sweet Victory

Outside the Octagon is a column from UFC.com editorial director Thomas Gerbasi, who has covered the sport since 2000 and has authored the official UFC encyclopedia and UFC: A Visual History. 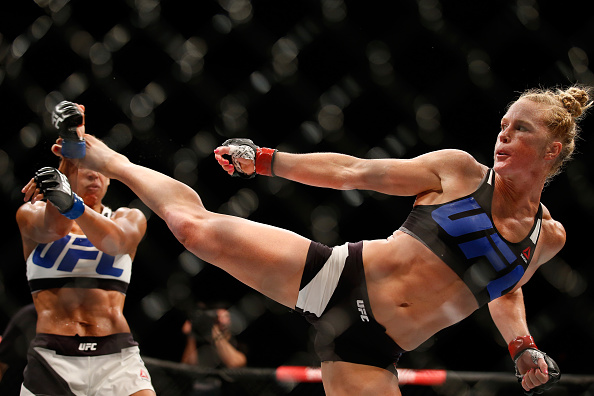 One kick could change everything for Holly Holm.

As “The Preacher’s Daughter” approaches the biggest fight of her career against Ronda Rousey this weekend in Melbourne, Australia, the talk has centered on how Holm can do the impossible and dethrone the juggernaut of the MMA world.

They’re all valid ideas, but the most valid may be the most primal, the one that all combat sports are built on. Hit first, hit fast, hit hard.

Holm was one of the greats in women’s boxing, a multi-division world champion who holds a place in the all-time top ten this scribe put together for the January issue of The Ring magazine that Rousey is featured in. For her to go out and defeat Rousey using a boxing-based attack would be the ultimate revenge for the diehards who have been up in arms about an MMA fighter being on the cover of “The Bible of Boxing.”

But that’s not Holm’s greatest chance of winning. Her chance comes in the first 10 seconds of the fight, usually the time when Rousey is starting to wrap things up, given her most recent wins over Alexis Davis, Cat Zingano and Bethe Correia, which have lasted 16, 14 and 34 seconds, respectively. Rousey is used to getting her way in a fight, and getting it as soon as she wants it.

Holly Holm has been a boxer for a lot longer than she’s been a mixed martial artist, but she started competing as a kickboxer. She has trained with one of the best striking coaches in the business, Mike Winkeljohn, since she was a teenager and the majority of her knockouts in MMA have come by way of her feet and not her fists.

So when Rousey rushes Holm at the start of their fight on Saturday night, Holm’s plan should center on a simple strategy of kill or be killed. Throw a kick hard enough to make a mark on Rousey’s leg, body or head. Fast enough to not get caught by the Olympic bronze medalist in judo. And emphatic enough to stop Rousey in her tracks and realize that she’s in a fight.

It sounds so easy, and it’s not, but if it works, everything changes from there on out. In 12 professional fights and three amateur fights, Rousey has never been hit hard enough to throw her off her game. Before Holm, Sarah Kaufman was the best striker Rousey had ever faced, and she didn’t get a chance to test the then-Strikeforce champion’s chin. Everything else thrown at her were blows of the defensive variety, designed to keep Rousey away, not damage her. In fact, the only time “Rowdy” Ronda has ever been in trouble in a fight has been when Liz Carmouche threatened with a submission at UFC 157 in February of 2013.

Since then, it’s been a one way street for Rousey, straight to the Winner’s Circle. Miesha Tate made it to the third round in their rematch, but there never seemed to be a moment where you thought Rousey might lose. Sara McMann and the aforementioned trio of Davis, Zingano and Correia all were finished in the first round, only Olympic Silver medalist McMann making it past the one-minute mark.

Many believe Holm, 34, will suffer the same fate, citing her lack of UFC experience (two fights), the fact that she went the distance with both her UFC opponents (Raquel Pennington and Marion Reneau), and that, well, Ronda Rousey is Ronda Rousey.

Those folks seem to forget that in her previous athletic life, Holm was the pound-for-pound best in women’s boxing for much of her career, that she defeated two fighters (Christy Martin and Mary Jo Sanders) on that aforementioned all-time top ten list in The Ring, and that in Albuquerque, she was the equivalent of a pro sports franchise for the city. A Holly Holm fight in the ABQ was an event. Not 70,000 seats in Etihad Stadium kind of event, but she does know a little something about dealing with the media crush and performing when all eyes are on her.

So the pre-fight hype isn’t likely to overwhelm her, and facing an opponent Sports Illustrated described as the most dominant athlete in the world shouldn’t faze her either. She’s already crossed that bridge when she faced and beat the last female fighter to grace the cover of SI, Christy Martin, who she nearly shut out over ten rounds in 2005. Holm wasn’t supposed to win that one either.

“I don’t want to say the fight was easy,” Holm told me in 2008. “But the training we went through and the gameplan we put together made the fight easier.  At first, I think I was fighting the legend, Christy Martin; I was fighting the name.  Halfway through the fight I realized that she was just another fighter.”

She probably feels that way about Rousey already, making the fight the only thing that is on the table come Sunday morning in Melbourne. Yes, if Rousey gets a hold of her and sends her on a ride to the canvas, it could be another quick one for the highlight reel. But what if Rousey wants to show off her hands against one of the best to ever do it? And what if Holm lands that kick?

One kick…just one…to rule the world? That would be what Holm once described to me as a sweet victory.

“The only way to really feel good about a victory would be to beat somebody with that much respect,” she said before the first of two victories over Sanders more than seven years ago. “I think that a lot of people want to get the victory, but they kinda want to know they’ll get the victory and not really stretch it too much.  What my dad and I call it is a sweet victory.  When you’ve fought hard and beat a really worthy opponent, that’s a sweet victory and that’s when you feel good about it.”