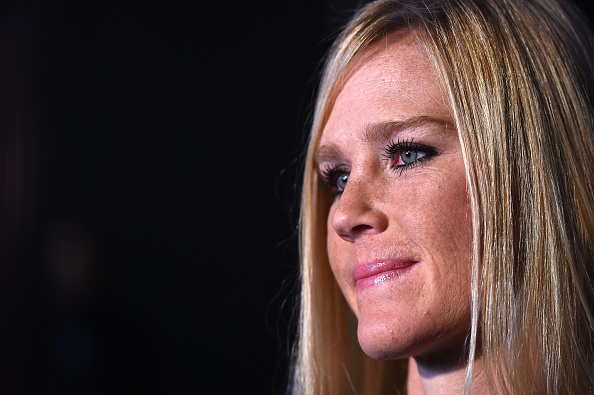 Holly Holm returns to action on June 17 to take on Bethe Correia at Fight Night Singapore" align="center" />
As one of the classiest members of the UFC roster, Holly Holm doesn’t bristle at the question she’s going to hear from now until her Jun. 17 headliner in Singapore against Bethe Correia. But she will be happy to never hear about her three-fight losing streak again.

“Hopefully after this fight we’ll have a whole different set of questions,” she laughs, clearly intent on snapping that streak against Brazil’s “Pitbull” at Singapore Indoor Stadium.

It’s a pivotal fight for the former UFC women’s bantamweight champion as she looks to rebound and get back to the business of chasing world titles.

“They’re heavy on my heart, but I’m just learning from them,” Holm said. “I’m gonna take the things that I didn’t do well and just be better. That’s the only way to go. I have no other choice and I don’t want to just pout about it. It’s something that I think about a lot and something I’m not happy with, but I can only go forward, and that’s what I choose to do.”

After a Hall of Fame boxing career and a run in MMA that saw her soar to the top of the 135-pound weight class, the 35-year-old hit a roadblock after her stirring knockout of Ronda Rousey in November 2015. But her three defeats to Miesha Tate, Valentina Shevchenko and Germaine de Randamie weren’t losses that made the world question whether she still had “it.”

Holm was on her way to a clear points win when she was submitted in the final round by Tate in March 2016. A step on the gas might have allowed her to get the nod against Shevchenko four months later. And in February, many believed she did enough to defeat de Randamie and win the UFC women’s featherweight crown. But in a game of inches, it was not to be.

“I know my last three fights were not losses out of being dominated, and that’s what helps me keep positive at this point,” Holm said. “I felt like I did enough in my last fight, but obviously I know that there are things I could have done more and better. The Shevchenko fight, it was a good fight and close fight, and with Miesha I was winning until I got caught. It would bother me more if I had just been dominated by three different people in three fights. But I do know that I’m competitive with the top fighters, and I do believe I can beat these girls, I really do. I have that confidence in myself – not in any cocky way, just that I really do believe that I have the ability to do it.”

She does. Her resume proves it, and it also shows that when she was at her lowest professionally, she roared back with a defining performance. That was back in 2011, when the Albuquerque native was knocked out by Anne Sophie Mathis at a time when she was boxing’s pound-for-pound queen. The naysayers flew out of the woodwork after the bout, but Holm closed ranks, chased an immediate rematch, and avenged that loss to Mathis six months later. 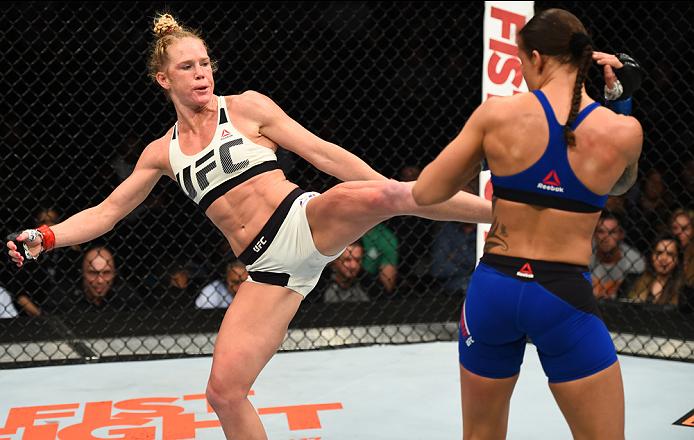 “Honestly, at that point I just kind of ignored everybody,” she said of the time between the two fights against Mathis. “A lot of people didn’t expect a rematch or think I could do it and I just had to ignore everybody outside of the gym, ignore the negativity and just focus with my team, and that’s what I did. And that’s what I need to do now. Don’t get me wrong, it’s a different situation right now and it’s not that people are being negative. A lot of people are actually being positive. They thought I won the last fight, but I’m still coming off three losses and I have to be able to still believe in myself. That’s what it comes down to, that’s what I had to do before and what I need to do now.”

Holly Holm will never be someone described as fired up when it comes to an upcoming fight. That’s just not how she’s built. She’s not a trash talker, won’t get in an opponent’s face at weigh-ins or mean mug a foe in the Octagon. But she is ready to take on Bethe Correia in June, and she can’t wait to have her hand raised again.

“I’m fighting as if I’m fighting the toughest girl out there,” she said. “I’m training for the best and I know that she’s still very headstrong and very confident in herself and she’s a tough fighter, so I’m training as if this is the biggest fight of my life. I want to perform the best I can and I really want to dominate. I don’t want to see a wishy-washy close fight. I want to make a statement.”