Holm prepares for each fight as if it's her last

There is something uniquely appealing about speaking with Holly Holm. In an age where so many competitors use a lot of words to say very little, the 36-year-old Albuquerque native stands apart as someone who chooses her words carefully and makes sure they count.

Talking to Holm about her career, her state of mind or her upcoming fight with Cris Cyborg for the UFC women’s featherweight title isn’t some cliché-filled back-and-forth where both parties are desperate to get it over with. Instead, it’s a chance to get to know a little more about what makes one of the most successful and accomplished female sports competitors of all time tick.

Speaking last week on the UFC 219 media conference call, Holm mentioned that she approaches each fight as if it might be her last, something that might sound odd coming from an athlete a little over a week removed from a world title fight. When I asked about the origins of her approach and its impact on her preparations, Holm offered an honest perspective about taking in each and every moment, complete with an atypical, but decidedly Holly Holm example of what she means.

“I remember one of the old wrestling coaches saying that,” she said, explaining the genesis of her “each fight could be my last” approach. “‘Don’t look too far ahead because this opportunity is going to pass you and you’re not going to make the most of it and you’re not promised another opportunity.’

you’re not promised another opportunity

“What if you don’t do well and they don’t want to give you another opportunity? What if you’re injured? What if you can’t fight anymore? If you want to take it even deeper, our lives could be over tomorrow, so let’s make the most of today and what’s in front of us and we’ll just go from there.

“I really want to embrace the now,” said Holm, who halted a three-fight slide with a stunning third-round knockout of Bethe Correia back in June. “I was training the other night and thinking about the fight and we were going over some of the positions in the fight that can be scary positions to be in and can be vulnerable positions and I was getting emotional and told my coaches, ‘I’m not sad, I’m just emotional because I’m taking this in. I might be crying while we do this, but I’m just taking this in.’”

The former bantamweight champion laughed, acknowledging that crying during a training session is something that happens from time to time as she’s preparing to step into the cage.

Another frequent pre-fight occurrence for Holm is being asked questions about her championship victory over Ronda Rousey at UFC 193.
MORE FROM UFC 219: The Watch List | Cyborg vs Holm - One Crazy Fight | Free Fight - Holm vs Correia | Pre-order UFC 219 Digitally

More than two years after dethroning the undefeated crossover superstar in Melbourne, Australia, Holm can’t prepare to step into the cage without working her way through myriad questions about her most high profile performance, especially now that she’s on the brink of sharing the Octagon with another dominant force.

It could certainly grow tiresome, but like everything, Holm is able to keep it all in perspective.

“It’s definitely talked about a lot,” said Holm, “but I have to take it for what it is. The reason people talk about it is because Ronda was so dominant and I was the one to take her down, so I understand why people still talk about it.

“I guess I can’t really be mad that they’re talking about it because that’s what I wanted to do,” she added with a laugh. “It was a memorable fight and I kind of wanted to make that big of an impression.”

She hopes to do the same on Saturday night in Las Vegas when she shares the cage with Cyborg, the reigning, 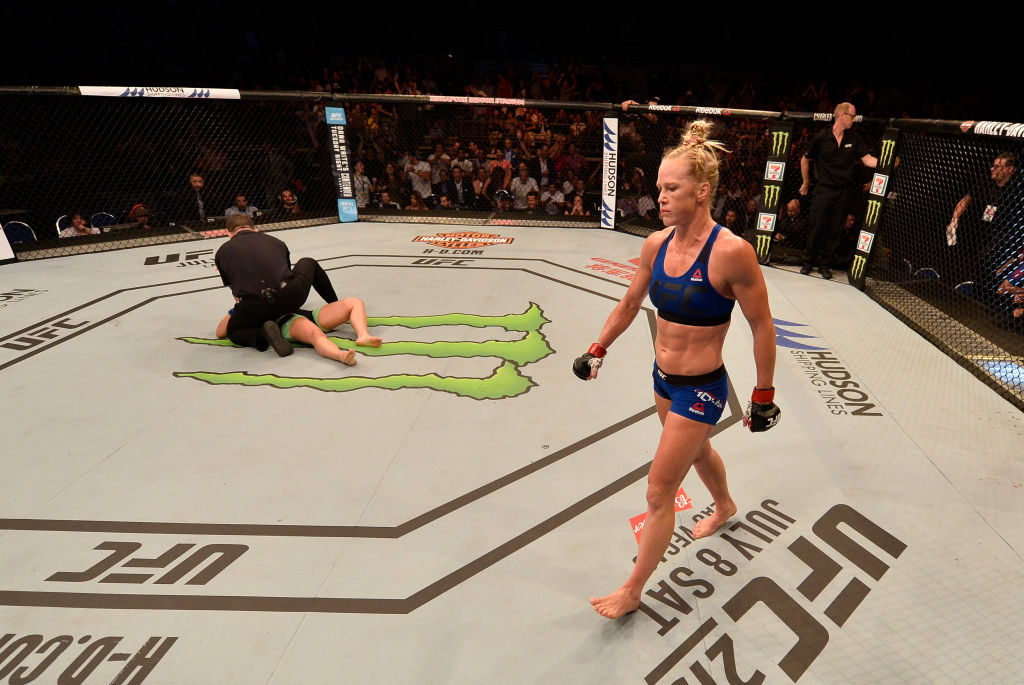 While most have asked what it would be like to topple another iconic competitor and what that would mean for her legacy as she prepares for her UFC 219 showdown with Cyborg, Holm has been more focused on pulling from the wealth of experience she has preparing for major bouts, both in boxing and mixed martial arts, as the fight draws closer.

That very much includes her experiences in the lead-up to the last time she made history in the Octagon.

“Each experience in life helps you to be prepared for the next, so absolutely having a big fight like that and going in as the underdog taking on this undefeated fighter is a big moment and I definitely feel like it helps prepare for that,” said Holm of her championship experience, in particular her bout with Rousey.

“The mental aspect of the game is the biggest part, the hardest part and you can really let your nerves get the better of you, so I think having that experience helps to just let the nerves be there – because they’re going to be there – but embrace them and let it be for something good; turn it into positive energy.”

Just as Holm has needed to find a way to put the constant questions about her fight with Rousey into perspective, she has done the same in regards to this highly anticipated matchup with Cyborg that is finally coming to a head.

In some ways, she’s eager to put it behind her and move on to the next challenge, but not to the point that she loses sight of the formidable task at hand.

“I always look forward to being able to kind of just mentally let go and not be thinking about that deadline for sure,” said Holm, “but I don’t get so excited for it that I lose where I’m at today and that I still have this work ahead of me, because if the fight was over and it was a loss, I’m going to wish that I could do it all over again.”

Just like the training session that triggered her emotions, Holm is very much focused on the moment at hand, taking it all in and making sure she makes the most of it.

And if she does, expect to see more tears.