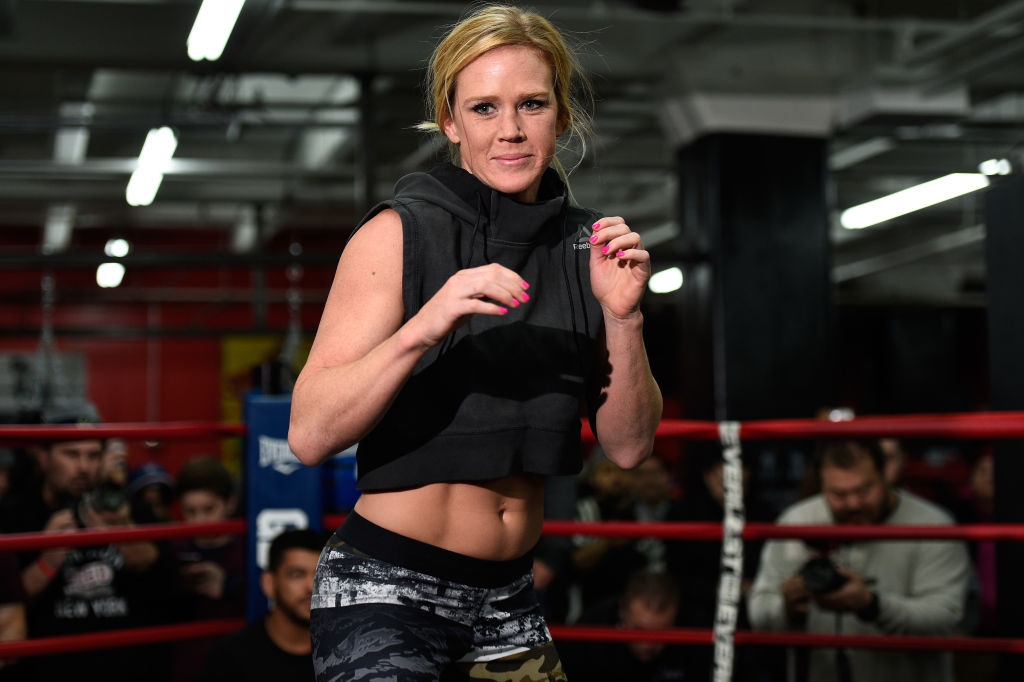 Holly Holm is ready for the questions. In a way, she welcomes them, even though she’s not particularly concerned about the think pieces, interviews and features that will be crafted out of her responses, most of which will focus on the same, obvious narrative.

Less than two years removed from her thrilling knockout victory over Ronda Rousey at UFC 193, Holm is in the midst of the longest losing streak of her career – a three-fight skid that has taken her from the top of the women’s bantamweight division to what many are saying is a must-win fight against Bethe Correia in the main event of Saturday’s UFC Fight Night event at Singapore Indoor Stadium.

She’s prepared to give thoughtful, detailed answers to every inquiry about her mental state, her training camp and what she felt has gone wrong over her last three outings. She’s too polite to be gruff and dismissive. She’s also a cut-and-dry realist, which means she’s already tackled all the tough questions about her recent struggles and what it all means. So she’s already moved on to what matters most – her opportunity to get back into the win column this weekend against Correia.

“I think a lot of times in building up to the fight – no offense to the media at all,” Holm says, sticking the jab before coming with the cross. “Our mindset is stuck on just wanting to win the fight. Our job is to fight. Your job is to cover it. When it comes to the fight, we’re focused on our job, which is to fight.

“That being said, I think there is also kind of a focus that comes in with it,” she says of the string of interviews that precedes each appearance in the Octagon. “When these last interviews come in, it’s like, ‘The reason I’m doing them is because the fight’s close’ and I feel like it’s something that makes it even more real. It’s the next step.

“Here we are talking about it. Why? Because I’m fighting (this weekend) and it makes it real. You can spend part of your day pretending like you’re not stressed out, but I know it’s coming and I feel like it’s better just to face it, embrace it and that’s what I’m doing.”

*let's out sudden exhale after video ends because you realized you were holding your breath the whole time* #UFCSingapore pic.twitter.com/q9j9G57jJt
— UFC (@ufc) June 12, 2017

That “just face it” approach isn’t restricted to media obligations either.

The Albuquerque native follows the same blueprint when it comes to processing her fights, eschewing any “woe is me” or “coulda, woulda, shoulda” moments in favor of determining what went wrong and how to fix it before returning to the gym on a mission to do just that.

“I hate to lose,” she says, just uttering the word making her voice twist in a way that conjures images of her shuddering simply by saying it. “I hate it. It’s sour. It sits in my gut and I hate it, so when a loss happens, I guess I’m more of a realist – okay, that’s a loss; let’s face it, get better and get back to a win.

“I don’t want to sit there and sulk. I definitely want to be real because I know the only way to get better is to face whatever I did wrong and come back better; learn from it. The sooner I face it, the sooner I can start learning and getting better from it.

“That’s where I’m at all the time,” she adds. “I want to keep getting better because if I sit at home, that does me no good.”

As great as that approach sounds, turning the page and moving on isn’t always so simple.

“I think in my last couple fights it was sitting pretty thick in my stomach,” Holm says of the sour feeling brought on by defeat that lingered following her loss to Miesha Tate and became worse after her bout with Valentina Shevchenko. “But I’ve realized that I was leaving my mindset there – in a losing, depressed mindset – and that wasn’t good for me. The negativity there can affect performance, so I really kind of worked on letting go the pressure of ‘Oh my gosh, I’ve gotta win; I’ve gotta win.’”

Went for a little evening run here in Singapore and found myself running by an orchestra as I got to watch the sunset on the city. I can't help but feel happy and blessed.
A post shared by Holly Holm (@hollyholm) on Jun 11, 2017 at 5:34am PDT

Heading into this weekend’s clash with the feisty Brazilian former title challenger, the 35-year-old Holm is reinvigorated – appreciative of the opportunity in front of her and eager to once again cross the threshold into the UFC cage and deliver the type of performance she knows she is capable of delivering.

“I always feel really blessed to have the opportunity,” she says. “I know that I have some losses on my record right now, but I know that I am better than that shows and I know the fights have been more competitive than just saying, ‘Oh, you’re coming off three losses.’

“I feel like I have a lot that I still have to show. I still love my job. I still love to fight. I love this sport and I’m just excited to be able to go out there and be able to do what I love to do. I’m getting in there to fight, so I better go in there with every intention of winning, otherwise what am I doing in there?”

She laughs, though it’s an important question and clearly one she’s asked herself before. This time, however, it seems like the former champion has the answers.

“I definitely feel focused,” she adds. “I feel prepared. I feel capable and I’m in a very positive mindset right now. I’ve trained hard, I know I’m capable, I’m going to move forward and I’m ready for a win.”