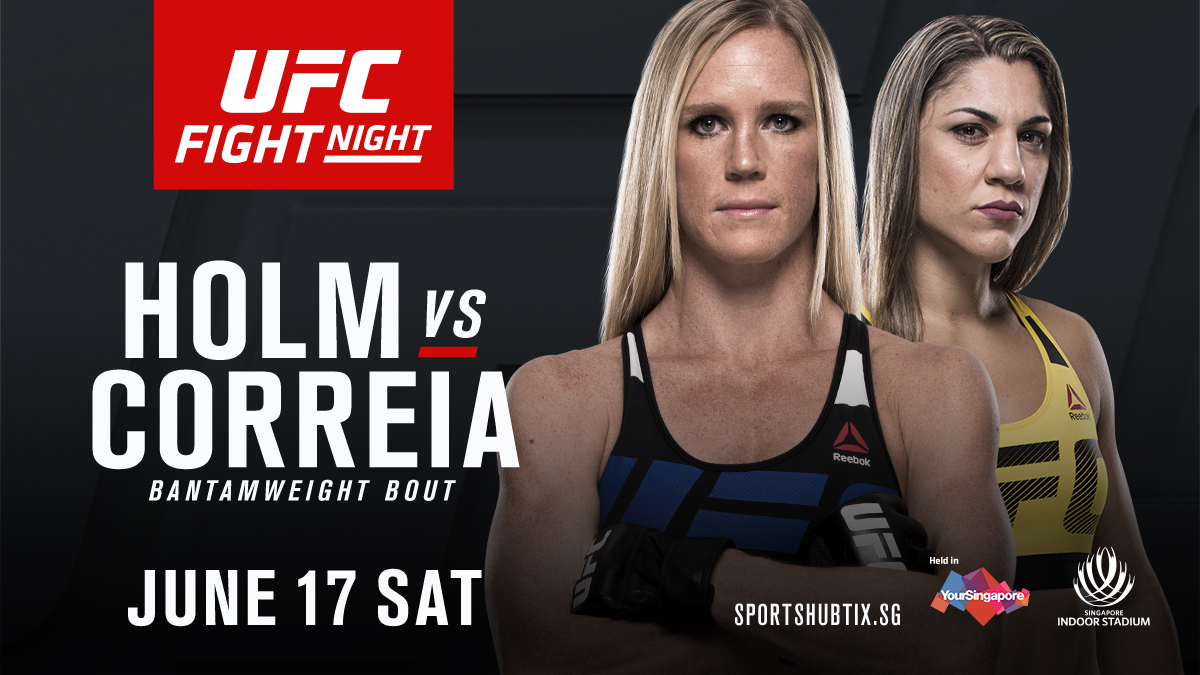 Decorated kickboxer and former bantamweight champion Holly “The Preacher's Daughter” Holm (10-3-0, fighting out of Albuquerque, New Mexico, USA) will face aggressive Brazilian striker Bethe “Pitbull” Correia (10-2-1, fighting out of Campina Grande, Paraiba Brazil) in a five-round bantamweight showdown. Holm shot to fame when she dethroned dominant mixed martial arts legend “Rowdy” Ronda Rousey. The ‘kick heard around the world’ at UFC 193 was watched by a crowd of over 56,000 and made Holm an instant household name. After winning an impressive 10 straight fights with seven knockout finishes through 2015, Holm will look to bring back the heat in Singapore.

Meanwhile, Correia, a veteran who fell to Rousey when she challenged for the title in August 2015, returns to the Octagon® following a majority draw against Marion Reneau in March. A well rounded fighter who is absolutely not afraid to stand and trade, Correia’s bout against Jessamyn Duke ended with a significant strike differential of over 100 to 55.

For the latest card information or current fight news, please visit UFC.com. All bouts are subject to change.

Tickets for UFC FIGHT NIGHT® SINGAPORE: HOLM vs. CORREIA will go on sale Thursday, April 13 at 10 a.m. and are priced at S$378, S$248, S$128, S$98, and S$58 (prices do not include applicable service charges and fees). Tickets will be available for purchase online at www.sportshubtix.sg, the Sports Hub Tix Box Office, Sports Hub Tix Outlets at all SingPost locations, and by calling Sports Hub Tix Hotline at +65 3158 7888.  Early bird promotions will be available from April 13-27.