The moment the lights started to go out late in the fifth round against Miesha Tate at UFC 196, Holly Holm – rapidly losing consciousness, along with her UFC bantamweight title – found herself on the other end of things.

Just four short months earlier, Holm was on top of the world after putting an end to the dominant championship reign of Ronda Rousey in devastating knockout fashion.

But after Tate choked out Holm to claim the championship, she was the one left lying in the Octagon.

Clearly, Holm is disappointed that she lost her belt. Nobody wants to drop the title one fight after winning it but in keeping with her businesslike manner, Holm has moved on. Next up is Valentina Shevchenko in the main event of Fight Night Chicago, and Holm is calling the Kyrgyzstan product the toughest fight to date in her MMA career.

“She’s no joke,” Holm said. “She’s got a lot of experience in her standup. She’s been in every situation you could imagine. She is a very well-rounded fighter, good on her feet, good in the clinch and very strong. There are a lot of things I have to look out for in this fight.” 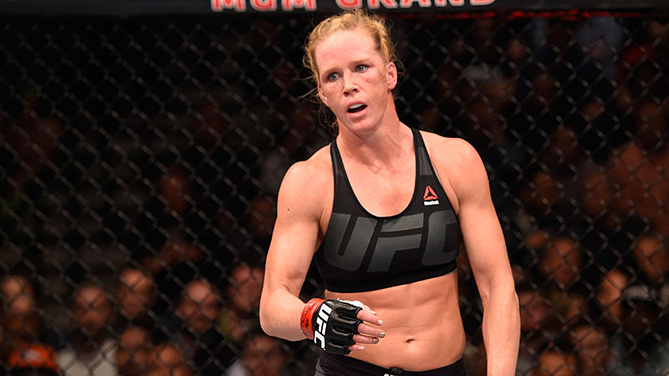 Back at home after the loss to Tate, surrounded by teammates and coaches at the famed Jackson/Winklejohn gym in Albuquerque, New Mexico, Holm continued working every aspect of her game to prepare for Shevchenko.

Since making the move from boxing to MMA, Holm has always believed that a steady diet of every discipline is the best way to prepare to fight in the Octagon. Even before going against Tate, whom many believed held the obvious advantage on the mat, Holm believed she was prepared if the fight went there.

“I was already working on my ground game before the last fight. And yes, it ended the way it ended, but it’s just one of those things that it just made me more motivated to put more time into it,” Holm said. “I want to always be improving and getting better. I want to keep pushing forward.”

Whether moving forward or looking back, Holm is likely destined to be connected to Rousey. The iconic moment the two shared at UFC 193 will be featured on highlight reels for years to come.

Holm did a Fight Week Facebook chat with fans on Wednesday, and the first question was about Rousey and if “The Preacher’s Daughter” wants to rematch her down the line. She doesn’t mind talking about Rousey even if her focus now is on Shevchenko.

“I don’t mind people asking me about it,” Holm said. “They’re asking obviously because it made waves. That’s why they’re talking about it so I don’t mind it at all. But I definitely don’t focus on that being my next fight because I have these other opportunities coming up.”

The opportunity at hand is a five-round fight with Shevchenko that could position the winner nicely for a title shot against new champion Amanda Nunes.

Shevchecnko is a Muay Thai fighter who has secured five of her 10 takedown attempts in two UFC fights. She’s an elite striker and should test Holm in-close and if the fight goes to the ground.

Holm is prepared for whatever happens.

“We’ve been working a lot with the clinch,” Holm said. “Coming from a Muay Thai background they work on a lot of clinch as well.

“But really I’ve done all of it. We’ve worked on standup; worked on being aggressive and being defensive, being in the clinch and on the ground. She’s one of those fighters who is going to be ready wherever it goes.”