Holly Holm: 'You're Not Going To Get Past Me'

Former UFC Bantamweight Champion Holly Holm Wants To Prove That She Isn't A Stepping Stone For Rising Contenders And That She's Still Climbing Back To The Belt.
By E. Spencer Kyte, on Twitter @SpencerKyte • May. 18, 2022

Holly Holm never wanted to wait this long between fights.

The last time the former champion stepped into the Octagon was October 4, 2020, on UFC Fight Island, where she defeated Irene Aldana over five rounds to register her second win of the year. A date last May with current champ Julianna Pena was scuttled when Holm was diagnosed with hydronephrosis, and then she was forced to withdraw from a bout against Norma Dumont in October after suffering a knee injury.

“I wanted to fight, but whatever was happening, I just had to deal with it,” Holm said Wednesday morning, ahead of her return to action opposite Ketlen Vieira in the main event of Saturday’s fight card at the UFC APEX. “I’ve been pretty fortunate in that yes, I’ve had some injuries that have pulled me out of fights in my career, but very few, and it’s kind of been over the last few years.

“I wanted to get back in there, but sometimes you have to sit down and deal with what is right in front of you.”

More so than dealing with the knee injury, addressing her kidney ailment has been a major sense of relief and renewed energy for Holm, who admitted that fight week used to be marked by increased painful stretches as she tried to water-load and cut weight.

“I’d be telling my coaches, ‘I need to go lay down. I just need to sleep for a while; my pain is back.’ It was almost like a normal thing,” explained the 40-year-old standout. “My kidney couldn’t drain all the water I was drinking — it was pinched off and holding all of it — but even on regular days, I would be holding a lot of water, not flushing right, feeling sluggish.”

Now sporting a clean bill of health and a kidney that is functioning at its maximum capacity, Holm is eager to return to action and continue on her quest to reclaim the bantamweight title she previously held and add to her already impressive resume inside the cage.

One thing that has given her an added dose of motivation — not that she was ever lacking in that department — was her induction into the International Boxing Hall of Fame as part of the Class of 2022.

“I already was motivated and wanted to keep fighting, but there are little things in life that give you that extra push and that extra motivation, extra passion,” said Holm, noting the well-deserved honor certainly had that type of impact. “Your first title fight you ever have is the first time you’re going to go 10 rounds, the first time you’re fighting for the title — that is a feeling of excitement and nervousness on another level than you’ve ever had before.

Holm arrives in Las Vegas for this weekend’s showdown with Vieira in an interesting place in her career — clearly established as one of the top contenders in the 135-pound weight class, but no longer the No. 1 contender. She’s a former champion on a two-fight winning streak and a permanent threat in the division, but also likely viewed by many — including Vieira — as the last hurdle to clear before landing their own a championship opportunity.

While she understands that point of view, Holm has no interest in playing that role for Vieira or anyone else.

“I feel that anybody fighting me right now thinks, ‘If I get through Holly, maybe I can get to the belt,’” said Holm, whose only career non-title loss came at the hands of current flyweight queen Valentina Shevchenko. “That’s where I’m at right now, but I’m not here just to be that person you need to get past; I’m here to show them you’re not going to get past me.” 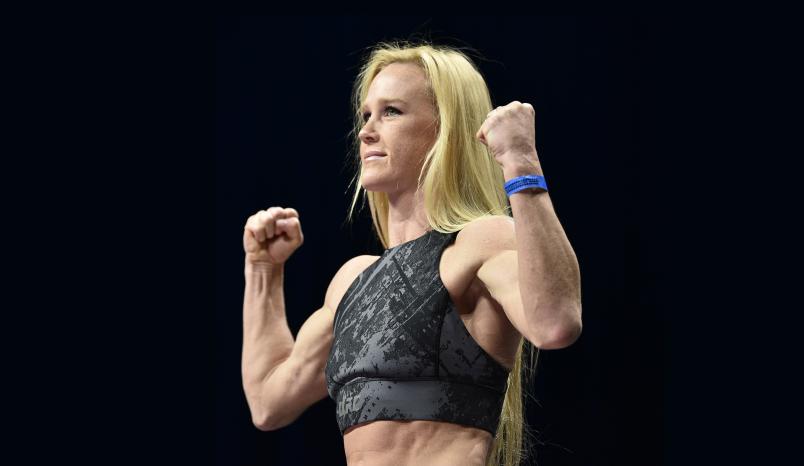 Holly Holm poses on the scale during the UFC 246 weigh-in at Park Theater at Park MGM on January 17, 2020 in Las Vegas, Nevada. (Photo by Chris Unger/Zuffa LLC)

Getting back to the top herself has been Holm’s mission since she was dethroned by Miesha Tate at UFC 196, and it has been a continuous process of improving in the gym, implementing those new skills in the Octagon, and facing the toughest competition possible at every turn.

After closing out her rookie year in the UFC with one of the most shocking upsets of all time over Ronda Rousey, the former three-division boxing champion and two-division MMA title threat has gone just 4-5 in her past nine fights, with each of those setbacks coming against women that have worn (or still wear) UFC gold.

All but one of those contests was close, and along the way, Holm has continued adding to her arsenal, working to become the complete martial artist she set out to become when she first opted to hang up her boxing gloves and commit to a fighting career inside the cage.

“Then I started getting better with my clinch work and my takedowns and stuff like that, and not only focusing on that, but implementing it into my game plan to where…”

She paused, finding the right words to describe her desires.

“I want to be unpredictable,” she said sharply. “I didn’t come to MMA to box in a cage; I came because I wanted to make a legacy in MMA as a full martial artist, and so I feel like I still have things I want to accomplish to prove that. And I want to show that, not just to everybody else, but also to myself.

“I want to keep learning and progressing and winning in any kind of way in MMA.”

And she feels like Saturday’s engagement with the talented Vieira is a perfect platform for her to show the totality of her game and take another step towards challenging for championship gold once again.

“Outside of the champ and the No. 1 ranked (fighter), I honestly think she is the toughest stylistic fight for me right now,” she said of Vieira, who enters off a unanimous decision win over Tate last November and sporting a 12-2 record overall. “I fear everything she’s got.

“She throws to knock you out. She’s got her takedowns, her top pressure. She’s got a well-rounded game and I’m aware of it. I’m going to be better wherever the fight goes, no matter what, but I need to be on my game.”

Happy, healthy, and finally back after a forced layoff that was “way too long,” don’t be surprised if we see the best version of Holly Holm yet this weekend.