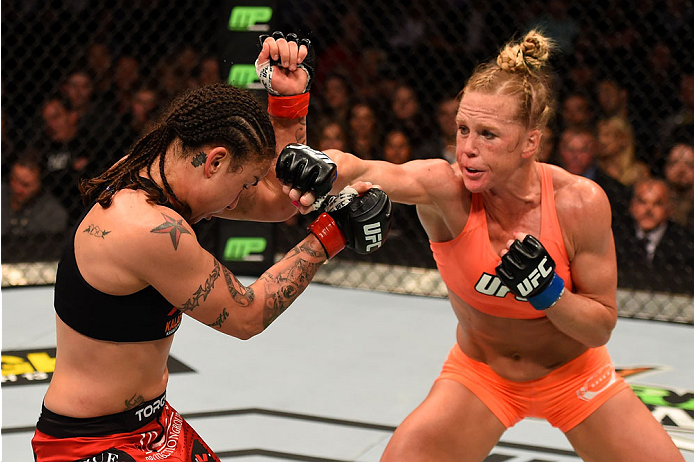 It’s easy to become preoccupied pontificating on a fighter’s motivation heading into a bout. Any bout. The belt could be on the line, they could be one impressive performance away from battling for the belt, they’re bouncing back from a loss or trying to keep a streak alive. With one’s most important fight always being their next one, a fighter makes the walk to win.

It’s that simple for “The Preacher’s Daughter.” Whether she was walking out to a ring for a boxing world title or to the Octagon to keep her pro MMA record unblemished, Holm wants victory.

“I want to win this fight whether it’s for a title or not,” Holm said. “I have had a couple of fights in boxing that weren’t for the title, were 10-round fights, were big names and that win to me was just as important, if not more important, whether the title was there or not. The belt to me is just there. I want to win regardless. The belt in the UFC is the fact that you beat everybody and that’s the victory. I want the victory. The belt means victory. I don’t want the belt to want the belt. I want to win to know that I’ve challenged myself and I fought my best, and if you win the belt then that’s awesome. It’s the victory that I want, not necessarily the belt.”

The 33-year-old with a perfect 8-0 pro MMA record - as well as a litany of championship belts from her previous life as a 33-2-3 pro boxer - made her highly-anticipated Octagon debut at UFC 184 with a split-decision win over the always tough Raquel Pennington. The term “highly-anticipated” is oft overused, but there was a multitude of articles a good year in advance hyping Holm’s Octagon entrance, which actually pre-dated her UFC signing. Before she even had a contract, Holm was being sized up in fight fans’ heads as an opponent for current UFC women’s bantamweight champ Ronda Rousey.

Add to that drama that the Albuquerque, New Mexico native broke her arm in her fifth-round TKO win over Juliana Werner in April 2014, which was Holm’s final fight outside of the UFC. Later that year, Holm suffered a herniated disc in her neck while preparing for Pennington that pushed their scheduled bout from December to a co-main event slot in February. The pressure from high expectations is one thing, but Holm had to overcome back-to-back injuries and nearly a year on the shelf in her most publicized scrap to date, which was another headache entirely.

“I had never had that much time before,” Holm said. “Never. It wasn’t necessarily the time off because I was training, but it was more I had to get in there and believe in my strength. Believe everything was whole and ready to go. In the fight, I was thinking, ‘We’ll just go and see what happens.’ Something was going to happen whether we’re stressing about it or not, so let’s just go. It’s always good to just get that first fight behind you after you have had a bad injury, but I have never had that before.”

As for the Octagon action itself, Holm outstruck Pennington for three rounds while stuffing all of The Ultimate Fighter 18 alum’s takedown attempts. “I felt confident with the win, but I wasn’t 100% happy with the performance and I think I’m capable of more,” Holm who had finished six of her previous seven pro fights, said. Overall, the gritty back-and-forth tangle was added experience for the stand-up specialist, who is tirelessly focused on improving her MMA game everywhere.

Up next, Holm will head to San Diego for a clash with surging talent Marion Reneau at UFC Fight Night: Mir vs. Duffee. Earlier this year, “The Belizean Bruiser” went from unknown to UFC contender by earning a dominant unanimous decision win over Alexis Dufresne in her Octagon debut at UFC 182 and then securing a Performance of the Night triangle choke over Jessica Andrade a little over a month later. The 38-year-old BJJ brown belt is wasting no time climbing the ranks and taking a big step-up in competition with The Preacher’s Daughter.

In preparation for Reneau, Holm is busy training with the only team she’s ever needed to know, the world renowned Jackson-Winkeljohn squad. “I could go on and on about how blessed I am with great training partners and great coaches,” said Holm, who began her journey as a tried-and-true protégé of coach Mike Winkeljohn in kickboxing way back in 2001. Since then, Holm has grown along with the team and has been a fixture in the unparalleled success of the gym alongside such notable teammates as Jon Dodson, Carlos Condit, Donald Cerrone, Andrei Arlovski and former UFC light heavyweight champion Jon Jones, to name a few.

“The more your team wins, the more unstoppable you feel,” Holm said. “We’re obviously learning from the best because it’s working. Our teammates are getting in there and they’re doing well. I feel like that does bring a lot of confidence. When you watch your teammates fight and do well against a very tough opponent, you think, ‘Yeah, that’s the hard training and I’m doing that with them and we’re on that rise together.’ It’s just a great, positive feel. I feel like anybody will go beyond what they think they’re capable of when they’re surrounded by positive thought and that confidence, for sure.”

On July 15 in San Diego, Holm will aim to stay unbeaten as he takes on Reneau. “Hopefully, in this fight I will show more than I did in my last fight,” Holm said. “Regardless, I always feel pressure because I always want to do better and prove more.”