Make sure to check in daily for blog posts on Holly Holm - the No. 1 contender and title challenger to champion Ronda Rousey at UFC 193.

When title challenger Holly Holm stands across the Octagon from champion Ronda Rousey on Saturday night, it won’t be the first time she’s been the massive underdog.

Ten years ago, Holm found herself in almost the exact same situation when she stepped in the ring with women’s boxing trailblazer Christy Martin.

“I had 12 fights and Christy had over 40-some victories. She had fought on the undercard of Mike Tyson, been on the cover of Sports Illustrated and was decorated – she was kind of the pioneer of women’s boxing,” Holm told UFC.com on Wednesday afternoon.

Friends and family members kept asking Holm if she was crazy. “You really think you can do this?” they asked.

But Holm was on her way to becoming one of the greatest women’s boxers of all time. Her father used to tell her that everybody has a fighter in them, and on that day, against Martin, Holm showed the world how great a fighter she had become.

“It was probably one of the easiest fights I’ve ever had physically. Mentally leading up, it was a struggle – not a struggle, just emotional and intense,” Holm said. “I think one judge maybe gave her two rounds, and the rest – I went in there and cleaned house – and easily.”

Far removed from her boxing career, Holm now faces an even greater challenge in her new life as an MMA fighter: beating Rousey, the greatest women’s fighter who has ever lived.

Rousey is 12-0 and has finished every opponent she’s faced. She doesn’t waste time and as her complete arsenal has evolved, “Rowdy” has become even more impossible to conquer. 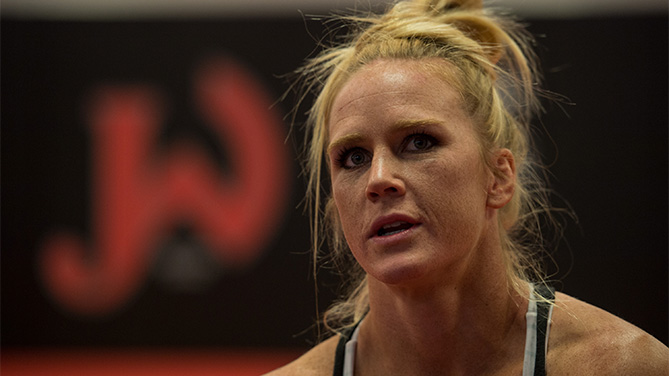 The evolution of Rousey, which has led to the #RouseyRevolution that is sweeping the sports landscape, has not been lost on Holm.

“I don’t overlook anything she does. I’m not going to get in there thinking, ‘As long as we’re standing I’m fine,’ because she has improved a lot in her standup,” Holm said. “She obviously has three knockouts on her record for a reason. She has strength and power.”

But “The Preacher’s Daughter” has delivered as the long shot before, and she’s planning to shock the world again at UFC 193.

“I am a different fighter and this is going to be a different fight that you’re going to see,” Holm said. “ I am aware that she’s gotten better at her standup. But I think what a lot of people are underestimating is that I have grown as an MMA fighter as well.

“I’m not just a boxer. If I planned on just boxing I would have stayed in boxing.”