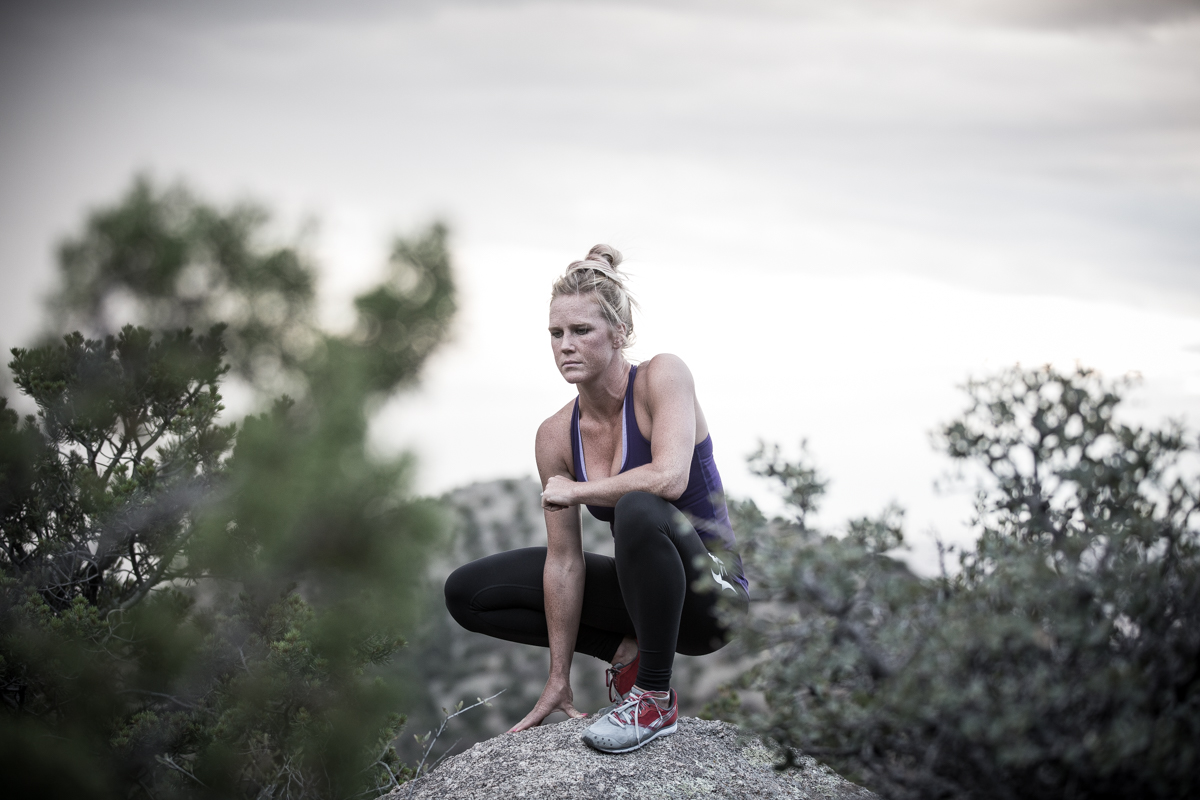 After Ronda Rousey finished Alexis Davis in 16 seconds last Saturday night in the co-main event of UFC 175 in Las Vegas, some wondered if there was anyone out there to seriously challenge the unbeaten women’s bantamweight champion.

Yet less than a week later, things just got a whole lot more interesting at 135 pounds with the Thursday signing of Albuquerque native Holly Holm.

If you’re wondering why, the 7-0 (six knockouts) record held by “The Preacher’s Daughter” is reason enough, but it’s Holm’s previous stint in combat sports as a multiple-time world boxing champion and the sweet science’s longtime pound-for-pound queen that has fight fans more than excited for her UFC debut later this year.

“I figured it would blow up a little bit just because there’s been so much anticipation and hype around it already,” said Holm. “But maybe not to the extent that it did. I’ve had Twitter for a year, and I doubled my followers in three hours. (Laughs) I didn’t expect that.”

Welcome to the UFC, Holly.

Unbeaten in an MMA career that began in 2011 but didn’t become a full-time endeavor until 2013, when she retired from boxing after a May win over Mary McGee. Just after making her announcement that she was leaving boxing, Holm told me “my heart is somewhere else, and I’m listening to it.”

She meant it too, because it wasn’t like she left the sport on the way out. When Holm retired, she did so with a 33-2-3 record, two world titles at 140 pounds, and recognition as one of the top female boxers ever, with her only competition for the top spot on the pound-for-pound list over the last few years being Norway’s Cecilia Braekhus. But mixed martial arts, which she learned with some of the best fighters and coaches on the planet at the Jackson / Winkeljohn MMA gym in New Mexico, had become her true love. A little over a year later, does she miss boxing at all?

“I don’t,” she said. “I loved it for all the years I did it, but I really don’t have the desire to do it anymore, which makes me even more happy about my decision to go with MMA. I went to some boxing fights and I really enjoyed watching them, but I just kept thinking ‘I’m so glad that’s not me anymore.’ (Laughs) I did it a long time and I wanted to make sure I did it as long as I really loved it, and that was that. I’m happy where I’m at, and I’ll always have love for boxing, my career, and the people who supported me, but it’s fun to be part of something new, learn something new, and be on a new path. It’s exciting, it’s fun, and it’s what I want to do.”

And ever since she made the full-time move to MMA, all eyes in the sport have been on her. She has yet to disappoint, showing off her next level striking in win after win. And with her previous resume and her ever-growing skill set in her new sport, the chatter quickly turned to Holm competing in the UFC. Very quickly.

“We talked about it with my coach (Mike Winkeljohn) before and we said ‘let’s get some work in and get out there and see what doors open,’” she said. “Even back then, I think (longtime promoter) Lenny (Fresquez) had talked with (UFC matchmaker) Sean Shelby to let him know that I was going full-time in MMA, so we’ve had our feelers out there the whole time, so that if the opportunity presented itself, we wanted to see what was out there, and obviously we wanted to be where the best is, and that’s in the UFC.”

Things really began to heat up in March, when Fresquez met with the UFC to discuss a deal. Those negotiations broke down, but this week, a deal was cut to bring Holm to the Octagon. And she’s ready for it.

“I thanked Lenny for all the hard work, and his hard work is over, and mine has just begun,” said Holm. “I’ve got a lot of work ahead of me.”

That’s never frightened Holm, 32, who is known for her Spartan work ethic. So is she working on her armbar defense?

“There’s a lot to work on in MMA, and obviously I want to work on armbar defense, not just for Ronda, 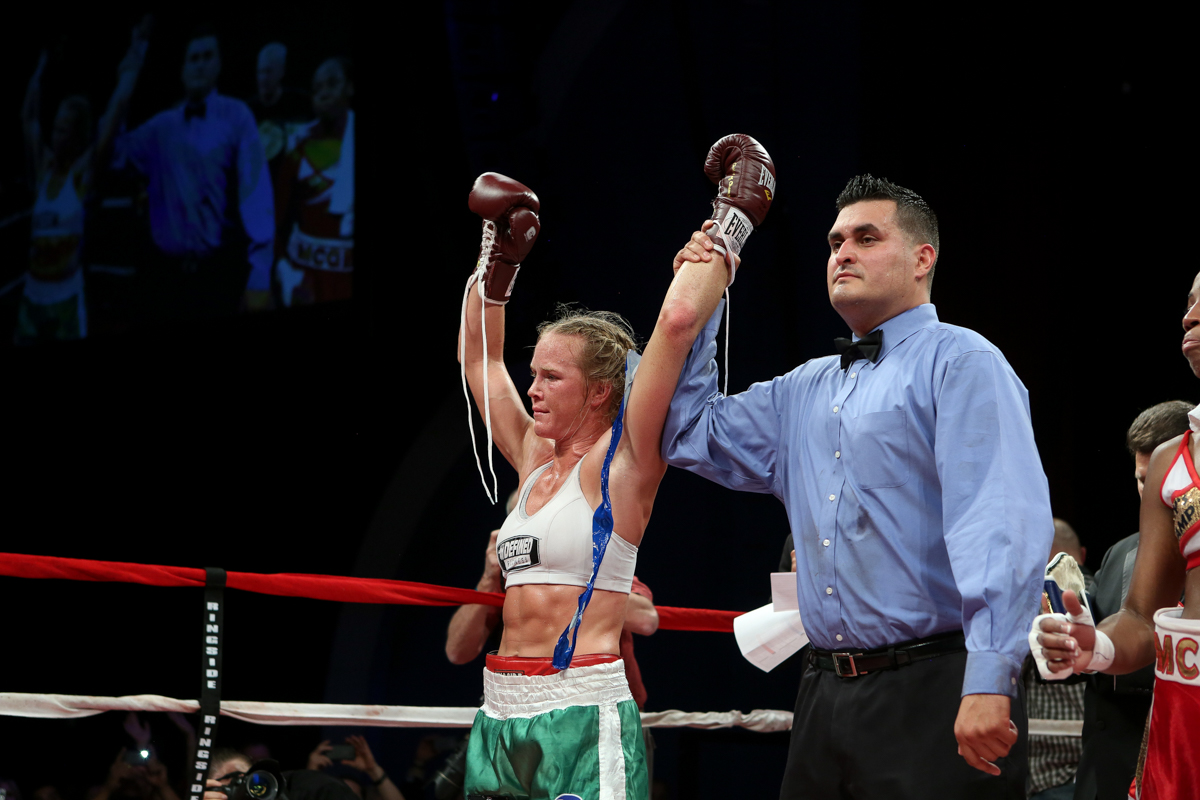 but for all the girls,” said Holm. “She (Rousey) is not the only one that has more of a ground game than me; a lot of people do, but obviously she’s the best at it right now. But that doesn’t mean the others aren’t a threat as well.”

And it doesn’t mean that despite only competing in MMA full-time since last May, Holm can’t hang with those who have more experience. She has been around the sport for years, her striking is impeccable, and now that she’s had a little break to heal the arm she broke in her most recent win over Juliana Werner in April, she’s been doing her homework on the rest of the 135-pound roster in the UFC.

“I’ve probably been watching more since I broke my arm because I’ve had time to do it,” she said. “I had six fights in the last year, so I always had an opponent in front of me, and I was working on a game plan for that fight, and I really didn’t wear myself out too much looking at all the girls that I wasn’t fighting at the time. I obviously watched Ronda’s fight last weekend and have been watching the other girls’ bouts since my time off, and it’s been fun just to sit back and watch it.”

Just like it’s going to be fun watching Holm in the UFC, where she hopes to get to the point where she can make history.

“When I first started doing MMA, people asked me what my goal was in this, and my goal is to be the first female that has titles in both MMA and boxing because nobody’s done that,” she said. “And it’s totally doable, and that’s my plan.”

Photos by Will Fox / The Fox Identity