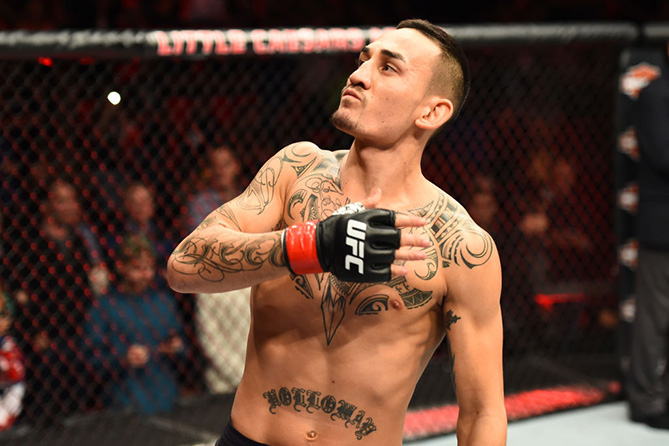 Max Holloway signals to the crowd as he enters the Octagon prior to facing Jose Aldo of Brazil in their UFC featherweight championship bout during the UFC 218 event inside Little Caesars Arena on December 02, 2017 in Detroit, Michigan. (Photo by Josh Hedges/Zuffa LLC/Zuffa LLC via Getty Images)" align="center" />
Three months into 2018, Max Holloway still doesn’t have the words to describe his 2017 campaign in the Octagon, one that saw the laid back Hawaiian emerge as the undisputed featherweight champion by defeating Brazilian icon Jose Aldo in his hometown of Rio de Janeiro and solidify his standing atop the 145-pound ranks by duplicating that effort six months later at UFC 218 in Detroit.

Part of it is because last year was the culmination of a journey that started in the shadows more than four years ago with a second-round stoppage victory over Will Chope on the preliminary card of the first event broadcast exclusively on UFC FIGHT PASS.

But it’s also because the 26-year-old titleholder is far more focused on the challenges in front of him and continuing to build his legacy inside the UFC cage.

“Words cannot describe it. I cannot put it into words,” Holloway said of his twin title fight triumphs over Aldo, which moved his winning streak to 12 and counting. “I don’t think it has soaked in yet.

“I’m not trying to be like these guys that have a little success, bask in it and then get hit by reality really hard. I’ve been here. I worked hard to get here, so I’m focused. I’m not letting this get to my head. I did great, I looked great, but if you guys think I looked great in the last one, look forward to the next one because I’m only getting better.”

Heading into his interim title clash with Anthony Pettis at UFC 206, Holloway described the featherweight ranks as “murky” and vowed to be the man that brought clarity to the highly competitive division.

A year later, he accomplished that feat by handing Aldo a second consecutive defeat and he has no intentions of deviating from that path now that he’s reached the division’s summit.

He was scheduled to continue that pattern of taking on the top contenders within the featherweight division earlier this month in a showdown with former lightweight champion Frankie Edgar – which was originally slated for UFC 218 before “The Answer” was forced to withdraw and was replaced by Aldo – but it wasn’t meant to be.

A month before the contest, Holloway was pulled from the pairing, scuttling one of the most highly anticipated fights of the first half of the year and forcing the talented Hawaiian to the sidelines.

I didn’t pull from the fight; the docs pulled me. I don’t think people understand – I tried everything

“I tried everything in my power, in my will, to try and get that fight going,” said Holloway. “I didn’t pull from the fight; the docs pulled me. I don’t think people understand – I tried everything. I was asking, ‘How ‘bout we do this? Do this?’ and they kept telling me no.

“I was trying to figure out any possible way to get me in there and the docs have the last call and they said it was a no go.

But just as missing out on the chance to face Edgar in December afforded Holloway the opportunity to cement his place atop the division with a second straight stoppage victory over Aldo at Little Caesars Arena, his removal from UFC 222 was the catalyst for a breakout performance that has resulted in the champion’s return to action being even more anticipated than before.

Brian Ortega jumped at the opportunity to replace Holloway opposite Edgar and used the matchup to launch himself to the top of the list of contenders in the featherweight division and establish himself as a potential breakout star for the organization. The laid back Californian needed less than a round to earn the victory, becoming the first man to stop Edgar in the process and instantly making an inevitable clash with “Blessed” one of the biggest fights of the year.

Right now, the only hold-up is Holloway’s health, as the featherweight champion is still waiting on final clearance from the doctors on the ankle injury that forced him out of the fight with Edgar and kicked off this entire chain of events.

In an ideal world, Holloway would like to return in July or August, but regardless of when it happens, he’s excited about the opportunity to share the cage with someone as dangerous as Ortega.

“When you think of Ortega, people see danger – he’s my most dangerous opponent, he can finish me here and there, blah blah blah – and he’s great everywhere, but I can’t wait,” he said of his future clash with the unbeaten contender. “When there is danger, I walk towards it. I don’t care.

“Take the warning signs away from me because the more warning signs, the more I’m going to walk towards it,” laughed Holloway. “The man is dangerous. Everybody keeps talking about his jiu-jitsu and how he’s stopping guys there and he’s got a couple finishes on his feet, so I’m excited. He had a great showing that night and he’s had a lot of great showings, period.

“His striking is coming along, it’s looking great, and his grappling speaks for itself, so I can’t wait.”

Neither can everyone else.