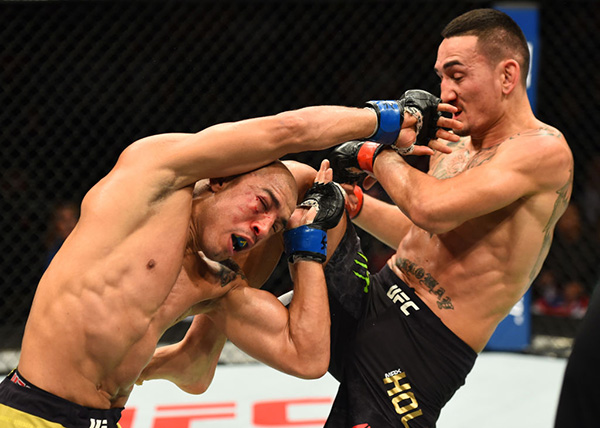 Max Holloway</a> lands a knee against <a href='../fighter/Jose-Aldo'>Jose Aldo</a> of Brazil in their UFC featherweight championship bout during the UFC 218 event inside Little Caesars Arena on December 02, 2017 in Detroit, Michigan. (Photo by Josh Hedges/Zuffa LLC)" align="center" /> HOLLOWAY vs ALDO 2

For a long time, it looked like Jose Aldo would never lose his UFC featherweight crown. On Saturday night at Detroit’s Little Caesars Arena, Max Holloway looked like he’s settling in for a long reign of his own as he stopped Aldo for the second time this year, retaining his 145-pound title with a third-round stoppage in the main event of UFC 218.

The victory was the 25-year-old Holloway’s 12th in a row and first title defense. The 31-year-old Aldo, who replaced the injured Frankie Edgar in Saturday’s bout, lost his belt to Holloway in June via third-round TKO as well.

Aldo started out more patiently than he did in their first fight, and while Holloway didn’t produce a blitz of activity, a stiff left jab kept pumping, reddening Aldo’s face in the process. Aldo was measured in his return fire, but he was throwing hard, eventually landing a solid uppercut just before the horn.

The same game plans stayed in effect in round two but at a higher work rate, with the exchanges heating up between the two featherweights, especially late in the frame. And while Holloway continued to use his jab, he mixed his attacks up even more in the second as Aldo stuck to the old reliable of his leg kicks and overhand rights.

The confident Holloway ignited some firefights in the third round, and as he got the better of the exchanges, Aldo began to look tired. The former champ wasn’t backing down, but Holloway’s pressure was relentless, with the exchanges rapidly becoming more one-sided. A desperation takedown by Aldo did buy the Brazilian star some time, but Holloway quickly took the top spot, firing away at his bloodied foe until referee Herb Dean stopped the fight at 4:51 of round three.