Holloway focused on that Champ Life ahead of UFC 218 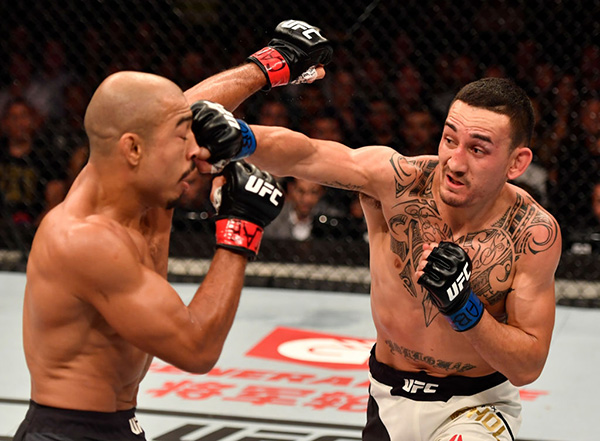 UFC featherweight champion Max Holloway didn’t blink when informed that Frankie Edgar was out of their UFC 218 main event this Saturday and that the man the Hawaiian beat for the undisputed crown, Jose Aldo, was in.

The way he sees it, that’s what fighters do.

“I said it before and I’ll say it again, I’m a fighter,” he said. “I’m not a matchmaker. My name is not Max “The Matchmaker” Holloway. My name is Max “Blessed” Holloway and I’m a fighter. That’s what I do. I want to fight anybody and everyone that they think is the best. And if they come to the point where they’re considered one of the best, then he’s the next guy up.”

It’s a refreshing attitude, but not a surprising one, considering that the Hawaiian took a harder road than most to his first title fight against Anthony Pettis last December. Leading up to that bout with the interim featherweight belt on the line, Holloway won nine straight, with the final four victories on that run over Cub Swanson, Charles Oliveira, Jeremy Stephens and Ricardo Lamas cementing his claim to a title shot.

He beat Pettis that night for consecutive win ten, and Aldo became number eleven when Holloway stopped him in three rounds in June. That’s four of the top 15 vanquished already, and if you’re a fighter on that list, the champ expects to see you.

“I want to fight everybody in the top 15,” Holloway said. “I want everybody to know that when they look at their record and they see Ls, one of those Ls is from me. Some guys are gonna have two, some guys may get three, we don’t know, but that’s what it’s about.”

Holloway expects to give Aldo another defeat in Detroit this weekend, and as far as facing the man widely considered to be the best featherweight of all-time just six months after their first bout, again, he doesn’t blink.

“Right now I’m focused on Champ Life and I’ve been talking about Champ Life,” he said. “Imagine if LeBron James and the Cavaliers, the one year they beat Golden State (2016), the next year they’re supposed to meet in the finals and they say we don’t want to play these guys again, we beat them last year. That’s not a championship mindset. If I beat you, I’m gonna beat you worse the second time. If you come back a third time, it’s gonna keep getting worse for you. If I gotta prove it to you a hundred times, I will.”

It’s almost the ultimate in respect, the idea that if someone like Aldo keeps finding his way to the front of the line, Holloway is willing to fight him. But the 25-year-old has always respected the game, and in the lead-up to their first fight and to the rematch, he has nothing but good things to say about Aldo. When the Octagon door shuts, that’s another story. Then it’s simply business.

“Outside of there, I was respecting him,” Holloway said. “I wanted to fight this guy since I was 18, I was looking up to him when I was 16 years old. But at the end of the day, he’s a human, I’m a human, we both bleed, we’re not that much different. So when I got in there, the respect went out the window. I worked my way to this and I wanted to show the world why I was the best and why I deserved this. It was kind of surreal looking at him across the cage, and he was everything I thought. I knew he was going to be fast and explosive, I knew he was strong and was going to land some shots. But it’s not how you start the race. He came out sprinting, I matched his sprint and he happened to die down.”

That’s when Holloway surged ahead and halted Aldo at 4:13 of round three, joining Hall of Famer BJ Penn as the only Hawaiians to wear championship gold in the UFC. Now the hard part begins, as Holloway not only looks to defend the crown, but to follow in Penn’s Hall of Fame footsteps as one of the sport’s greats. His formula to do that is simple.

“Win,” he said. “You gotta keep winning and you gotta keep winning in spectacular fashion. Of course, I want to win, but I want there to be no comparison. After the first fight (with Aldo), a lot of people were saying I lost the first two rounds, and I don’t want that to happen. I want them to say I’m on a whole other level and that’s how you build your legacy - just smash guys. That’s how Jose built his. He was just smashing dudes. He had a couple competitive fights here and there, but other than that, he was dominating. To build my legacy, I’ve got to keep dominating. I have to fight guys that people say will give me a hard time and go out there and make them look silly, and show that there’s a difference between being champion of the world and a top ten fighter.” 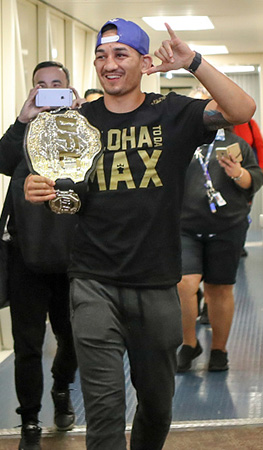 At 25, the idea of smashing opponent after opponent is not just a possibility, but a probability, at least in a fighter’s mind. In reality, though, there’s always that someone out there who won’t go away, who will push a fighter to his limit. Some shy away from such talk, but Holloway welcomes the idea of finding his great rival.

“I want that,” he said. “That’s exciting. That’s how you find out if you’re built for this. Too many people out there are cherry picking. But you need fights like those, fights where you’ve got to dig deep and see who wants it more. That’s how you find out if you’re a fighter. I look forward to those days – there’s no questioning my chin, no questioning my heart – I’m here, I’m ready to go.”

When he says it, the excitement in Holloway’s voice is clear. Despite everything good going on in his life, fighting is still the cornerstone of his life. And it will be for a while. Until then, there’s no time to relax. Not yet.

“You see these guys who get to where they think they want to be and they get comfortable,” he said. “They start slipping, they start falling, and in one year, Champ Life turns into one bad fight, then a bunch of bad fights and then no one remembers your name. Fighting is so short. There’s no reason to sit back and smell the roses. I’m here, I know my window is short and you can’t put a timeline on this thing, so I’ve got to work as hard as I can, control what I can control and hopefully everything goes well. When I hang up the gloves, then I can enjoy it and sit back and relax.”