Holloway Chasing Another Finish in Sweden

"I don’t think it’s in my blood to be a boring fighter. I want to fight." - Max Holloway 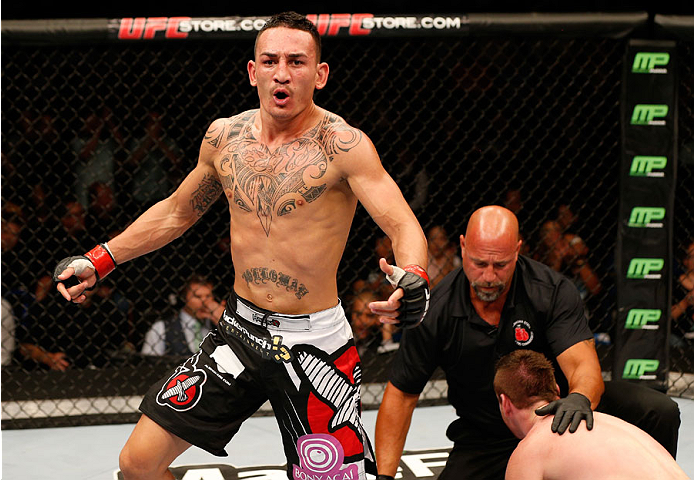 By all measures, Max Holloway has already had a successful 2014 campaign.

Over the first eight months of the year, the Hawaiian featherweight has amassed three stoppage victories, beginning with a Knockout of the Night-winning performance against Will Chope on the first fight card of the year and continuing with a third-round submission win against fellow prospect Andre Fili at UFC 172.

Less than a month ago,  “Blessed” picked up his third victory of 2014, collecting a third-round finish of resilient newcomer Clay Collard to earn the 10th win of his professional career. Having already gone 3-for-3 inside the Octagon, no one would have be surprised had the 22-year-old Waianae native decided to head home and relax for a couple months with his family.

Instead, the talented up-and-comer answered the call to replace to former title challenger Chan Sung Jung opposite Akira Corassani in the co-main event of October 4th’s UFC Fight Night event at the Ericsson Globe Arena in Stockholm, Sweden.

“I had to run it by my coaches, so we took half a day,” Holloway said of the decision to return to action so quickly following his victory in Tulsa, Oklahoma in late August. “I wanted it and it was just convincing my coaches because I got banged up a little bit in that Collard fight.

“We talked about it, I’m good, I’m healthy and my coaches wanted it, so it was no biggie.”

While Collard earned praise for his durability, the August bout was an offensive showcase for the long and rangy Holloway, who used his full arsenal to slowly, but surely, wear down the UFC newcomer and secure the finish late in the final frame. At 5’11”, Holloway is tall for the featherweight division and uses that to his advantage, working behind a stinging jab, strong leg kicks and steady diet of body shots, all of which help create openings for the talented striker to unleash some of his more creative attacks.

Despite his current hot streak, Holloway is currently on the outside looking in when it comes to the featherweight rankings. While he’s earned a trio of victories this year and boasts an overall 6-3 record under the UFC banner, the exciting young fighter hasn’t been able to crack the Top 15 in the highly competitive division, but he’s hoping that a victory over the TUF 14 alum next month in Sweden will earn him a place in the rankings and a more high profile opportunity next time out.

“Corassani’s only loss in the UFC was to (Dustin) Poirier and we’re both guys that are underneath the Top 15,” Holloway, who dropped his UFC debut to “The Diamond” on short notice at UFC 143, began. “I think whoever wins could get pushed into the Top 15 and if we don’t it’s all cool.

“I think me and him are those guys just underneath the Top 15, ready to burst out and I feel like if I can finish Corassani, that would be 4-0 with four straight finishes against some durable, tough guys, so hopefully I could get that high profile fight after this.”

The October 4 event – which airs on UFC FIGHT PASS – is the third UFC event to be held in Sweden and marks the first time Holloway has found himself in the penultimate bout of the evening, though being a part of the co-main event didn’t factor in to his decision to accept the bout.

But now that they’re locked in to the second last position on the fight card, the scrappy featherweight is excited for the opportunity to set the table for Gunnar Nelson and Rick Story.

“When I got the call to fight Akira, I thought they were probably going to bump us down and we were just going to fight,” Holloway, who is 4-0 in main card opportunities in the UFC, admitted. “But when we got the contract and they said we’re going to stay as the co-main event, it was huge.

“It should be a fun fight,” he continued. “Akira Corassani ain’t no punk and he brings the fight; he likes to fight and he’s got heavy hands.”

Before he even sets foot in the cage with Corassani in Sweden, Holloway is already dreaming up the ideal way to wrap up his year and celebrate his 23rd birthday.

“Ideally, if I can get out of this fight unscathed with a finish and look good – look impressive – I would like to fight my birthday weekend,” the ambitious rising star admitted. “My birthday is December 4, so I’d like to fight on that Wediman-Belfort card (UFC 181) on December 6 and hopefully get five fights this year.”

But first, he has to deal with the 32-year-old Corassani, who returns to fight in his home country for the second time in the UFC, having registered a unanimous decision win over Robbie Peralta the last time the organization shipped its eight-sided cage to Stockholm.

And Holloway has every intention of dealing with him in impressive fashion, just as he has his first three opponents of the year.

“They can expect a fight,” he said quickly when asked what the Swedish fans can expect next month. “Corassani comes to fight, I come to fight and I like giving the fans what they want. I like to strike – that’s no secret – and this could be a Fight of the Night, Fight of the Year kind of fight. I don’t think it’s in my blood to be a boring fighter. I want to fight. I want to be exciting and I want to be known as one of the best, one of the most exciting, busiest fighters.

“I want it all and that’s why I keep working hard and keep pushing.”

Tickets for UFC Stockholm, which takes place at the Ericsson Globe Arena on Saturday, October 4, are on sale now. To purchase tickets, click here