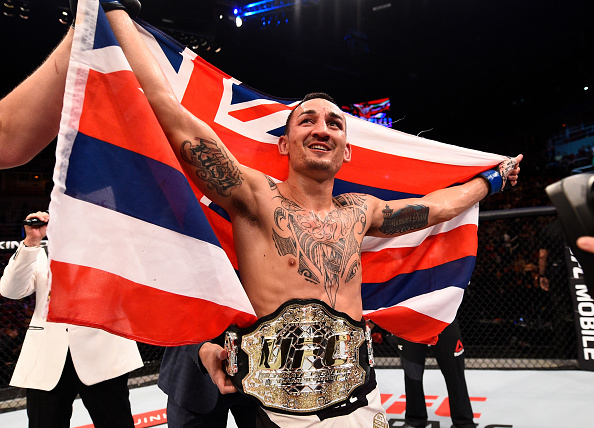 Max Holloway’s eleventh consecutive victory was the most important of his life, as the pride of Waianae, Hawaii dethroned the king of Rio de Janeiro, Brazil in the main event of UFC 212 Saturday night at Jeunesse Arena, stopping Jose Aldo in three rounds to become the undisputed UFC featherweight champion of the world.

“I’ve been telling you guys already, this is the ‘Blessed’ era,” said Holloway, who unified the interim title he won last December with Aldo’s the UFC’s first featherweight champion, whose reign at the top since 2010 was only interrupted when he was defeated by Conor McGregor in 2015. Aldo would take an interim belt back when he defeated Frankie Edgar last July, and the Brazilian superstar was elevated to full champion when McGregor vacated the belt.

But all that back and forth was put to rest by Holloway in less than 15 minutes in Aldo’s hometown.

The two circled each other warily in the opening minute before Holloway began to lead, with Aldo seeking openings to counter. With a little over two minutes gone, Aldo tagged Holloway with a left hook and right cross that staggered the Hawaiian, and the Brazilian flurried in an attempt to finish. Holloway recovered well but wasn’t able to even the score with Aldo, who landed more hard shots before the round ended.

Aldo remained the more accurate striker of the two in the second, and it didn’t help Holloway that every blow thrown by the Brazilian – even the ones that missed – drew roars from the crowd. Holloway was finding his rhythm, though, and he began to land more than he did in the previous round, drawing Aldo into more exchanges. After taking a couple hard blows from Aldo in the closing minute, Holloway began to showboat, only to get caught again as the horn sounded.

Holloway upped his work rate in the third and his accuracy rate was increasing too as he pushed Aldo at every turn. Two minutes in, a flush right hand dropped Aldo and Holloway moved in for the finish. Aldo tried to clear his head, but Holloway was relentless in his attack, with a series of right hands continuing to jar the Brazilian. As Holloway got into the mount position and then took Aldo’s back, the punches kept coming, and eventually, referee John McCarthy had no choice but to stop the bout. The time of the stoppage was 4:13.