Holloway and Edgar readying for battle at UFC 222 in Vegas

Max Holloway and Frankie Edgar have unfinished business and the two are finally going to fight in the main event of UFC 222 in Las Vegas on March 3.

Holloway’s 11-fight win streak is one of the most impressive in UFC history and he’s taken out some of the best fighters in the history of the featherweight division. But against Edgar, Holloway gets the type of challenge that can catapult him even further as a UFC superstar.

“If you want to be the best you have to beat the best – and the best is ‘Blessed,’” Holloway said. “Come see me, baby.”

Before Holloway ever addressed Edgar at Friday’s UFC 222 pre-fight press conference at TD Garden in Boston ahead of the UFC 220 weigh-ins, the featherweight champion made it known that he’s keeping an eye on the lightweight title fight between Tony Ferguson and Khabib Nurmagomedov because he’s a “big 145er.”

Edgar said that the champ better focus on the fight in front of him. 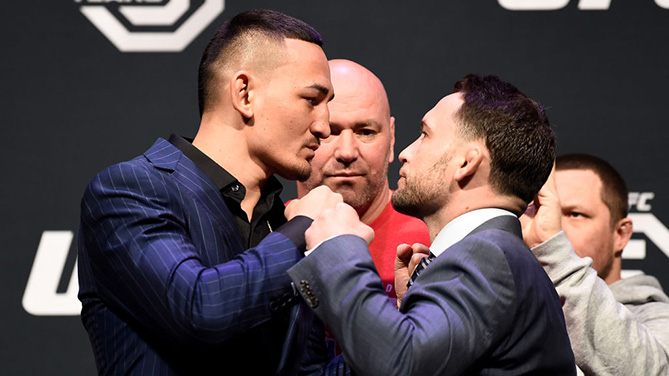 “Yeah, it probably is (my last shot at a title),” Edgar said. “I’ll make the best of it. Max is over here worrying about these two guys, but I’m only worried about one guy. I’m going to get in my pirate ship and go to Hawaii and get some gold.”

Holloway immediately interjected to remind the challenger he did make the walk to the Octagon for their originally scheduled fight back in December at UFC 218 – a dominant win over late replacement Jose Aldo.

“First thing’s first. You guys know me I’m always in the present,” Holloway said. “December 2nd I showed up and now we rematch. Now it’s on you, Frankie. Let’s get ready, brother.”

Edgar suffered an eye injury and was forced to pull out of the fight but has recovered and is hungry to become just the fifth two weight world champion in UFC history.