When Kevin Holland fought on Dana White’s Contender Series his only goal was to impress UFC brass and earn a contract.

“Trailblazer” didn’t sign the dotted line last June but what he did do was impress Dana White and match-makers Sean Shelby and Mick Maynard. His performance landed him a short notice fight on UFC 227 against now light heavyweight title contender Thiago Santos.

And while that fight didn’t go his way, he pushed Santos to a decision and showed significant promise. Since then, Holland has secured back-to-back UFC wins over John Phillips and Gerald Meerschaert. Now he’s looking to keep the ball rolling at UFC Greenville against Alessio “Manzo” Di Chirico.

“No disrespect to ‘Beef boy’, you know because that’s what they call him. ‘Manzo’ means beef,” Holland said. “No disrespect to him at all but he does is shoot for a takedown, he shoots in all of his fights. He gets touched a bit, he shoots. It’s what you’re supposed to do when you’re in a troubling situation. In boxing you grab and in MMA you shoot for take downs. He will get put in a troubling situation, he will shoot.”

Oh did I forget to mention that Holland loves to talk?

After his win over Meerschaert he was critical of himself and Meerschaert, calling for a fighter that would like to stand and bang rather then hit the canvas. Looking back on that interview, Holland realized how he can prevent his fight with Di Chirico from going the same way.

The ingredients to that beef stew started about 12 weeks ago when Holland put in his first ever full mix martial arts training camp. The first half of which, started out at the UFC Performance Institute in Las Vegas before heading to Texas to finish up his preparation for June 22.

Holland’s confidence is never lacking but it was evident that the work he put in for this fight has him feeling at an all-time high.

“The sky is truly the limit, actually it’s further than that because there are already footsteps on the moon,” Holland said. “This is a big opportunity for me. I’m on the main card for the UFC. The future is bright I can’t tell you exactly what it entails but I know it entails some more “w’s”, couple bonuses and some shiny s***.” 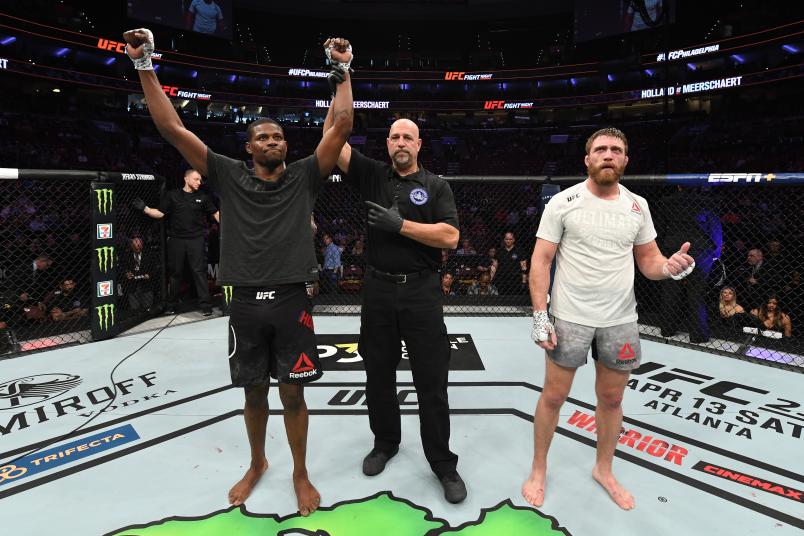 Including Holland’s DWCS fight he’s fought four times in the last year, that fight cadence is something that he wants to keep steady. In fact, he is looking to take after one of the UFC’s all-time greats.

Holland is looking to “smoke” Di Chirico on Saturday and plans to give fight fans a performance to remember.

“That’s what this game is all about, performing at your top tier and showing out.”

Tune into the main card to see if Holland can back-up his talk against Di Chirico.