Kevin Holland may hate me one day for putting this in print, but when I reached out to him to see about arranging an interview, his almost instant response was:

Later, once we were on the phone, I gave him an opportunity to retract his statement, letting him know that in over two decades covering combat sports, no one ever said that to me. He wasn’t backing down.

“Those guys are trippin’,” he said. “That’s part of the game. It’s something I’ve been waiting on for a long time, so it’s kind of fun.” 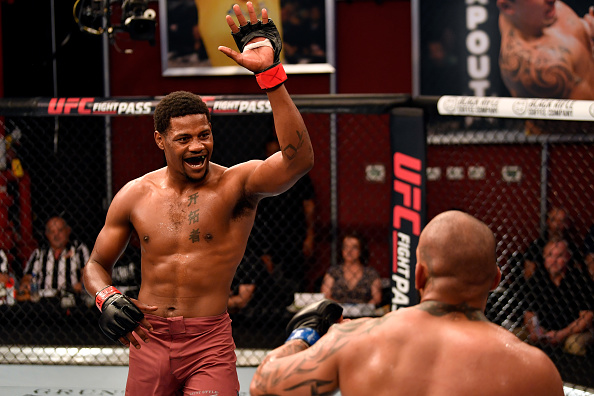 Well, the 25-year-old from Fort Worth, Texas may as well love interviews, because he’s damn good at them and he’s probably going to be getting a lot of practice doing them if his career keeps going the way it has.

And this Saturday may give him the biggest boost of all, as he makes his UFC debut on the UFC 227 Pay-Per-View main card against Brazilian banger Thiago Santos. That’s a big jump from the regional circuit for the 13-3 middleweight, but if he’s feeling the heat, he’s not showing it.

“Honestly, I feel like it’s my second fight; I feel like I just did a fight for the UFC,” said Holland, whose most recent bout was a three-round decision win over Will Santiago on Dana White’s Tuesday Night Contender Series on June 12. “I just fought in front of the people that are most important because they’re the ones that cut your check. So I did that part and now I get to go out there and actually fight in front of family and friends and all the people in the crowd that will soon become friends and family. And I’m just happy to go out there and put some entertainment on. So I ain’t nervous. I’m super happy that the hard work is showing and I’m gonna be able to go out there and give my family everything I always said I wanted to give them.”

It’s a calm that you can hear in Holland’s voice, and if you’ve done this long enough, you can detect whether it’s real or not. Holland’s ease before the biggest fight of his career is real. Maybe it’s because it happened so fast, with him getting a short notice call for the show during jiu-jitsu practice.

“I was actually at Travis Lutter’s jiu-jitsu class, doing jiu-jitsu, when they called my manager and my manager called my coach and my coach came over when I was rolling and said, ‘Hey, phone call.’ The first response was, ‘What did I do?’ (Laughs) I thought I was in trouble for something. And it was a UFC phone call, so that was pretty cool.”

He didn’t hesitate to say yes to that offer either.

“No hesitation at all,” Holland said. “They asked me if I wanted to do it and I was like, ‘Heck yeah. That sounds fantastic.’”

It may have helped that Holland didn’t even know who Santos was when the fight was offered. It was only after the fact that he realized that he had seen “Marreta” in action before.

“No disrespect to the dude, but I didn’t even know who he was,” said Holland. “I’ve actually seen him fight before, but the messed part about it is when I saw him fight, it was against David Branch. And here we are.”

Against Branch, Santos saw a four-fight winning streak snapped by Branch via first-round knockout. Santos has rebounded from finishes before, but it’s always interesting to see how a fighter reacts the next time out, and if his opponent can put doubt in his head as soon as the bout begins.

“If he has doubt in his head already, it’s gonna be there the moment he gets in there and gets touched by me,” said Holland. “So if he doesn’t want doubt, his best bet is to not let me hit him, because I’m fast, especially for the 185 division, and I’m long, so if I touch you, either the speed can knock you out or the power can and I’m a firm believer in that. But if he doesn’t have any doubt, if he’s a strong, confident man, then he should be okay. He should have no worries and his last knockout shouldn’t be why he gets knocked out this time.”

Holland says this all matter-of-factly, but he also wants to make it clear that he does have a Plan B if necessary.

“I’ve got seven knockouts and five submissions, so I might go in and grapple him,” he said. “I might be nice and take him down and show him some of this Travis Lutter Jiu-Jitsu.”

Bold stuff from the UFC rookie, but if you saw his DWTNCS bout with Santiago, it was evident that he isn’t shy under the bright lights. And despite shutting Santiago out, the “Trailblazer” admits that he wasn’t surprised that he didn’t receive a UFC contract that night.

“I felt like it wasn’t my greatest performance, but I was happy to finally win a decision, because every decision I’ve ever had, I lost,” Holland said. “So I was like, ‘Hey, I finally accomplished that as a pro.’ I was disappointed because I killed my knockout and submission ratio – I was all finishes. But honestly, I think that I’ve put in the work, I haven’t fought slouches, I fought tough opponents, I’ve never turned anything down, and with who I am as a fighter and everything I’ve accomplished, I felt ready. But I didn’t know if the performance was enough.”

“I was ready to get home and fight in two weeks if I had to so I could get some more Ws,” he said. “I thought if I could get two or three more wins in before September, I could get on the Dallas card. So I was excited and I was ready to go. Whatever it takes to get to what you’re trying to get in life, you gotta get out there and push for it.”

Those are fighting words, and you’re going to hear a lot of them from Kevin Holland today, tomorrow and for a long time after that. But more importantly, you’re going to want to see him fight, and that’s exactly what his master plan is.

“It’s the most important thing in this game,” Holland said. “You could be a guy that goes out here and kinda does good, but if you’ve got the people caring, whether they see you win or they see you lose, that’s something powerful right there. That helps you get into a situation where you can start pointing things in certain directions and I think that’s awesome. With a guy like me, whether they love me or whether they hate me, just watch the fight. That’s all I care about. Because as long as they watch, I can keep doing it. And I love doing this.”