Holdsworth: The Fight is What Matters

"I finish fights. I’m an aggressive fighter and that’s just
my style. I’m never gonna go in there and just look to lay and pray on
somebody." - Chris Holdsworth 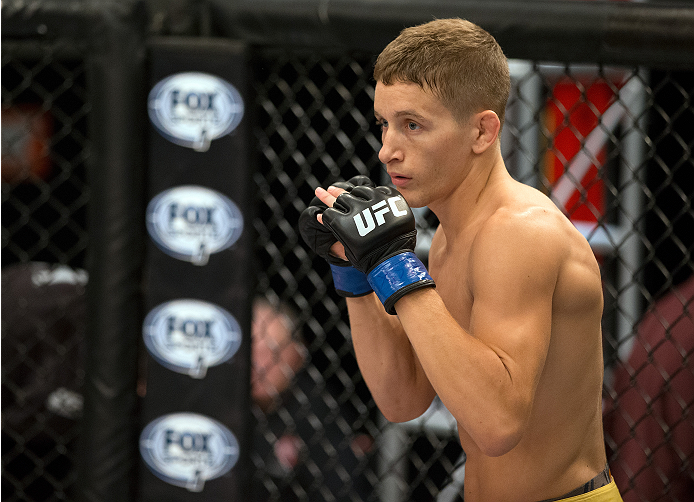 In the age of Instagram, Twitter, and Facebook, it’s almost become old hat to see your favorite athletes and celebrities posting pictures with their favorite athletes and celebrities. And while The Ultimate Fighter season 18 finalist Chris Holdsworth isn’t one to be posting shot after shot, it’s pretty safe to say that his celebrity pic with UFC legend Royce Gracie is better than yours.

“I got a picture with Royce handing me my blue belt,” said Holdsworth.

And while we laugh as he recounts his story, which, admittedly, proves that his picture with Gracie is better than mine from the UFC 100 press room, it does illustrate a key point when it comes to the 26-year-old from Sacramento. And that point is that despite being surrounded by the Gracies in his formative years and now being in the gym every day with Team Alpha Male squadmates like Urijah Faber, Joseph Benavidez, and Chad Mendes, he’s not going to be star struck by anything or anyone in this game.

“I think that kind of left me a long time ago,” he said. “I would see a lot of fighters, even before I moved to Sacramento, and I kind of understand how it is, like being approached and not being able to do your own thing. So I see guys and say, I could go over and get a picture, but he’s probably getting bombarded by a hundred different people and I’m just gonna let him be. I just look at them as friends. They’re all really cool friends and really cool training partners, and they’re living their dream. Of course, I was a fan before I was a fighter, and I still am a fan, but I don’t really let that stuff bother me.”

Sometimes, that’s half the battle. So when the idea of taking part in the 18th season of the MMA reality series came up, it wasn’t a series of ‘what will I do’ questions. It was the next natural step for the promising bantamweight.

“I knew that I put in my time as an amateur, I was making my way up through the professional ranks, and (UFC matchmaker) Sean Shelby had watched two of my previous fights,” said Holdsworth, who entered the competition with a 4-0 pro record. “So I knew I was on his radar, I knew Urijah and the team always put in a good word for me, so it was just a matter of time I think (to get to the UFC). But TUF was definitely a great opportunity, and I’m not gonna say it was the fast track, but I saw a door open and I jumped right through it. I think I’m one of the best at 135 and it was just a matter of time before I was able to showcase my talent and let people know who I am.”

If they didn’t know before, they know now. In three TUF 18 bouts, Holdsworth went three for three, submitting each of his foes (Louis Fisette, Chris Beal, and Michael Wootten) in the first round. You could say it was a calculated plan by Holdsworth to finish each fight as soon as possible in order to keep himself fresh for the next bout during the six week competition, but that’s the way he always fights.

“I finish fights,” he said. “I’m an aggressive fighter and that’s just my style. I’m never gonna go in there and just look to lay and pray on somebody. That’s not what I do, it’s not in my DNA. There’s something about me, I get in there and always look for the finish. That’s the fighter I am and that’s always been my mentality. It’s a benefit to get in there and get stuff over with quick, and I think it’s the best way to do things; finish the fight, get in and out, and move on.”

That’s not to say he didn’t get some pre-show advice, most notably from TUF 14 finalist and current teammate TJ Dillashaw.

“TJ gave me a couple strategies,” said Holdsworth. “The main thing he said was if you can fight first, fight first. He knew that once you fight first, you’ll have that much more time to heal up from injuries or re-peak and be ready for the semis, and that’s exactly what happened. I was happy I was able to do that. I was ready, I didn’t want to sit around and think about fighting. I wanted to get that first fight out of the way, then re-look at things and just keep training and keep getting better, and focus on the semis.”

In the semis, Team Tate’s Holdsworth took out Michael Wootten, and now he will face another Brit in Team Rousey’s Davey Grant this Saturday in Las Vegas. Of his foe, Holdsworth says, “He is a cool dude and I have a lot of respect for him. We got along quite well on the show and I have nothing bad to say about the guy. He's a big 135er with a lot of strength and power. He’s a good technician as well. There’s one problem though. He's trying to take something that I want. So why not get in a fistfight over it? May the best man win.”

With Grant also finishing two of his three opponents on the show (semifinal foe Anthony Gutierrez forfeited when he was unable to make weight), Saturday’s bout has the potential to be the one that finally steals the show from the ladies who joined the men on TUF 18. Yet despite the focus being on the fairer sex during taping, Holdsworth isn’t bothered by it.

“It didn’t really matter to me,” he said. “I kind of felt, now that I’m watching the show, that they are focusing on the girls a little bit more, but they’re trying to build that division, it’s something new, and people are interested in it, so I can see how that’s working out.”

See, Holdsworth isn’t interested in the spotlight, celebrity, or anything else that is out of his hands. He’s here to do what he enjoys most, and that’s fight.