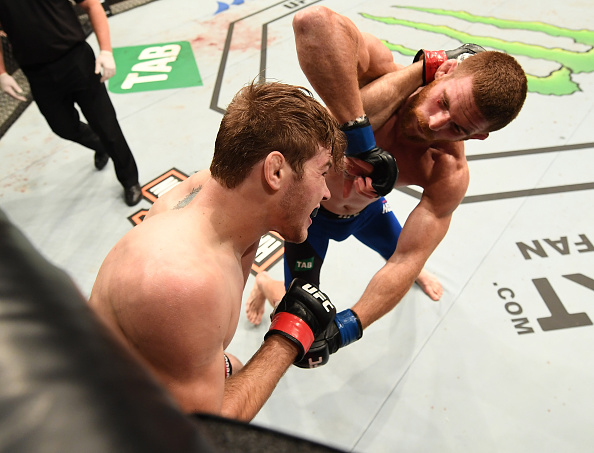 After a strong start from Matthews, the momentum shifted to Holbrook, who was able to control his opponent in the clinch and on the ground. There was more of the same in the second, Matthews staying competitive, but Holbrook attempting several submissions on the Aussie prospect. With two minutes left in the third, Matthews found some clear daylight when he got himself into a dominant position on the mat, but Holbrook’s defense nullified any significant offense from the Aussie.

Omari Akhmedov traveled to Melbourne and handed Aussie MMA pioneer Kyle Noke his first loss at home since 2012, as he drilled out a three-round unanimous decision via scores of 30-27 and 29-28 twice.

Akhmedov drew first blood with a right hand in the opening minute that rattled his foe, and he followed up with a takedown. Noke attempted to secure a triangle choke from his back, but Akhmedov’s ground striking didn’t allow the Aussie to lock it in, and subsequently, it was a big frame for the Russian.

Noke had some success with his striking in the first two minutes of the second frame, but he was then put on his back again by Akhmedov, who was unable to match the damage done to his foe in the first round, prompting a restart from referee Steve Perceval. Akhmedov was unbothered by the change in scenery, as he scored again with a big right hand on Noke, who was bloodied and bruised by the first ten minutes of fighting.

Staying upright until the final minute of the fight, when Akhmedov delivered another takedown, Noke tried to make something happen, but he was unable to catch his opponent with a fight-changing blow. 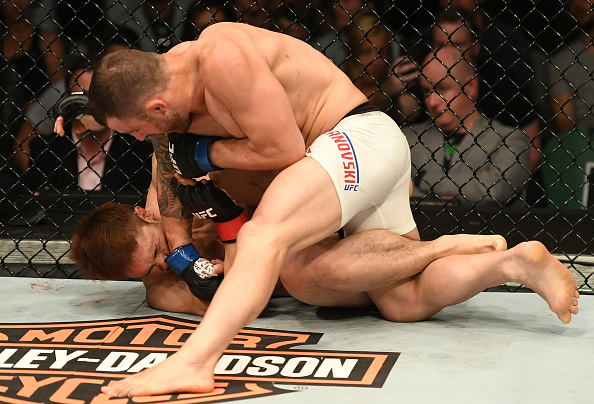 It continued to be a good night for Australian debutants on Saturday, as Alexander Volkanovski scored his first UFC victory, stopping Japan’s Yusuke Kasuya in the second round.

The action quickly went to the mat, and there were compelling exchanges throughout the opening stanza, with the lasting impressing being the thudding ground strikes landed by Volkanovski.

There was no let up in the Australian’s ground-and-pound attack in the second round, and after an extended barrage of unanswered strikes, referee Greg Kleynjans stepped in and halted the bout at the 2:06 mark.

Light heavyweight newcomer Tyson Pedro battled through some early adversity in his Octagon debut, but the Sydney native rebounded quickly and submitted Khalil Rountree Jr. in the first round.

Roundtree struck big in the first minute of the fight, knocking Pedro down with a left hand. Pedro recovered immediately, scoring a takedown of his opponent that put the ball back in his court. And after patiently working his ground game, he took Rountree’s back and sunk in the rear naked choke that ended the bout at the 4:07 mark of round one.

Strawweight prospect Danielle Taylor made some key adjustments in her three-rounder with South Korean veteran Seohee Ham, allowing her to come away with a split decision victory.

Taylor employed a lot of lateral movement in the first round, but Ham’s pressure and a laser-like left hand provided the most significant offense in the opening five minutes. The Californian began landing more shots, particularly with the right hand, in the second, even though Ham’s forward motion wasn’t letting up in the slightest. Taylor didn’t seem as bothered by the pressure in round two as she was in the first, and she added a takedown for good measure in the closing seconds.

Taylor continued to control the action in the third round, with more effective striking and another late takedown putting a cap on the first UFC victory for “Dynamite,” who improves to 8-2. Busan’s Ham falls to 16-8.