"It will be a hard-fought, back-and-forth fight because he’s a tough guy who doesn’t give up and that’s my mentality, too." - Charlie Valencia 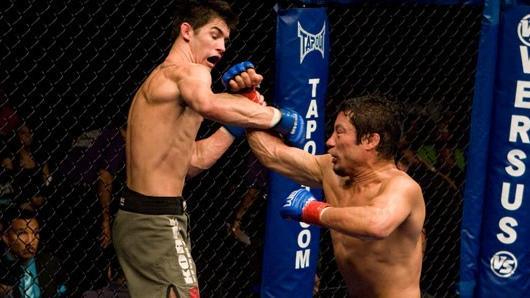 Canadians are a hockey-crazed people and UFC fighter Charlie Valencia shares their passion for the puck.

Valencia, an MMA pioneer who clashes with Montreal’s Ivan Menjivar at UFC 129, doesn’t mind one bit that 55,000 Canadians will probably be rooting against him at Rogers Centre in Toronto. The die-hard Los Angeles Kings fan views the looming trip to the Great White North as an opportunity to fulfill a dream – outside of the Octagon.

“Once I get there I really want to visit the Hockey Hall of Fame,” said Valencia, who is slated to arrive in Toronto next Tuesday. “It’s going to be a once-in-a-lifetime opportunity.”

Surprisingly more of a hockey fan than an MMA fan, Valencia played ice hockey in high school, which is somewhat remarkable considering he is 5’3” (not exactly the grueling sport’s prototypical build), a native of East Los Angeles (hardly known as a hockey hotbed) and a Spanish-speaking Mexican-American (a demographic known more for producing fighters, soccer players and baseball players, rather than ice sport athletes).

“I’ve been hit harder in hockey than in MMA,” Valencia said. “I remember getting hit as a kid and almost vomiting on the ice. It was awesome! But I used to get into too many fights in hockey and I got kicked out of the league.”

As a boy in East LA, Valencia was mesmerized by the epic 1993 Campbell Conference Finals battle between the L.A. Kings and Toronto Maple Leafs. Underdogs in the playoff series, the Kings pushed the Maple Leafs to a do-or-die Game 7. In one of hockey’s most gripping playoff games ever, a Wayne Gretzky hat trick proved the difference in the pivotal 5-4 Game Seven overtime victory. The win elevated the Kings into the Stanley Cup Finals for the first time in history.

“That was the best playoff series I’ve ever seen,” Valencia said.

Donning an L.A. Kings jersey while walking around Toronto next week might be inviting ridicule and harassment, but it’s something Valencia has considered. He’s even thought about wearing a Kings jersey during his walk to the Octagon.

Yet Valencia is also weighing paying homage to the Toronto Maple Leafs. While still on the fence, he has a definite sense as to whose jersey he would wear if it becomes reality.

“If I ever had to wear a Maple Leafs jersey it would be Wendel Clark,” Valencia said. “He was a forward who hit like a truck and had incredible wrist shots with so much torque on them. The guy would hit you, fight you, score on you. He was a game-changer.”

The legendary Clark, nicknamed “Captain Crunch” due to his punishing, ultra-physical style of play, inflicted a heavy toll not only on opponents but also his own body. The injury-plagued star retired from pro hockey in 2000 at only 33 years of age. In that regard, Valencia is more Wendel Clark than Randy Couture. At 47, “The Natural” is the elder statesman on the UFC roster and the oldest fighter on the UFC 129 card, followed by 40-year-old Vladimir Matyushenko. Valencia, 36, is third in seniority, but the humble Californian has been the MMA version of NFL great Brett Favre. As Favre did during the twilight of his stellar 20-year career, Valencia for the past few years has routinely alluded to possible retirement but played on. For several years now, before every fight, Valencia has said, ‘This could be my last fight.’ His 12-6 pro record does not include the unsanctioned fights he waged back in the mid-1990s. Spending roughly 15 years in the fight game is a huge achievement, but a broken down body is not entirely behind Valencia’s way of thinking.

“It definitely goes through your mind as the years go by and you get to my age. You wonder whether you can keep up with all these young guys coming, the new breed,” Valencia said. “They’re bigger, faster, stronger and better. I don’t want to be the guy who stays too long and gets his a** kicked every time out there by these kids. I don’t think that would be fair to me or the fans. So the thought does go through my head that every fight could be my last fight. I always think on a fight-by-fight basis. It’s always your last fight – I never like looking too far ahead. But as long as I can compete with these young guys …”

Menjivar, eight years Valencia’s junior, is more pioneer than new breed, considering that he’s been fighting professionally for a decade and has collided with a Who’s Who of the sport, including Georges St-Pierre, Urijah Faber,  Matt Serra and Caol Uno. The Montreal-based Menjivar, who trains alongside GSP at Tristar Gym, has fashioned a 21-8 record and has earned a crowd-pleasing reputation as one of the sport’s most acrobatic, dynamic and daring fighters.

“He’s a scrappy guy,” Valencia said. “I admire him for the way he fights – he puts it all on the line and can fight from any position. It’s a difficult fight because he poses a lot of threats. We both fight kind of the same because we’re always moving forward, so I’ve just tried to get in really good shape because I see this as a hard fight that will go all 15 minutes. It will be a hard-fought, back-and-forth fight because he’s a tough guy who doesn’t give up and that’s my mentality, too. It’s going to be a scrap the entire time but I see my hand being raised in the end.”