The History of 'Champ Champs'

UFC 259: Blachowicz vs Adesanya Has The Potential To Deliver Yet Another 'Champ Champ' To The Elusive Club. Read About The History Of UFC 'Champ Champs'
By McKenzie Pavacich, on Twitter @mpavacich_ • Mar. 1, 2021

It’s no secret that UFC cards featuring three title fights have proven to be some of the most memorable fight nights in history. But UFC 259 has the opportunity to deliver even further, with the possibility of Israel Adesanya joining the esteemed and exclusive “champ champ” club.

But before we can get to that, we have to go back to the beginning. It all started at UFC 205 on November 12, 2016. A historic card for a laundry list of reasons, UFC 205 was not only just the second-ever UFC event to cram three title fights into a single night, but it was also the first sanctioned MMA event to take place in New York City. And what better stage to set the scene for an unprecedented night than Madison Square Garden?

One of the most iconic venues in the history of sport became simply a small detail in the storyline of UFC 205, when Conor McGregor became the first fighter to hold UFC titles in multiple divisions simultaneously after defeating Eddie Alvarez, accessorizing his featherweight belt with a lightweight one as well.

UFC 259 will become just the seventh UFC event to feature three title fights (UFC 33, UFC 205, UFC 214, UFC 217, UFC 245, UFC 251), but also the first ever to feature four champions across three fights on a single card. And while all three title fights possess the promise to be dynamic matchups, all eyes will be on the light heavyweight division as middleweight champion Adesanya takes on Jan Blachowicz with the hopes of adding a second championship belt to his resume.

Only seven people in UFC history have ever won belts in multiple divisions, with four of them achieving the new pinnacle of MMA: becoming a “champ champ,” or a simultaneous champion in multiple divisions. Let’s break down the short list of athletes to accomplish this unrivaled feat.

UFC Hall of Famer Randy Couture was a champion of both the light heavyweight and heavyweight divisions. He first defeated Maurice Smith at UFC Japan on December 21, 1997 to become the UFC heavyweight champion. He earned that title three separate times across his career, with an additional two title defenses.

On September 26, 2003, Couture defeated Tito Ortiz at UFC 44 to become the UFC light heavyweight champion. He earned that title for a second time, defending his crown once. 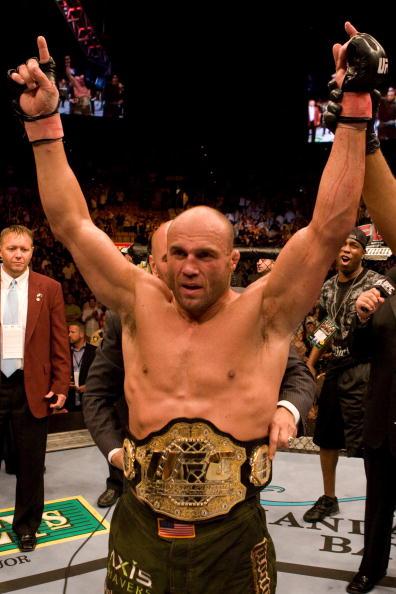 Penn then moved down to lightweight, where he faced Joe Stevenson at UFC 80 on January 19, 2008 for the UFC lightweight title, which he went on to defend three times. In between, he attempted to become the first simultaneous two-division champ in UFC history when he challenged welterweight king Georges St-Pierre at UFC 94 in 2009. 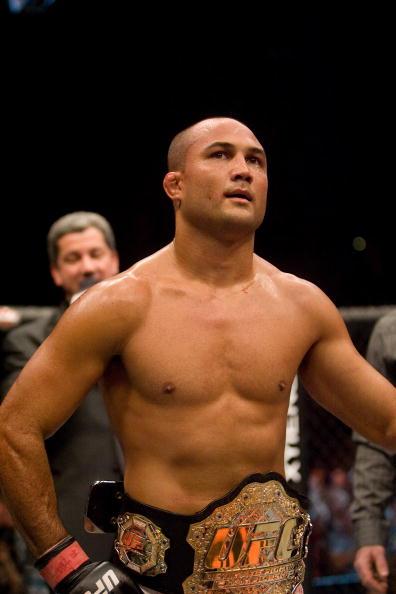 With a knockout that will live on in highlight reels forever, Conor McGregor began his reign in the UFC featherweight division after defeating Jose Aldo in just 13 seconds at UFC 194 on December 12, 2015.

Less than a year later, “The Notorious” lived up to his nickname on November 12, 2016 when he defeated Eddie Alvarez at UFC 205 to also earn the UFC lightweight title, becoming the first fighter to hold UFC titles in multiple divisions simultaneously, coining the term “champ champ.” 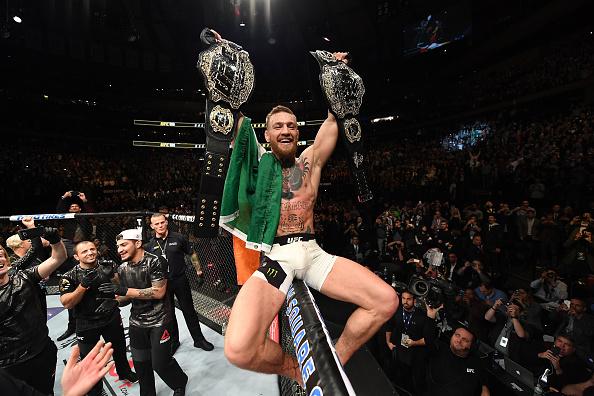 Widely regarded as one of the greatest of all time, UFC Hall of Famer Georges St-Pierre first became the UFC welterweight champion on November 11, 2006 after defeating Matt Hughes by second-round knockout at UFC 65. After losing the title to Matt Serra, he earned the undisputed belt again on April 19, 2008, which he defended nine consecutive times over the course of nearly five years, before later vacating the title.

Following a four-year hiatus from the sport, St-Pierre defeated Michael Bisping on November 4, 2017 at UFC 217 to become the UFC middleweight champion, which he vacated before retiring in 2019. 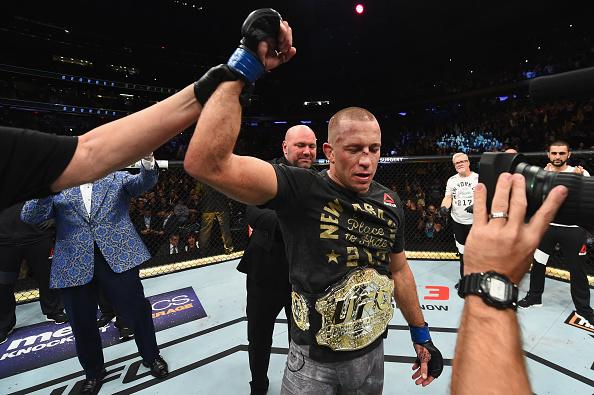 Georges St-Pierre of Canada celebrates with his championship belt after defeating Michael Bisping of England in their UFC middleweight championship bout during the UFC 217 event at Madison Square Garden on November 4, 2017 in New York City. (Photo by Josh

On May 23, 2015, Daniel Cormier submitted Anthony Johnson to win the vacant UFC light heavyweight championship. Cormier defended this title three times over the course of nearly three years, before vacating the title in December of 2018.

Before vacating his UFC light heavyweight title, Cormier defeated Stipe Miocic in the heavyweight division at UFC 226 to become the second person to simultaneously become the champion of two divisions, and the first African American to do so. Cormier defended his title against Derrick Lewis four months later to cement his title of “champ champ.” 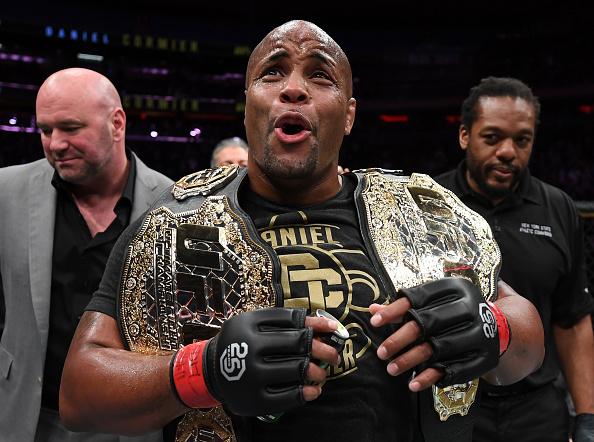 Daniel Cormier celebrates after his submission victory over Derrick Lewis in their UFC heavyweight championship bout during the UFC 230 event inside Madison Square Garden on November 3, 2018 in New York, New York. (Photo by Jeff Bottari/Zuffa LLC)

On December 29, 2018, Nunes defeated Cris Cyborg by first-round knockout at UFC 232 to also become the UFC women’s featherweight champion, becoming the third-ever “champ champ,” and first woman to do so. Nunes has defended the featherweight title once, and looks to do so for a second time against Megan Anderson at UFC 259. In addition to holding two belts, she is also sporting an 11-fight win streak heading into this weekend’s bout. Her eight title fight victories are tied for sixth with Randy Couture and Jose Aldo for the most title fight wins in UFC history. 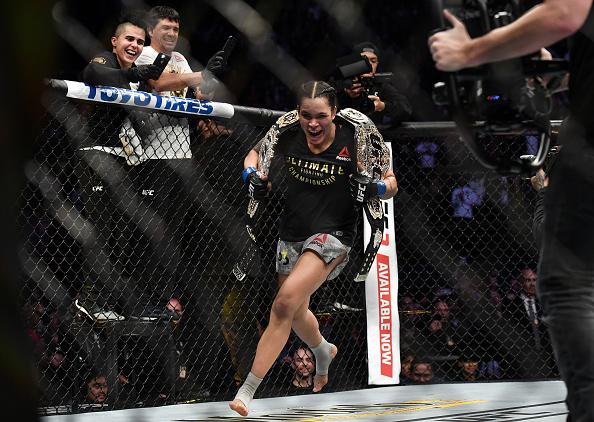 On August 4, 2018, Henry Cejudo avenged his loss to Demetrious Johnson with a split-decision victory at UFC 227 to become the UFC flyweight champion. He defended the belt once with a 32-second TKO over TJ Dillashaw, before vacating his title on February 29, 2020.

Six months after defending his flyweight belt, Cejudo fought Marlon Moraes for the vacant UFC bantamweight championship at UFC 238. He earned a third-round TKO over the favored Moraes on June 8, 2019 to become the fourth-ever “champ champ,” and the first person to be an Olympic gold medalist and simultaneous two-division UFC champion. He defended his bantamweight title on May 9, 2020 at UFC 249 with a TKO victory over Dominick Cruz, before announcing his retirement following the bout. 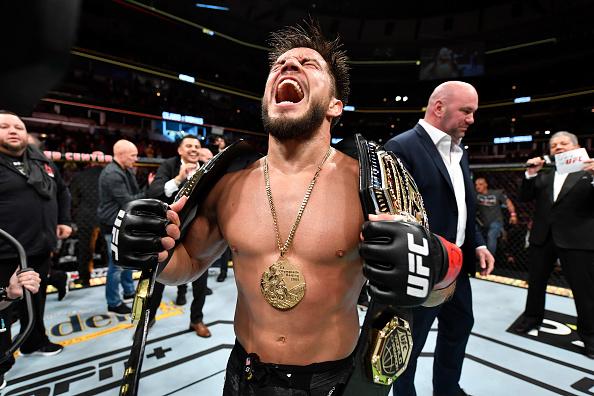 Henry Cejudo celebrates his TKO victory over Marlon Moraes of Brazil in their bantamweight championship bout during the UFC 238 event at the United Center on June 8, 2019 in Chicago, Illinois. (Photo by Jeff Bottari/Zuffa LLC)