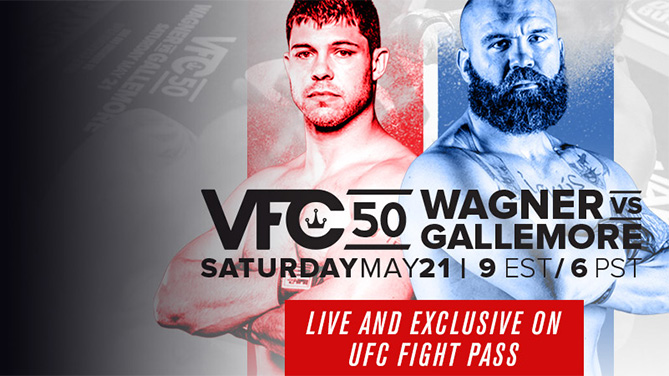 This Saturday in Topeka, Kansas, Victory Fighting Championship will hold its historic 50th event, and the organization has put together an outstanding fight card to mark the occasion.

The 10-fight lineup includes a pair of championship clashes, plus the return of rising star in the welterweight division and an assortment of other competitive contests.

Here’s a look ahead to what’s on tap for Victory FC 50 on Saturday.

Two big boys from the Midwest collide in the main event with the Victory FC heavyweight strap hanging in the balance as TUF 10 alum Wagner squares off with fan favorite Gallemore in what should be an old fashioned slobberknocker to close out Saturday’s festivities.

Wagner was the second pick of Team Rampage on the historic all-heavyweight season of the long-running reality TV competition and returns after two years on the sidelines recharging his batteries and rediscovering his passion for the sport. In Gallemore, he faces as powerful opponent with a “kill or be killed” mentality who has only seen the scorecards once in his career.

And really, isn’t a guy with the nickname “Big Kansas” the perfect fighter to help close out an entertaining night of fights in Topeka? We think so too.

Fresh off a second-round submission win over Alonzo Martinez at Victory FC 47 in January, Mercado returns in a clash with promotional newcomer Pimental in a battle for the featherweight belt.

The 31-year-old Elevation Fight Team member has rebounded from back-to-back losses with consecutive victories. A grinder with a solid submission game, Mercado came up short in his last championship opportunity, falling to current UFC fighter Luke Sanders under the RFA banner in November 2014, but he’s looked good over his last two and seems to have found a home with Victory FC and picking up championship gold will only solidify that positioning.

Pimental is a Brazilian veteran representing the Blackzilians, entering on a two-fight winning streak after suffering the first loss of his career back in March 2013. A submission specialist with eight of his 14 victories coming by way of tap out, the 37-year-old likes triangle chokes, so Mercado will need to pay attention to his posture and wrist control if he wants to avoid getting tapped.

Pitolo is the latest in a steady stream of prospects from Hawaii to hit the regional scene and start making waves, while Guthrie is the kind of seasoned regional vet that ascending prospects need to deal with on their way up the divisional ladder.

The West Oahu MMA product enters this bout on a five-fight winning streak, with the last four of those victories coming by way of stoppage. Last time out in his Victory FC debut, he collected a second-round technical knockout victory over TUF alum Andrews Nakahara and he looks to take another step forward in this showdown with the battle-tested Guthrie on Saturday night.

With 10 more fights than Pitolo, Guthrie has experience on his side, having started his pro career nine years ago and shared the cage with the likes of Jesse Forbes, Jorge Santiago and Bobby Voelker over the years. Last summer, he picked up a second-round submission win over Steve Mann to halt a two-fight skid and now “The Pain Train” will look to halt Pitolo’s climb up the welterweight rankings.

The Yuri Villefort Comeback Tour continues at Victory FC 50, as the former hyped prospect looks to make it three-in-a-row when he takes on veteran Cody Carrillo.

One of the founding members of The Blackzilians along with his brother Danillo, Jorge Santiago, Gesias Cavalcante and Rashad Evans, Villefort began his career with six straight victories and was viewed as a future Top 10 fighter when he signed with Strikeforce. Five straight losses followed, including two in the UFC Octagon, but he seems to have righted the ship with consecutive stoppage wins.

Still just 25, perhaps this is the start of an impressive second act for the once-promising prospect.

Carrillo is a familiar face on the Midwest MMA scene and looking to improve on his 3-1 record in the Victory FC cage. Last time out, the Janjira Muay Thai product needed just 32 seconds to put Sean Wilson to sleep with a guillotine choke – an impressive follow-up to his 26-second TKO win over Shakir McKillip before that – which should make it clear that despite his below .500 record, Carrillo isn’t one to be taken lightly. 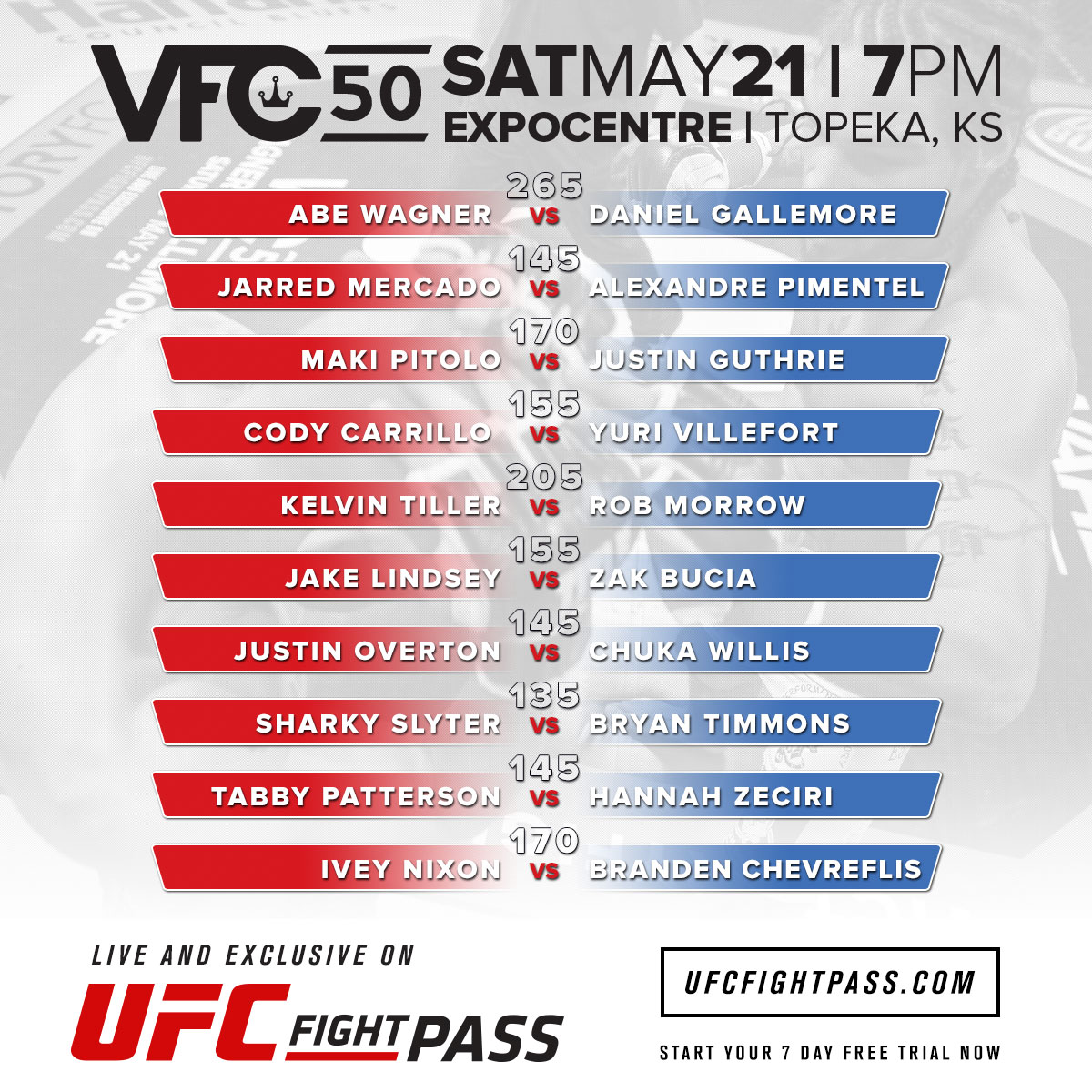 Others to Watch at Victory FC 50

Jake Lindsey (10-4) enters his bout with Zak Bucia (15-7) off the first Victory FC loss of his career, a third-round submission defeat to Dakota Cochrane at Victory FC 47 in January. Bucia had his four-fight winning streak snapped last time out, so this lightweight contest should be a spirited affair.

Chuka Willis (7-2) looks to make it four straight victories as he steps into the Victory FC cage for the first time opposite Justin Overton (3-0). “The Lion King” picked up a decision win over Gaston Reyno last time out and his two losses have come against solid prospects Jake Roberts and Hakeem Dawodu.