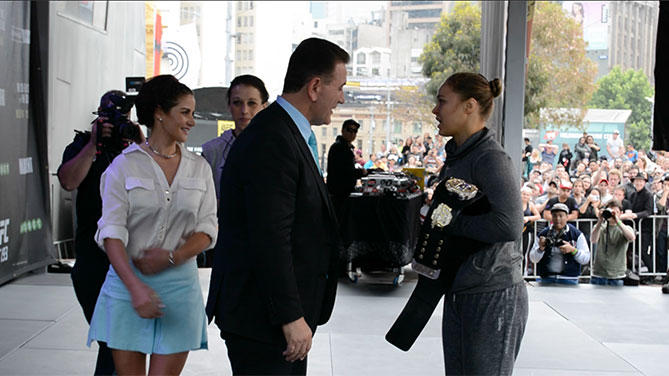 None of the excitement would have been possible without the efforts of the Andrews Labor Government, led by Minister for Sport, John Eren, working with UFC officials to implement world-class safety regulations governing Mixed Martial Arts in Victoria.

Most significant: New regulations in Victoria that introduce a “safety enclosure,” such as the Octagon, for MMA events. Previously, MMA promotions could only be held in a boxing ring.

“All we’ve done is made the sport safer, and as a consequence of that, we have the UFC in Melbourne, the sporting capital of the world,” Eren said Thursday afternoon as he answered questions about the new regulatory regulations with Tom Wright, UFC Executive Vice President and General Manager, Australia, Canada and New Zealand.

“I think it’s already a huge success,” Eren said of the event, which takes place Saturday at 10 p.m. ET/7 p.m. PT at Etihad Stadium. “There’s no question. You can see by the excitement of the people here. As I understand it, of the many thousands of tickets that have been sold, some 40 percent of those tickets are sold to people from interstate and international.

That means a boon to our economy. Our restaurants will be full, our bars and pubs will be pumping. And that’s what it’s all about – having a great event, benefitting the economy generally.”

Eren looked around and gestured to the fans screaming at the arrival of the women’s bantamweight champion onstage.

“And the vote of satisfaction, as you can see, is so many people so excited about Ronda Rousey,” he said. “And so am I, actually! I’m a big fan of Ronda Rousey.

“When you have a look at some of the most famous athletes in the world, Ronda Rousey, at this point in time, is No. 1. So we’re really honored and privileged to have such an athlete in Melbourne.

Payne, 30, is coming off her historic winning ride aboard Prince of Penzance in the 2015 Melbourne Cup earlier this month, an outcome considered one of the biggest upsets in the Cup’s storied history. Payne is the first-ever female jockey to win the prestigious cup in its 155-year history, and only the fourth female jockey to ride in the Melbourne Cup.