The UFC Always Starts Off The Year Right. Take A Look At Some Of The Best First Event Of The Year Moments.
By E. SPENCER KYTE, ON TWITTER @SPENCERKYTE • Jan. 2, 2023

The first event of each calendar year always carries a certain level of intrigue and interest, and with good reason.

Over the years, the opening fight card of the year has produced countless incredible moments and memorable encounters, including some Fight of the Year winners, a couple insane finishes, and more than a handful of compelling championship clashes.

As we close in on the first event of 2023, let’s take a look back at some of the matchups and moments from the opening events of years gone by. 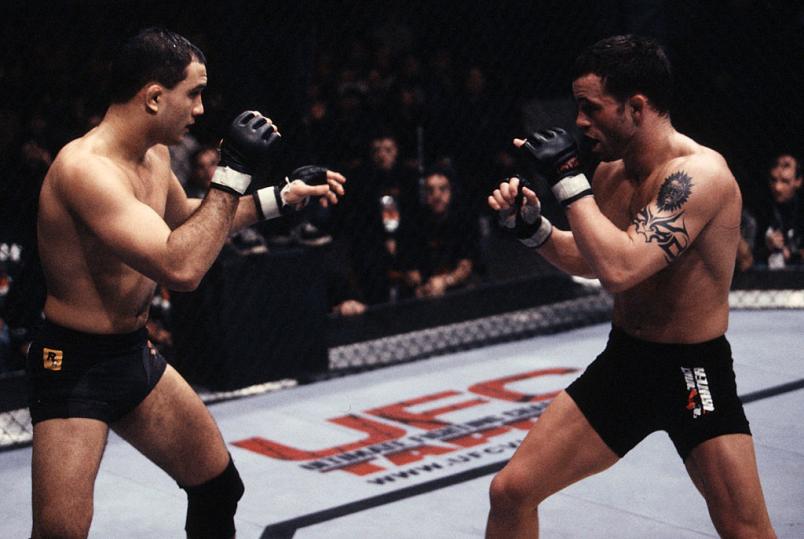 BJ Penn and Jens Pulver battle during UFC 35 at the Mohegan Sun Arena on January 11, 2002 in Uncasville, Connecticut. (Photo by Susumu Nagao/Zuffa LLC

Two of the best lightweights on the planet closed out the first UFC event of 2002 by battling one another for 25 minutes with the lightweight title hanging in the balance.

Pulver entered as the champ, having won the title the previous February in a bout with Caol Uno and successfully defending it against Dennis Hallman. Penn arrived as the ascending challenger, fresh off an 11-second knockout win over Uno and brandishing a 3-0 mark after his first year as a professional fighter.

The fight was extremely close, with Pulver earning a majority decision win backed by his superior conditioning and ability to dictate the terms of engagement for long stretches of the final two rounds.

A classic lightweight clash that remains one of the seminal moments in the division’s Octagon history, and an excellent first main event of 2002. 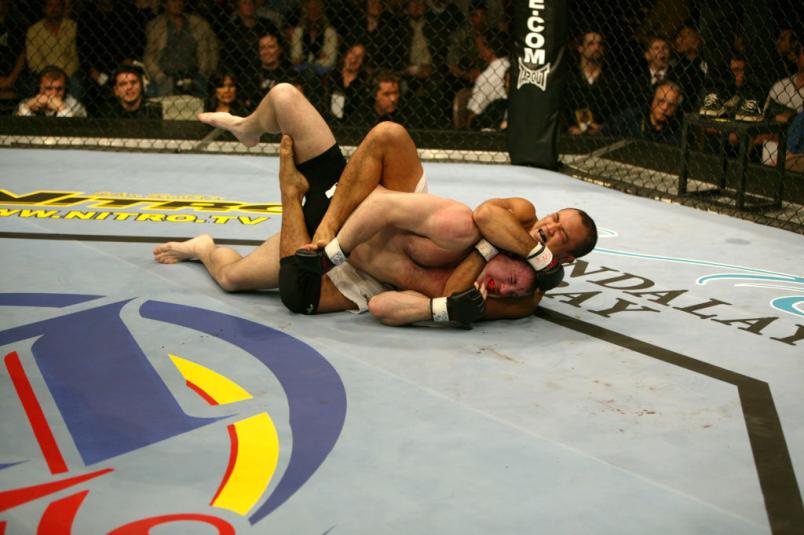 Two years after Penn lost to Pulver in his first bid to claim UFC gold, “The Prodigy” challenged Hughes for the welterweight title in the UFC 46 co-main event.

Hughes had already successfully defended his belt five times, earning finishes in four of those contests, including his first battle with Frank Trigg. He was 35-3 overall, but none of it mattered to Penn.

He handled Hughes’ strength in the clinch and was the quicker and slicker of the two on the canvas, nearly taking the champion’s back a minute into the contest. He continued to work from top position for most of the round, and late in the frame, Penn worked to Hughes’ back and sunk in a fight-ending rear-naked choke.

Penn gave Hughes a kiss on the head and strutted around the cage in a state of surprised excitement. All those folks that wonder why people revere Penn need only to check out this performance to understand how incredible the Hawaiian was in every facet when he was on his game. 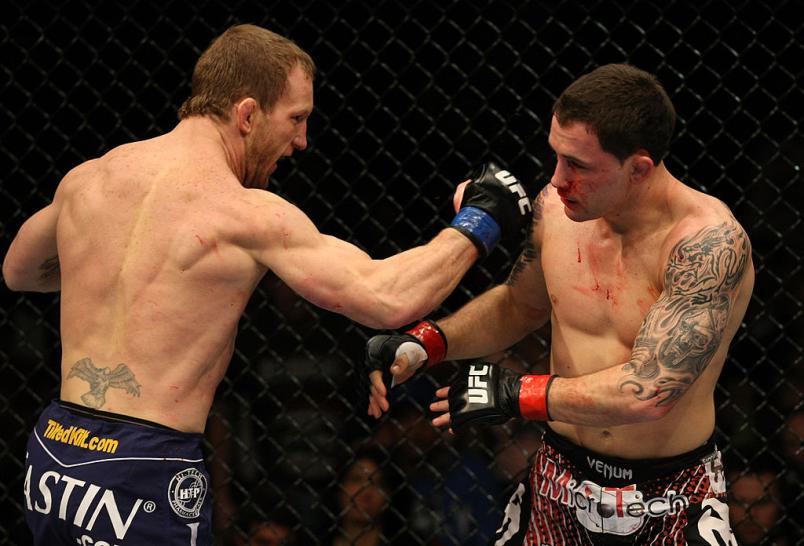 More than a decade later, there is still something wonderful about Fight of the Year being decided on January 1, but that was the case in 2011 when Edgar and Maynard met in this lightweight classic.

Maynard seemed to have Edgar on the brink of being finished for the majority of the opening stanza, rocking the champion on multiple occasions. Somehow, Edgar not only survived, but came out for the second round like nothing had happened, taking the fight to Maynard and setting this fight on course to be one of the greatest in UFC history.

The lightweight rivals went to-and-fro for the final 15 minutes, each having moments of success, neither doing quite enough to salt things away. The judges were split right down the middle: one seeing the fight 48-46 for Edgar, another the same way for Maynard, and the third scoring it 47-47.

Not only did the year begin with an absolute gem and the Fight of the Year, but also ensured we’d see these two run it back one more time in 2011… and that one delivered, too! 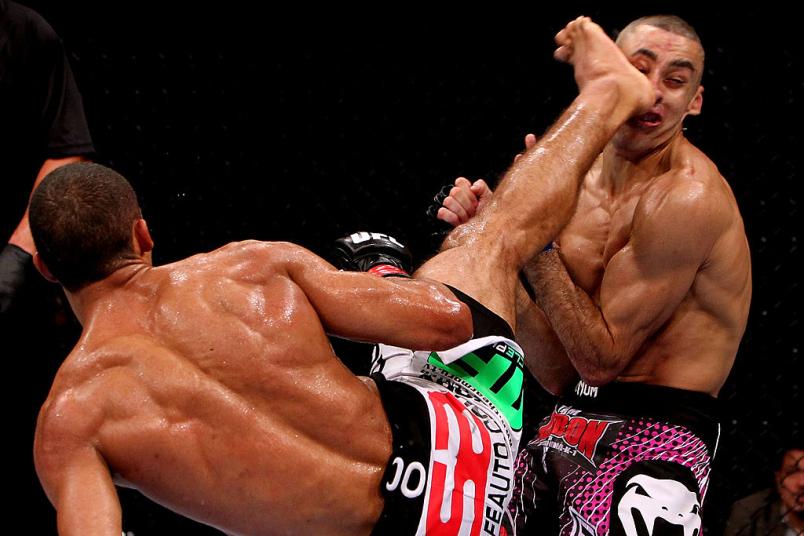 Edson Barboza knocks out Terry Etim with a spinning back kick in a lightweight bout during UFC 142 at HSBC Arena on January 14, 2012 in Rio de Janeiro, Brazil. (Photo by Josh Hedges/Zuffa LLC)

This is still my favorite knockout in UFC history.

Barboza was 9-0, coming off quality wins over Anthony Njokuani and Ross Pearson. Etim had won five of his last six, rebounding from his lone setback in the run with a 17-second submission win over Edward Faaloloto just two months earlier to push his record to 15-3.

Over the first 10 minutes, the Brazilian and the Brit traded blows, running relatively level for two rounds. In the third, Etim pressed forward, trying to take the fight to Barboza, but the quick Brazilian frequently pushed him back. After landing a slick combo closed out by a chopping kick to the thigh, Barboza slid backwards, reset, and spun in a flash.

Etim was out as soon as the kick landed, falling to the canvas like a marble statue.

All these years later, it remains one of the most thrilling highlights in UFC history and a featured part of the pre-main card video montage. 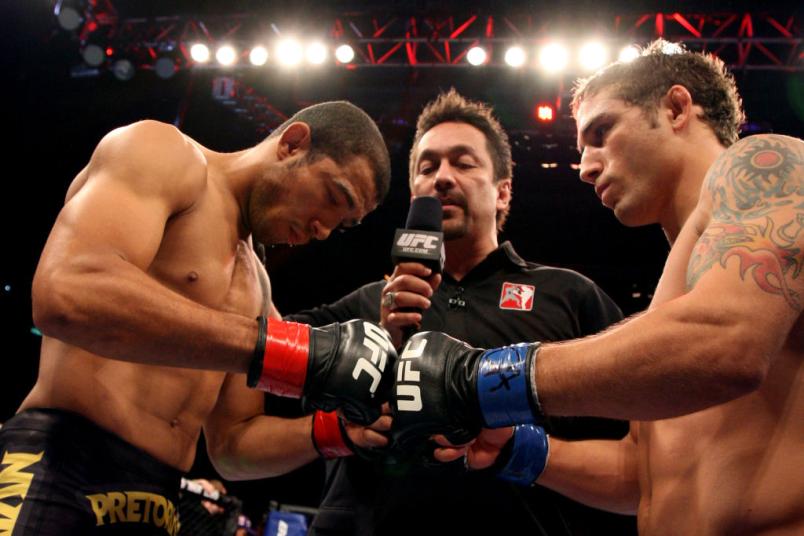 After Barboza kicked off the main card in Rio with a bang, Aldo closed it out with a celebration amongst the crowd.

On a collision course since their days in the WEC, Aldo and Mendes finally crossed paths inside the Octagon, with the challenger going on the road in his quest to claim championship gold.

Mendes wasn’t fazed by facing Aldo in Rio and acquitted himself quite well through the majority of the opening round. Locked onto Aldo’s waist along the fence, he looked to elevate the champion and dump him to the canvas, but the Brazilian stuffed the takedown by grabbing a handful of fence.

He wasn’t penalized, the positions didn’t change, and soon after, Aldo spun free of Mendes’ clutches and blasted him with a huge knee that sent him tumbling to the canvas. There was one second remaining on the clock, but as soon as it landed, it was clear the fight was over.

Elated, Aldo rushed into the stands, celebrating with the raucous crowd, showing why he carried the “King of Rio” moniker throughout his career. 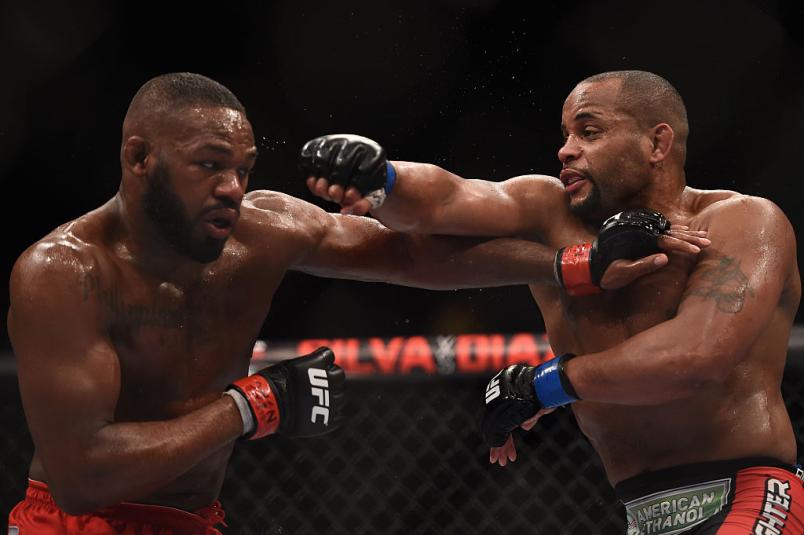 The 2015 UFC calendar kicked off with one of the most highly anticipated grudge matches of all-time.

Jones and Cormier hated each other. Polar opposites in myriad ways and cast as rivals in the light heavyweight division, the build to their first meeting included the infamous brawl at the MGM Grand and the subsequent ESPN interview outtakes that shook the MMA world. The tension was palpable, the expectations sky high, and the fight… was just kind of okay?

Jones dominated the action, frustrating Cormier at every turn, showing that he was the superior talent. He used his length, his excellent grappling, and diverse striking skills to pepper and punish “DC” throughout.

The challenger won a round on each scorecard, but that was little consolation to the dejected Cormier, as Jones cruised and punctuated his victory with a WWE-inspired crotch chop. 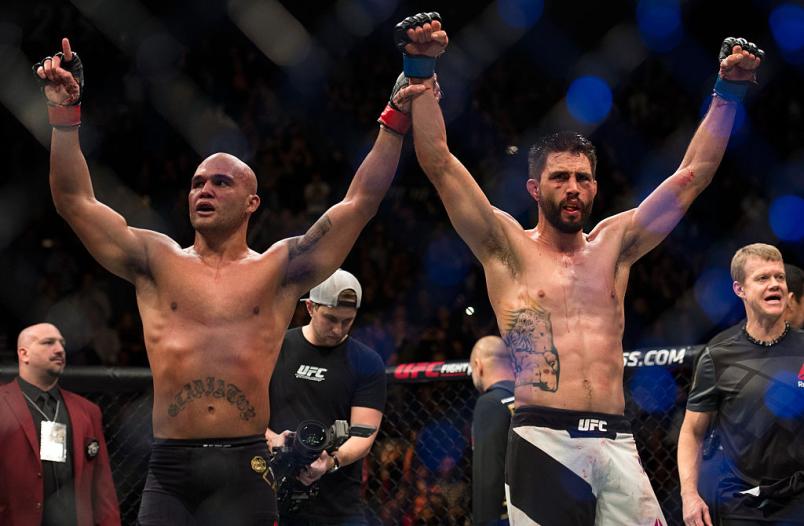 Robbie Lawler and Carlos Condit raise each others hands after their welterweight championship fight during the UFC 195 event inside MGM Grand Garden Arena on January 2, 2016 in Las Vegas, Nevada. (Photo by Brandon Magnus/Zuffa LLC)

Five years after Edgar and Maynard captured Fight of the Year in the first main event of 2011, Lawler and Condit did the same as the duo did battle for the welterweight title.

Lawler was coming off his epic battle with Rory MacDonald at UFC 189 and defending his belt for the second time. Condit, a former interim champion, had made a successful return from a knee injury eight months earlier, dominating Thiago Alves in Brazil to earn his second crack at the undisputed title.

For 25 minutes, the welterweight standouts beat the hell out of each other. The judges were unanimous in how they saw four of the five rounds — Condit winning the first and fourth on all three cards, Lawler the second and fifth, leaving the third as the swing frame. Two of the three judges saw the round for Lawler, awarding the champion the victory, though many believe Condit had done enough to merit the nod.

Just like Edgar and Maynard five years earlier, Lawler and Condit took home Fight of the Year honors, as well. 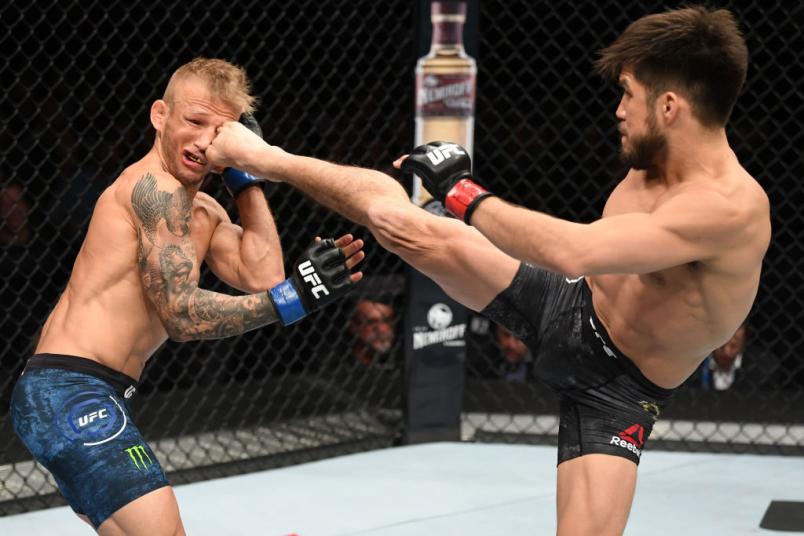 Henry Cejudo kicks TJ Dillashaw in their flyweight bout during the UFC Fight Night event at the Barclays Center on January 19, 2019 in the Brooklyn borough of New York City. (Photo by Josh Hedges/Zuffa LLC)

Not only did this kick off the 2019 slate, but it also ushered in the UFC partnership with ESPN and set course for Cejudo to eventually become a double champ and “Triple C.”

Dillashaw, then the bantamweight champion, sought to venture down to flyweight to dethrone Cejudo, who had claimed the title the previous August with a split decision win over inaugural titleholder Demetrious “Mighty Mouse” Johnson. It was a highly anticipated clash at Barclays Center in Brooklyn, and became an explosive event that kicked off an eventful year inside the Octagon.

Cejudo clipped Dillashaw mere seconds into the fight, earning the stoppage win and the successful defense of his flyweight title in 32 seconds. Two months later, Dillashaw would vacate the bantamweight belt and accept a two-year ban for an anti-doping violation, creating a runway for Cejudo to venture up to the 135-pound ranks and claim the belt for himself with a comeback win over Marlon Moraes.

The legacy of the fight may be everything that came in the aftermath, but Cejudo’s performance was outstanding, and regardless of how a fight earns a place in the annals of history, this one has definitely made its way there. 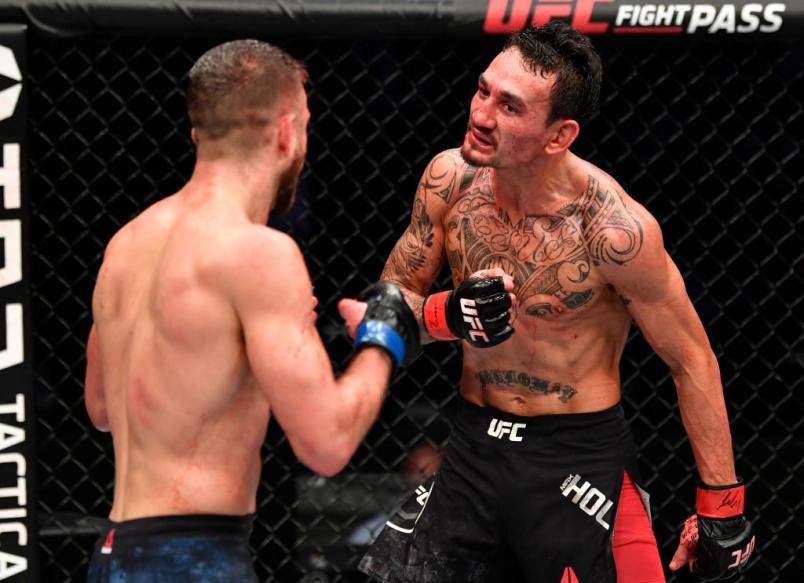 Two years ago, Max Holloway turned in one of the best individual performances in UFC history in the first main event of the year.

Paired off with Calvin Kattar on Fight Island, the former featherweight champion took umbrage to his opponent being christened “the best boxer in the UFC” in the build to the fight and went out of his way to show he was the superior striker.

Holloway set numerous records in the five-round contest, including the most significant strikes attempted and landed, as well as the greatest striking differential in UFC history. But what really made it memorable was his performance over the last half of the final round.

Look Back At UFC Fight Night: Holloway vs Kattar

“Blessed” started talking to Kattar and then the broadcast team stationed outside the fence, all while continuing to bust up the bloodied New England Cartel representative.

“I’m the best boxer in the UFC, baby!” he shouted at the commentary team while sticking a right hand in Kattar’s face and avoiding the return fire even though he wasn’t looking at his opponent. He repeated the line to Kattar and continued to tax him for thinking otherwise, making him pay right up until the final bell.