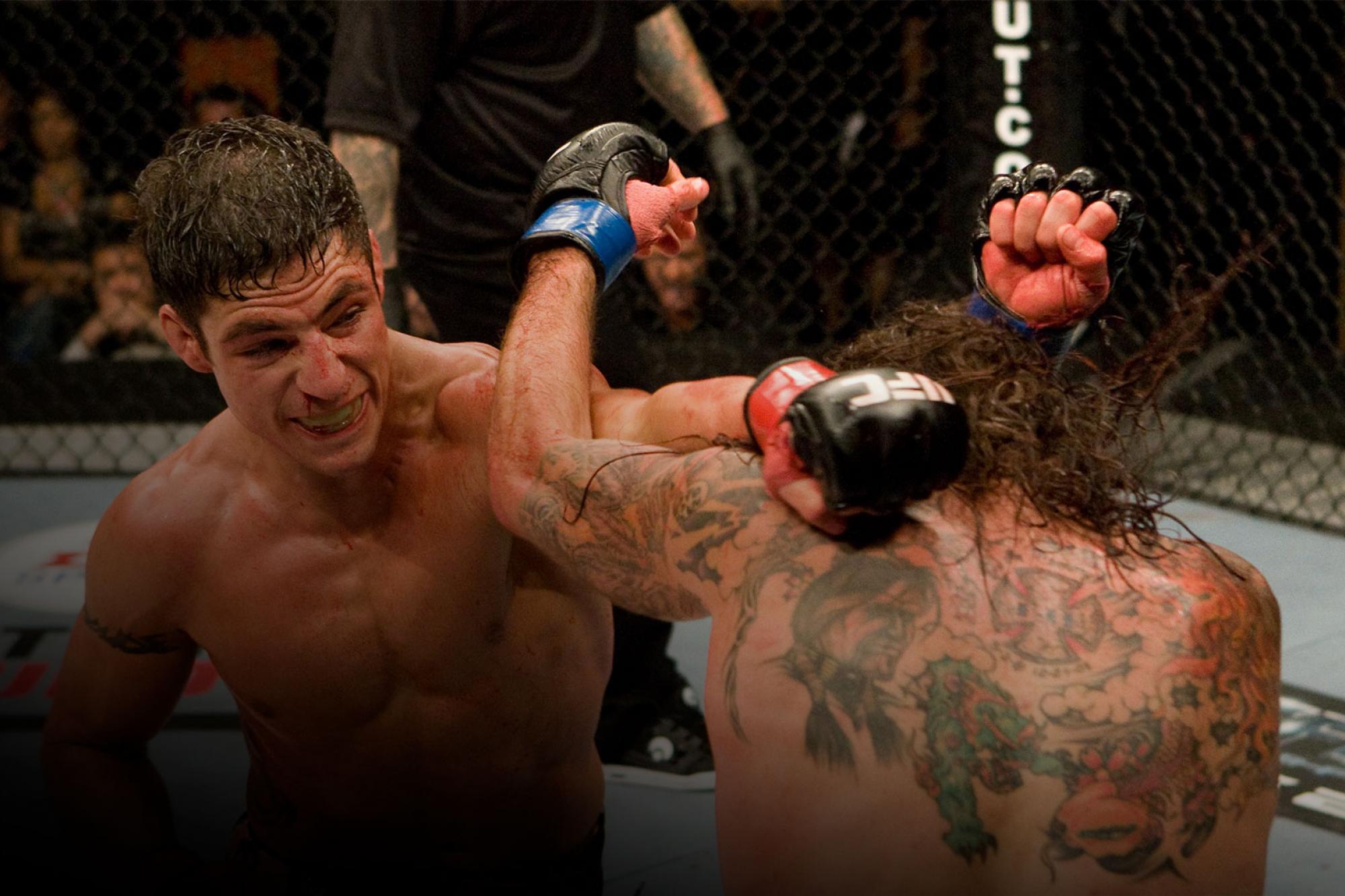 Look back at some of Diego Sanchez's top fights from his historic UFC career
By E. Spencer Kyte, on Twitter @SpencerKyte • Sep. 29, 2020

Diego Sanchez has spent the last 16 years competing inside the UFC Octagon, building a legacy that is far greater than any win-loss record might indicate.

The 38-year-old is one of six men to cross the threshold into the eight-sided proving ground more than 30 times and one of only a handful of fighters to compete in four different weight classes, earning victories in three of them. At one point in the middle of his career, Sanchez earned Fight of the Night honors in six of nine appearances, including a couple contests that garnered Fight of the Year consideration.

As the UFC celebrates Hispanic Heritage Month, we turn our attention to the first man to earn the title of “The Ultimate Fighter” and a true one-of-a-kind competitor, Albuquerque, New Mexico’s Diego “The Nightmare” Sanchez.

In a season filled with unique characters who made a lasting impression with curious fight fans, Sanchez still managed to find a way to stand out inside The Ultimate Fighter House as an enigmatic and mercurial talent who quickly emerged as one of the favorites in the middleweight competition.

After making quick work of Alex Karalexis and Josh Rafferty in the opening two rounds, Sanchez edged out Josh Koscheck to punch his ticket to a showdown against Kenny Florian in the middleweight finale, where the promising New Mexico native made history.

They spent the opening minute of the fight circling one another, with Sanchez manning the center of the Octagon and Florian bouncing around the outside, but once Sanchez committed to closing the distance and got the fight to the ground, he dominated.

Though Florian worked hard to keep Sanchez at bay, the size and strength difference between the two men was too much, as Sanchez looked to pass while dropping hammers from on high. Just before the midway point of the opening round, Sanchez climbed into mount and started raining down elbows, leaving Florian with an impossible choice: give up your back and get choked out or remain with your back to the canvas and catch wreck.

Florian opted for the latter and Sanchez obliged, punishing him with heavy ground-and-pound, prompting the fight to quickly be halted.

Sanchez earned a UFC contract and became the first person to earn the title of “The Ultimate Fighter,” a designation he still carries with pride to this day.

Over the course of UFC history, there are some terrific fights that have fallen victim to history — epic encounters that have been lost in the shuffle as the schedule expanded, coverage of the sport intensified, and the initial wave of fans who remembered those classic encounters ceded their position to a new generation of observers who are more fixated on what’s happening now than what happened in the past.

This is one of those fights.

Sanchez was unbeaten at the time and climbing the welterweight ranks. Parisyan was 15-3 overall, having won nine of his last 10 appearances and five straight heading into this one. They were two of the top emerging talents in one of the deepest divisions in the UFC and everyone expected their clash in Las Vegas to be exhilarating.

And it still managed to exceed expectations.

Sanchez came out of the gate like a man possessed, putting Parisyan on the canvas in a hurry and quickly taking his back, busting him up and chasing a choke in the opening minute. Parisyan responded in kind once they returned to the feet, sweeping Sanchez to the ground and scoring with ground-and-pound of his own. That back-and-forth, give-and-take continued for the entire 15-minute affair.

Each time one man started building momentum, the other found a counter, with both men having success taking the other down and the striking exchanges running level. It was tactical and technical, featuring a bevy of impressive scrambles and grappling exchanges that carried this clash to Fight of the Year consideration.

More than 14 years later, bringing up this fight can still kick off a heated debate, as Sanchez emerged with a unanimous decision victory that many remain adamant should have went the other way.

Regardless of the verdict, this was the first — but certainly not the last — instant classic in the lengthy UFC career of Diego Sanchez and one that deserves to be talked about as frequently and fondly as the others.

2009 saw Sanchez make the decision to depart the welterweight division for the lightweight ranks, where he began his adventure in the 155-pound weight class in a main event showdown with fellow Ultimate Fighter winner Joe Stevenson at UFC 95 in London, England. No one was quite sure what to expect from a slimmed down version of Sanchez, who had always relied on pace and conditioning during his largely successful stay in the welterweight division.

But as they settled into a rhythm, this turned into a bullfight, with Sanchez playing the matador to Stevenson’s approaching bull. Each time Stevenson would close the distance, Sanchez would attack, offering greater variety and diversity of attacks, landing the more significant blows against the former title challenger.

In his first lightweight appearance, Sanchez immediately proved that he was a contender and a potential force in the division, sweeping the scorecards against a talented veteran foe while collecting another Fight of the Night bonus for his efforts.

This fight was inducted into the UFC Hall of Fame in 2019 and it only takes about 12 seconds of watching it back to understand why. From the jump, this one was all-out, frenetic action and there was no point where it let up.

Honestly, if I was tasked with making a list of the best individual rounds in UFC history, the first round of this fight would most likely man the No. 1 spot; it’s that good. This fight took place more than a decade ago and I’m not sure I’ve seen a blow that I was sure was going to end the fight but didn’t like the kick Guida ate midway through the opening round.

If the opening round wasn’t enough to cement this fight in the pantheon of all-time greats, the ground-and-pound battle in the closing moments of the second certainly helped get it there, as Sanchez unleashed savage elbows from the bottom while Guida tried to maul him from top position.

In the third, their hands and bodies were tinted red by all the blood that had been spilled over the opening 10 minutes, they stayed after it, smashing each other with strikes in space before settling in for a tight final minute on the canvas, where Sanchez hunted for submissions and Guida defended before finishing out the frame with a couple heavy shots from on top.

Sanchez walked away with the split decision victory, both men took home a well-earned Fight of the Night bonus, and the contest landed at the top of myriad Fight of the Year lists before being enshrined in the UFC Hall of Fame last summer.

While the other fights on this list are all victories for Sanchez, this is one where he landed on the wrong side of the results, but it still stands out as one of his best performances inside the Octagon because it showcases the indomitable will that continues to propel him into the cage to this day.

Melendez handily won the opening round, controlling the striking exchanges and opening up a sizeable cut over the left eye of Sanchez, but it only seemed to spur him on. Once the blood started spilling down his face, Sanchez went on the offensive, landing his best strikes of the round and seemingly stinging Melendez to the body before eating one on the chin that sat him down right before the horn.

The action in the second was more of the same, with Melendez landing the better blows throughout, but Sanchez having a few quality moments of his own and refusing to go away. As the third began, Melendez was fully in charge, which forced Sanchez to wade into the fire, looking to land a fight-changing blow.

About a minute into the round, the two veterans just started slinging and once again, it seemed to draw out the best from Sanchez, who called for more and chased down Melendez, the left side of his face coated in blood. After a pause in the action to check on the gnarly cut over Sanchez’ left eye midway through the final stanza, these two really started to get after it, trading punches before Sanchez landed a right uppercut that sent Melendez crashing to the canvas.

Sanchez chased him to the ground, hunting for submissions, but couldn’t find one, and they ended up back on their feet, with the crowd at the Toyota Center joining them. When the 10-second clacker sounded, both men planted their feet and started firing, trading bombs through to the horn.

Though he landed on the wrong side of the scorecards, there is no way to put together a list of the greatest fights in Diego Sanchez’ career without including this epic encounter in Houston, Texas. Lesser men would have wilted at various points throughout the contest, but Sanchez never stopped pressing forward, trading bombs with the former Strikeforce champion for 15 wildly entertaining minutes.