Look back at five of the best fights from Anthony Pettis' career
By E. Spencer Kyte, on Twitter @SpencerKyte • Oct. 6, 2020

There are a lot of inappropriate nicknames in mixed martial arts, but Anthony Pettis has proven over the course of his 14-year career that he is more than deserving of the name “Showtime” by building a resume of chock full of highlight reel finishes and performances that have stood the test of time.

The 33-year-old fighter, who earned a unanimous decision win over familiar foe Donald Cerrone last time out at UFC 249 was born, raised, and continues to reside in Milwaukee, Wisconsin, and he has always represented his Hispanic heritage with pride.

Here’s a look at five of the Pettis’ most breathtaking performance inside the UFC cage.

Fine — this one took place in the little blue cage of the WEC, but there is no way that one of the most iconic highlights in MMA history wasn’t getting mentioned in this collection.

Pettis was 23 years old at the time, entering on a three-fight winning streak and brandishing a 12-1 record overall as he squared off with Henderson in the final fight in WEC history. Henderson was on an even bigger roll, having rattled off 10 straight victories, including back-to-back submission wins over Jamie Varner in a title unification bout and “Cowboy” Cerrone in his first successful title defense.

Not only was the WEC lightweight title on the line, but with the roster soon to be folded into the UFC ranks, the victor would move to the Octagon as the No. 1 contender for the UFC lightweight title, with the expectation being that a “Champion vs. Champion” clash would happen in the first half of 2011.

For nearly 24 minutes, these two were locked in a back-and-forth battle where neither man had really managed to pull ahead by a considerable margin. Most people had it deadlocked at two rounds each heading into the fifth and final round, and through the first four minutes of the frame, they remained neck-and-neck.

Then Pettis did something no one had ever seen.

As Henderson stepped away from the fence, Pettis sprinted toward it, propelled himself off the cage with his right foot and swung it around, kicking Henderson dead in the face, sending the champion down to the canvas. Pettis followed Henderson to the floor, looking to secure the finish, and while “Smooth” weathered the storm, “The Showtime Kick,” as it would quickly come to be known, had shifted the scorecards in the challenger’s favor.

Pettis took home the victory and the WEC title, and his inventiveness inside the cage became an indelible memory in the minds of every MMA fan around the globe. To this day, it remains the most creative and clutch attack I’ve ever witnessed in a championship fight.

UFC ON FOX 6 VS. DONALD CERRONE

The first time Pettis and Cerrone crossed paths came in early 2013, when both were trying to work their way into the championship mix in the UFC lightweight division.

“Showtime” had earned back-to-back victories after dropping his promotional debut, but hadn’t fought in nearly a year, while the always active “Cowboy” came in off consecutive victories over Jeremy Stephens and Melvin Guillard and having won eight of his previous nine appearances. On top of that, there was some tension between the two as Cerrone had been chasing the fight for some time and Pettis’ struggles with injuries kept the two from sharing the cage for longer than the ornery gunslinger would have liked.

They came out slinging right away, with Pettis landing a right hand early and Cerrone countering with a knee up the middle prior to “Showtime” attempting a cartwheel kick. The speed difference between the two was apparent early, as Pettis repeatedly countered Cerrone’s offerings and settled into working from the southpaw stance.

A heavy kick to the body at the three-minute mark of the opening stanza stung Cerrone, who did his best to maintain his poker face, but Pettis wasn’t fooled. He walked Cerrone down, hitting him with a lunging knee as “Cowboy” dipped his head, then propelled himself off the fence to land a knee to the other side of Cerrone’s midsection seconds later.

Another swift kick to the body followed and folded over Cerrone, bringing the fight to a close and putting Pettis back on the short list of title challengers in the 155-pound weight class.

Every so often in sports, the stars align to create a magical moment, and this was one of those times.

After bringing down the curtain on the WEC together, Pettis and Henderson took divergent paths to the top of the UFC lightweight division, with Pettis losing his debut to Clay Guida after his immediate title shot was put on hold and Henderson collecting a trio of victories, capped by a win over Guida, before claiming the title from Frankie Edgar at UFC 144.

Having successfully defended his title three times, Henderson was originally slated to face gritty Canadian TJ Grant, while Pettis had been booked to venture down to featherweight to fight Jose Aldo before having to withdraw due to a knee injury. When Grant fell out of his fight with Henderson, the UFC tabbed Pettis to replace him in the main event of UFC 164, which just so happened to be taking place in the challenger’s hometown of Milwaukee.

Entering to a raucous ovation, Pettis made the partisan crowd at the Bradley Center go bonkers as he locked up a belly-down armbar and drew a verbal tap from Henderson prior to the close of the opening round. Henderson had been leading the dance and doing the majority of the damage to that point, and was the one to initiate the grappling exchange that ultimately led to the finishing sequence, but in that moment, Pettis showed that he had a slick submission game to go along with his flashy striking repertoire.

For the second time in his career, Pettis came through with a well-timed attack to win championship gold from his good friend and fierce rival Benson Henderson, establishing himself as the best lightweight on the planet. 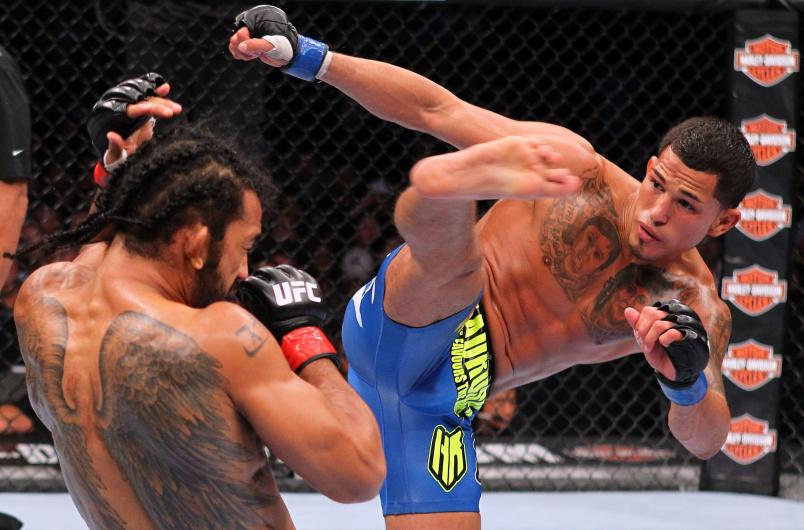 This one took place nearly five years after Pettis’ championship win at home in Milwaukee, and with the perception of “Showtime” having shifted dramatically.

He only defended the lightweight title once, then lost three straight before dropping to featherweight, where he struggled to make the 145-pound limit and was stopped for the first time in an interim title showdown with Max Holloway. He returned to lightweight midway through 2017 with a good win over veteran Jim Miller but lost to Dustin Poirier four months later when he popped a rib mid-fight.

People were wondering what Pettis had left in the tank and if his days of competing with members of the Top 15 were behind, and with Chiesa looking to rebound from his weird submission loss to Kevin Lee the previous summer, many anticipated that the ascending former Ultimate Fighter winner would score  is biggest career victory by toppling the former titleholder.

But Pettis had other plans.

The much bigger Chiesa, who missed weight ahead of this contest and moved to welterweight after, looked to grapple and took the fight to Pettis, who was able to weather those exchanges, threatening with submissions at times, defending well and repeatedly working his way back to his feet. Late in the first, Chiesa started to fade and Pettis started to find his range, attacking with kicks and avoiding anything coming back his way.

Early in the second, Pettis stung Chiesa with a kick to the body and followed it up with a right hand that caused Chiesa to slump before hitting him with a jumping knee-kick hybrid that put him on the deck. Pettis followed him to the canvas and tried to lock up a guillotine. Though he couldn’t secure the choke, he quickly threw his legs up and latched onto a triangle choke, clamping down and forcing Chiesa to tap.

Once again, “Showtime” had shown that despite his undeniable striking skills, he’s an outstanding grappler as well.

Pettis came into 2019 with a different mindset. Rather than worrying about championship belts and his position in the rankings, the former lightweight titleholder wanted to chase interesting fights, either at lightweight or welterweight, and when the opportunity to share the cage with “Wonderboy” was presented to him, the Milwaukee native jumped at the opportunity.

Although he didn’t look out of place competing in the 170-pound ranks for the first time in his UFC career, Pettis couldn’t muster any offense through the early stages of the five-round main event. Thompson controlled the distance and landed at will, darting in and out with stiff shots and quick retreats to bust Pettis up without taking any real damage in return. “Wonderboy” was perfectly content to keep going at this pace into the waning seconds of the second round before Pettis did what Pettis had done many times throughout his career.

Out of nowhere and with incredible quickness, Pettis lunged forward with a Superman punch that landed flush, sending Thompson to the canvas in a heap. Less than 10 seconds before he headed back to his corner down two rounds and dealing with a busted-up face, Pettis found a way to secure a victory in the blink of an eye.